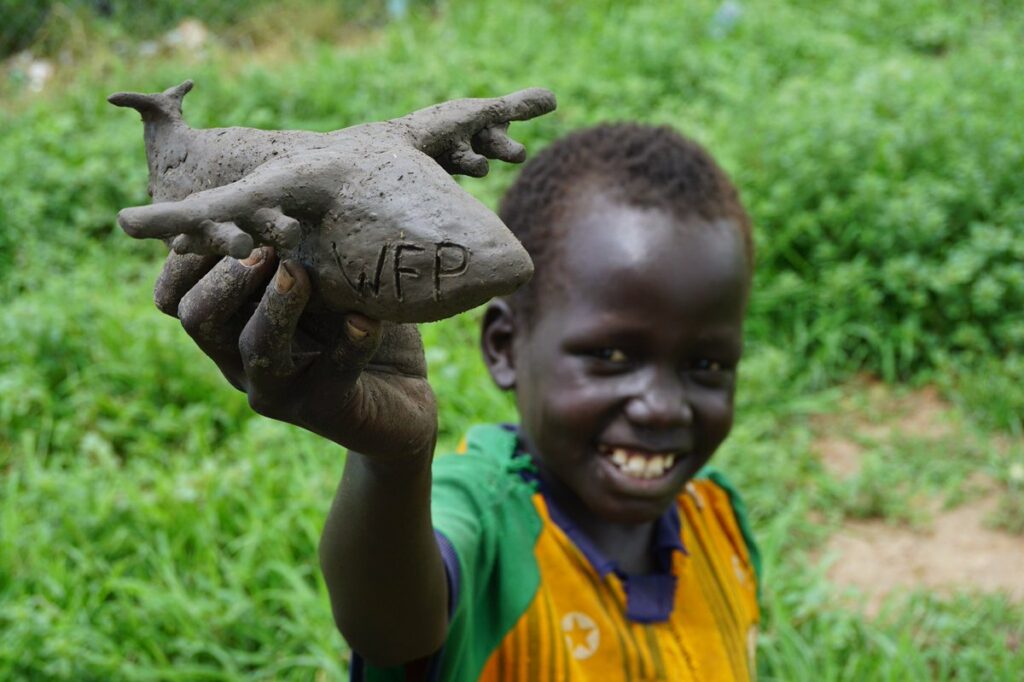 Rohingya children living in exile in Bangladesh have used discarded everyday objects – bottle caps, bits of plastic and metal, even a small AA battery – to create toys in the refugee camps they call home. In places like South Sudan, Syria and Yemen, war has disrupted the childhoods of millions of boys and girls – but glimmers of joy and hope still peek through in the form of hand crafted tin trucks and clay planes.

Below are scenes from across the globe, captured by our own United Nations World Food Programme (WFP) photographs. Clay molded into a toy camera, an empty can of vegetable oil fashioned into a U.N. World Food Programme truck, a racing car built from plastic bottles – they’re all reminders of young imaginations undimmed by violence and poverty. 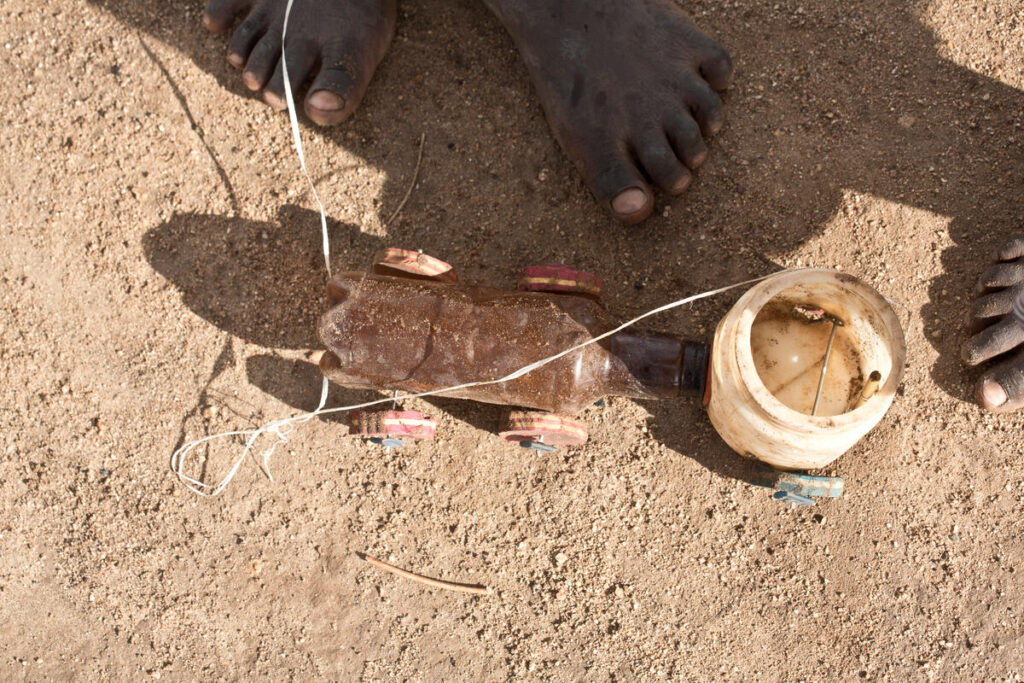 Refugee children create toys from recycling at BidiBidi, a refugee settlement in Uganda.

The conflict in South Sudan has displaced millions of people – many of whom have fled to Uganda, where this photo was taken. The inventive toy above – a truck made from bottles and bottle caps – is a poignant reminder that even in the most dire conditions, you’ll still find the creativity of children at play. 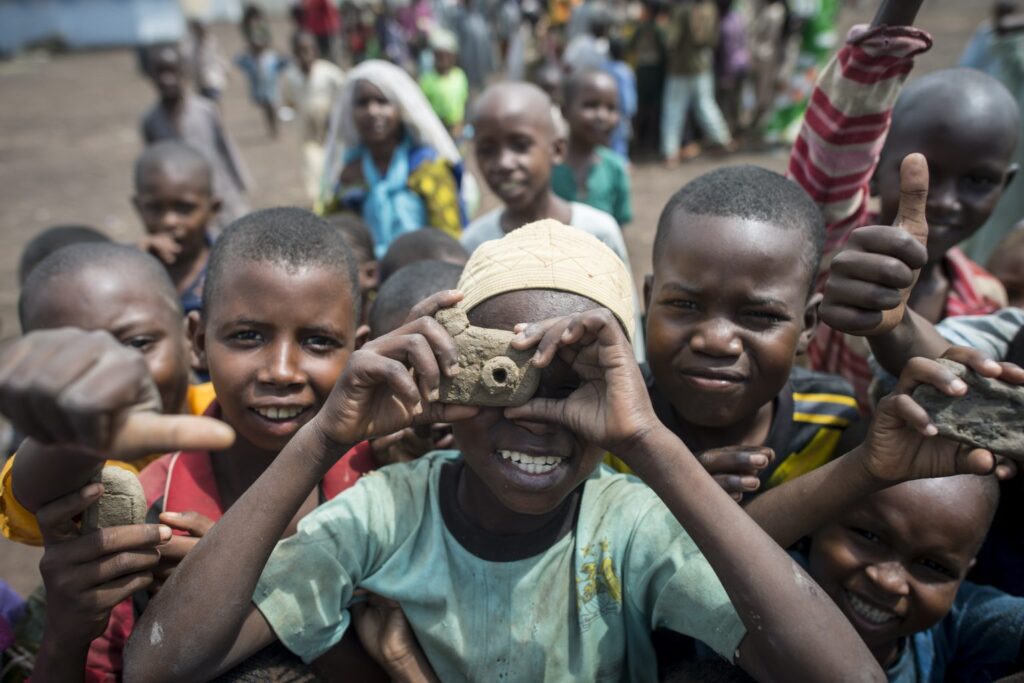 A kid in Cameroon turns the tables on a WFP photographer with his own handmade camera made of clay.

Conflict is by far the number one cause of hunger, and it’s especially cruel to children. Nearly 50% of the world’s refugees are girls and boys under the age of 18. In many cases, these children and their families were forced to flee their homes with nothing but the clothes on their backs.

Separated from their homes, their communities, their countries, most now rely on emergency food assistance from the U.N. World Food Programme to survive. When disaster strikes, hunger is often the first emergency – and children are the most vulnerable.

“Children are the most affected,” Rose Ogola, a former U.N. World Food Programme staffer, said of her experience traveling across South Sudan, a country hit hard by conflict, extreme weather and hunger. 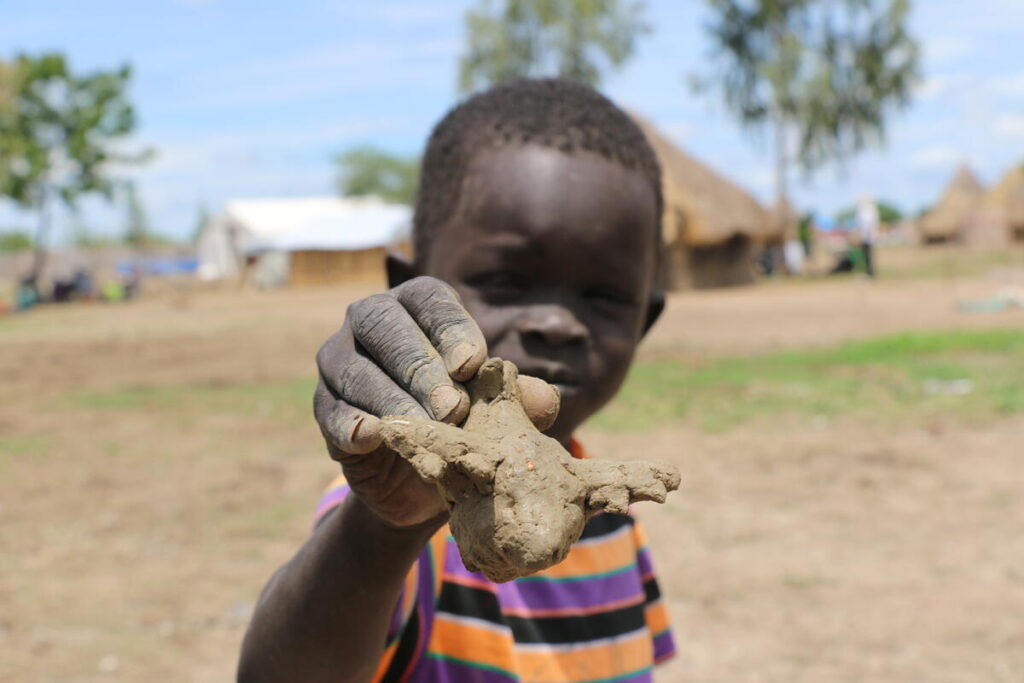 Using clay, Peter Mabor molded an Ilyushin IL76 cargo jet with a capacity of 42 tons. He knew exactly what they look like, since he has seen air drop of tons of food in his community in South Sudan. 1.4 million children are acutely malnourished in the country. In addition to being the world’s youngest nation, South Sudan has one of the world’s youngest populations. “Close to half – about 45% of the people – are below the age of 14,” said Ogola in 2017.

Yet even in the bleakest circumstances, children can still manage to find happiness and play together. 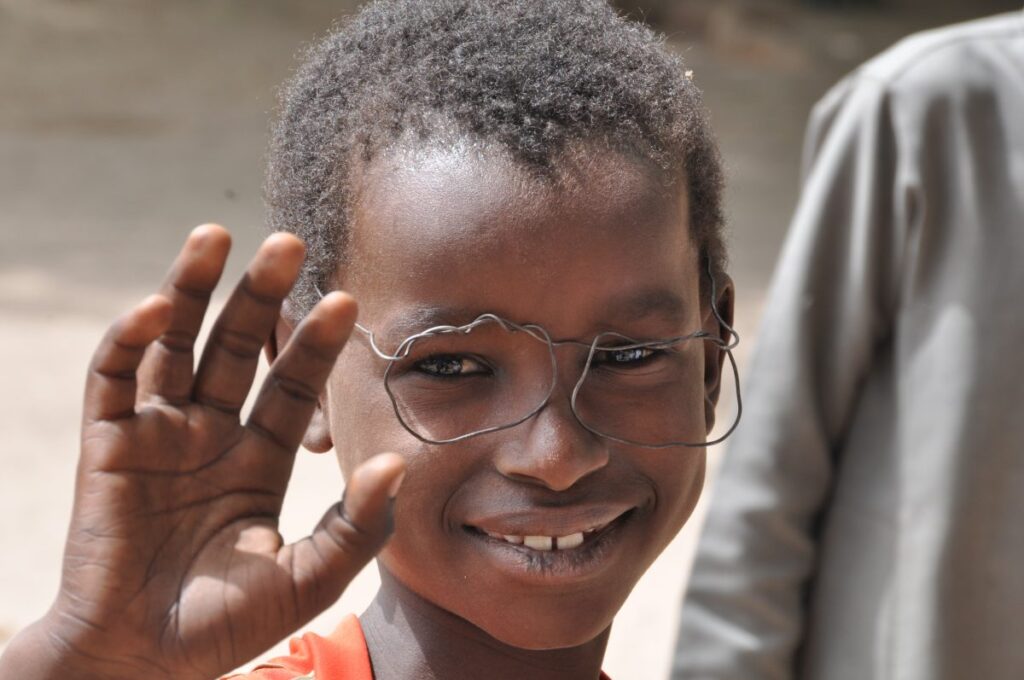 A boy wears homemade glasses he made during a distribution of high-energy biscuits in Chad.

“No matter where I go, I’ll see kids laughing and joking and when they see me with  my camera, they want me to take their picture,” U.N. World Food Programme staffer Dina El-Kassaby said of the children she’s met on her travels to Syrian refugee camps across the Middle East. “So these kinds of things make me remember that kids will be kids.” 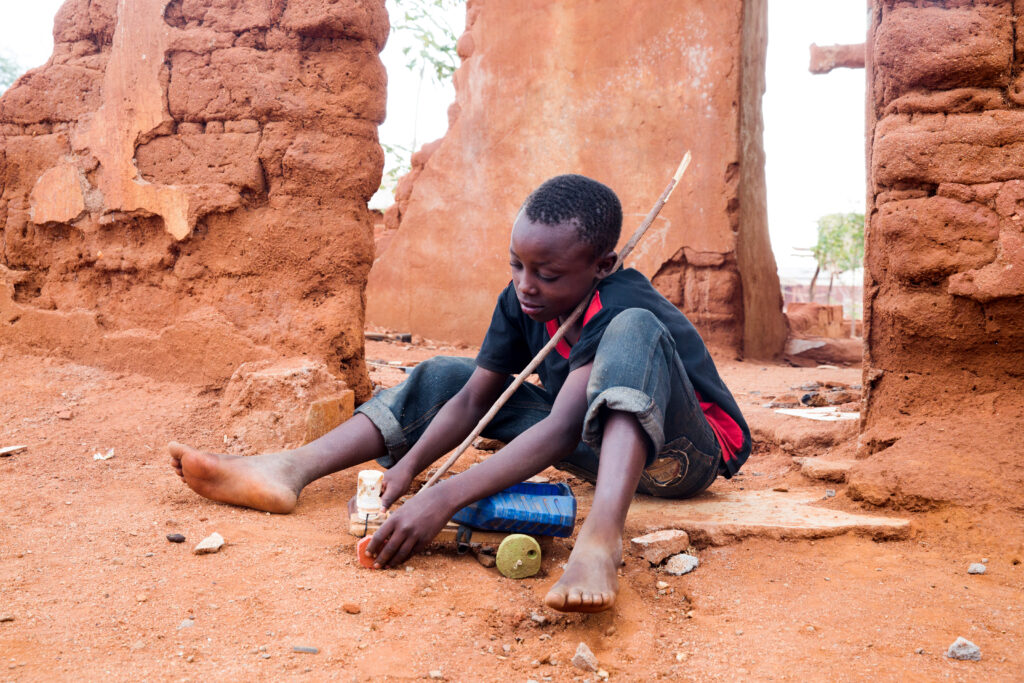 A boy in Dodoma, Tanzania with a racing car he made out of sticks, string and an empty water bottle.

“The kids are always surprising,” Alex Murdoch, a U.N. World Food Programme communications officer, says of the children she met in camps near Mosul, Iraq who had been displaced by ISIS.

“Because what you realize is that actually as long as they’ve had something to eat and they’re fairly amused, a lot of the kids seem pretty happy wherever they are.”

When conflict erupts and families flee, food is one of the first things people lose access to – and the smallest, youngest humans are among the most vulnerable. For millions of the world’s most vulnerable children, food assistance from the U.N. World Food Programme can keep them healthy and well-nourished.

Donate here to support our work. Our lifesaving food fuels hopes for a better future and keeps children creating, dreaming, imagining and playing.

Stories used in this blog originally appeared in The Washington Post on December 5, 2017.