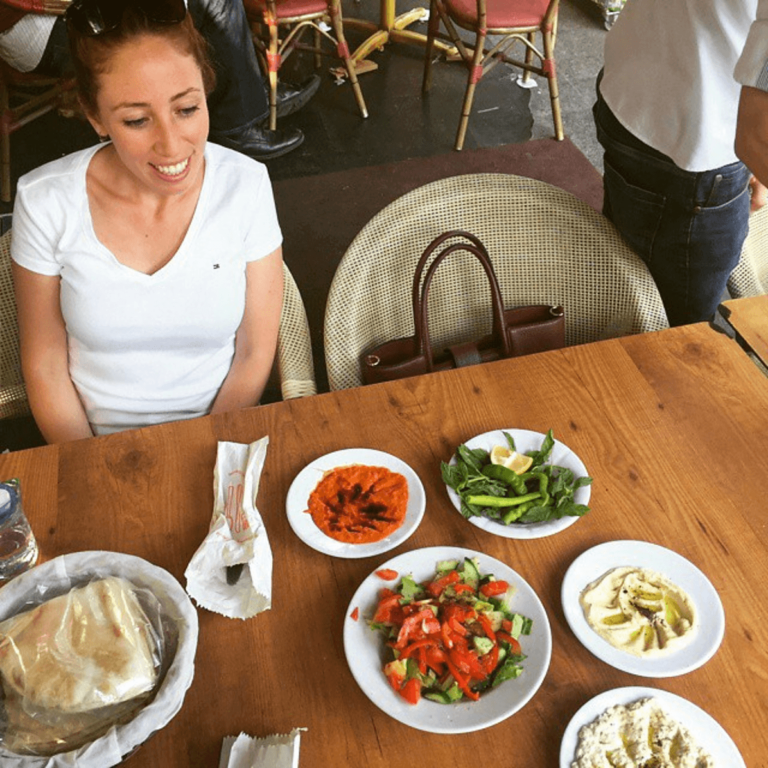 Inside a Syrian Kitchen

As a child growing up, Dalia fell in love with Syrian dishes like harra biisbaou — a dish of stewed lentils and dumplings flavored with tamarind syrup, fried garlic, crispy onions and cilantro.

DALIA: “My grandmother used to spend weekends preparing for these massive dinner parties, preparing tons and tons of Syrian food. And I remember just sneaking into the kitchen, sneaking bites of this sweet clotted cream that’s flavored with orange blossom syrup…”

Her reverence for the food of her homeland — beautifully captured in the New York Times in September — inspired Dalia to launch Savoring Syria, a project designed to document Syrian kitchens in exile.

By spending time with Syrian refugees in different parts of the world, she aspires to share their stories to help people better understand the essence of Syrian food as well as the cultural traditions that ground it.

DALIA: “I remember I was interviewing a refugee in Istanbul …They were in this damp apartment, there was an extended family, maybe 7-10 people living in this small apartment … She said you can leave whenever you want but not until we have dinner. Because there has to be bread and salt between us. That is how we solidify our bond.”

During her last trip to Syria, before the war broke out, food served as a universal language — one that transcended backgrounds and borders among the distant relatives and new friends she met.

Her journey highlights how recipes passed down through generations are helping Syrian families displaced by violence preserve their culture and identity.

Listen to the full podcast episode below.

Some of the reasons why cooking and eating are very important to Syrians are found in history, dating back thousands of years.

Syria was the birthplace of agriculture, and the culinary cuisine of cities like Aleppo were at times the envy of many.

DALIA: “… Its region is a place where culinary culture has been rich for thousands of years … There’s land masses known as the Fertile Crescent – it’s where chefs used to become very inventive in cooking and during the Ottoman Empire, the Sultans would send their chefs to spy on chefs in Aleppo in Northern Syria which is the culinary capital of Syria.”

When Dalia Met Mahmoud, a Syrian Chef and Refugee

Months ago, Dalia put together a special event in Washington, DC featuring Mahmoud Al Hazaz, a Syrian chef and refugee who was relocated to Memphis, TN after his restaurant and home in Homs, Syria was impacted by the war.

The gathering of three dozen strangers was a powerful opportunity to hear from Mahmoud and share a meal together.

DALIA: “I found out about him through I think it was a UNHCR video, when they had decided that he and his family would be resettled in Memphis, Tennessee. They were trying to show different people who are getting resettled, you know, to humanize them. In large part because the rhetoric around the world, but especially in the US right now, is so anti-refugee, is really fear-oriented … Everyone understands food.“

The Joy of Cooking What You Love

During a trip to Istanbul, Dalia had the opportunity to participate in an event put on by the World Food Programme (WFP) at a refugee camp. It was a celebration of the arrival of food vouchers and local grocers to Turkey to give Syrian refugees the chance to procure ingredients and cook their own food and dishes in lieu of receiving prepared meals.

It was a moment of joy during her first trip to a camp to talk with Syrian refugees.

DALIA: “… there was a falafel stand with amazing falafel. A shwarma stand. Like little stands, like food stalls in the middle of this refugee camp. I was just in awe.“

We asked Dalia what she intends to cook the day peace comes to Syria. Hear her response on the full podcast here.