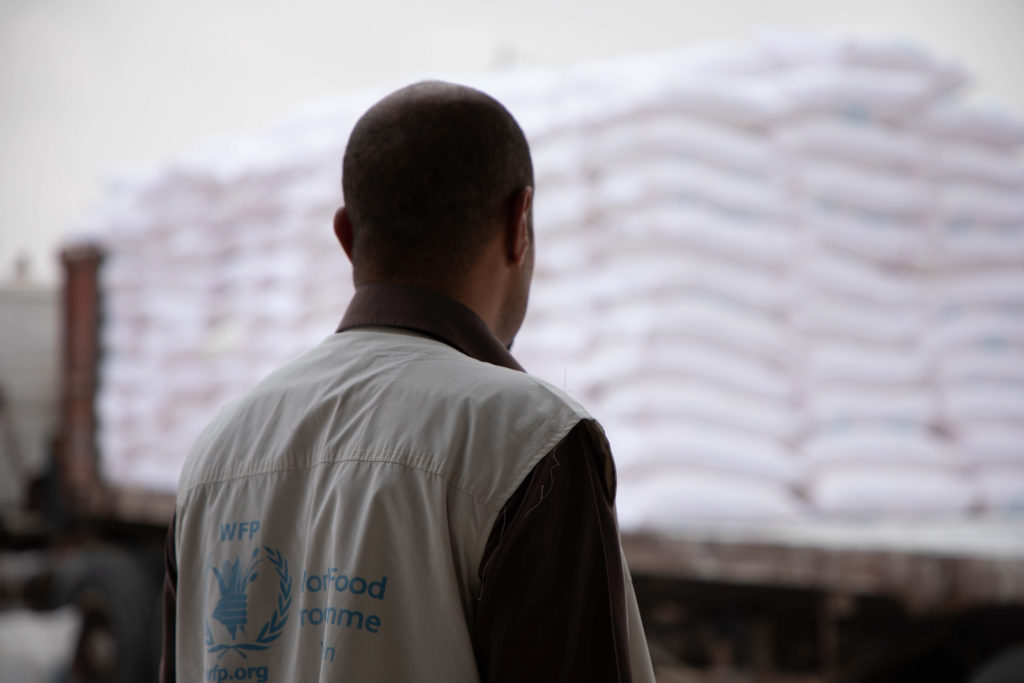 On the Frontlines: A Yemeni Aid Worker on What It’s Like to Live Through the World’s Worst Humanitarian Crisis

In the last few years, Mohammed Ghanim has become all too familiar with the struggles of war. A program officer for the United Nations World Food Programme (WFP), Mohammed lives and works in Yemen, site of the world’s worst humanitarian crisis. He is also from Yemen, born and raised – and like every other Yemeni, he has not been immune to the consequences of conflict. Yet, despite the tremendous hardship he continues to face, Mohammed remains dedicated to helping his neighbors in urgent need.

Inspired by his commitment, we asked Mohammed about the reality of living in Yemen during this difficult time, how the U.N. World Food Programme is working to help, and how he finds hope for his country’s future, even in the middle of war.

“In the past,” Mohammed told us from his office in Sa’ada, “life in Yemen was hard. But war has made it miserable. It is much, much worse.”

When the conflict began more than four years ago, Mohammed was living with his family in Ibb City, in central Yemen. “When war started, everything stopped,” Mohammed said. “Shops closed, electricity went out, banks shut down – which meant even if you had money you couldn’t withdraw it – and fuel became very expensive and scarce.” 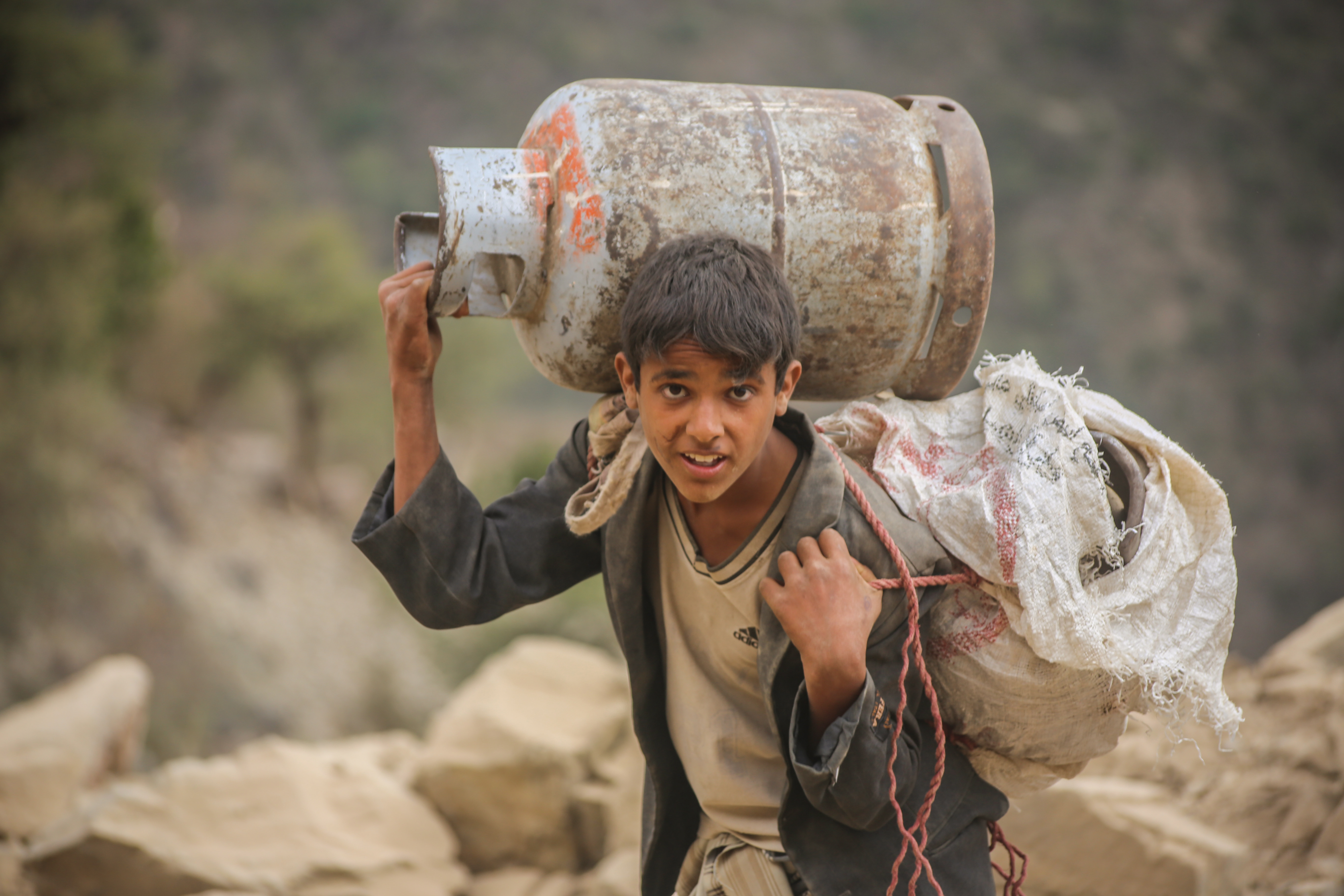 A boy carrying a gas canister and a plastic sack filled with necessities struggles to make his way through the mountain path leading to besieged areas in Taiz city, Yemen.

Mohammed and his family stayed in their home as long as they could. His wife was pregnant, and they had to reserve every last liter of fuel to ensure that he could take her to the hospital when she went into labor. But then airstrikes began, and the danger was too much to bear. Mohammed and his family fled in the middle of the night to a relative’s house outside of town.

“There were gunmen everywhere,” Mohammed recalled. “We could not even turn the headlights on while driving for fear we would get shot.”

Thankfully, his family safely made it out. They moved south, further from the epicenter of airstrikes, and his wife ended up giving birth to a healthy, baby girl.

Some of his neighbors, however, were not as lucky. Bombs killed an entire family of nine on Mohammed’s block. As time went on, Mohammed also lost two brothers. They died not from violence, but lack of access to the medicine they needed to survive. Medicine, transportation and leaving the country – all which would have saved them – were rendered inaccessible or unaffordable. 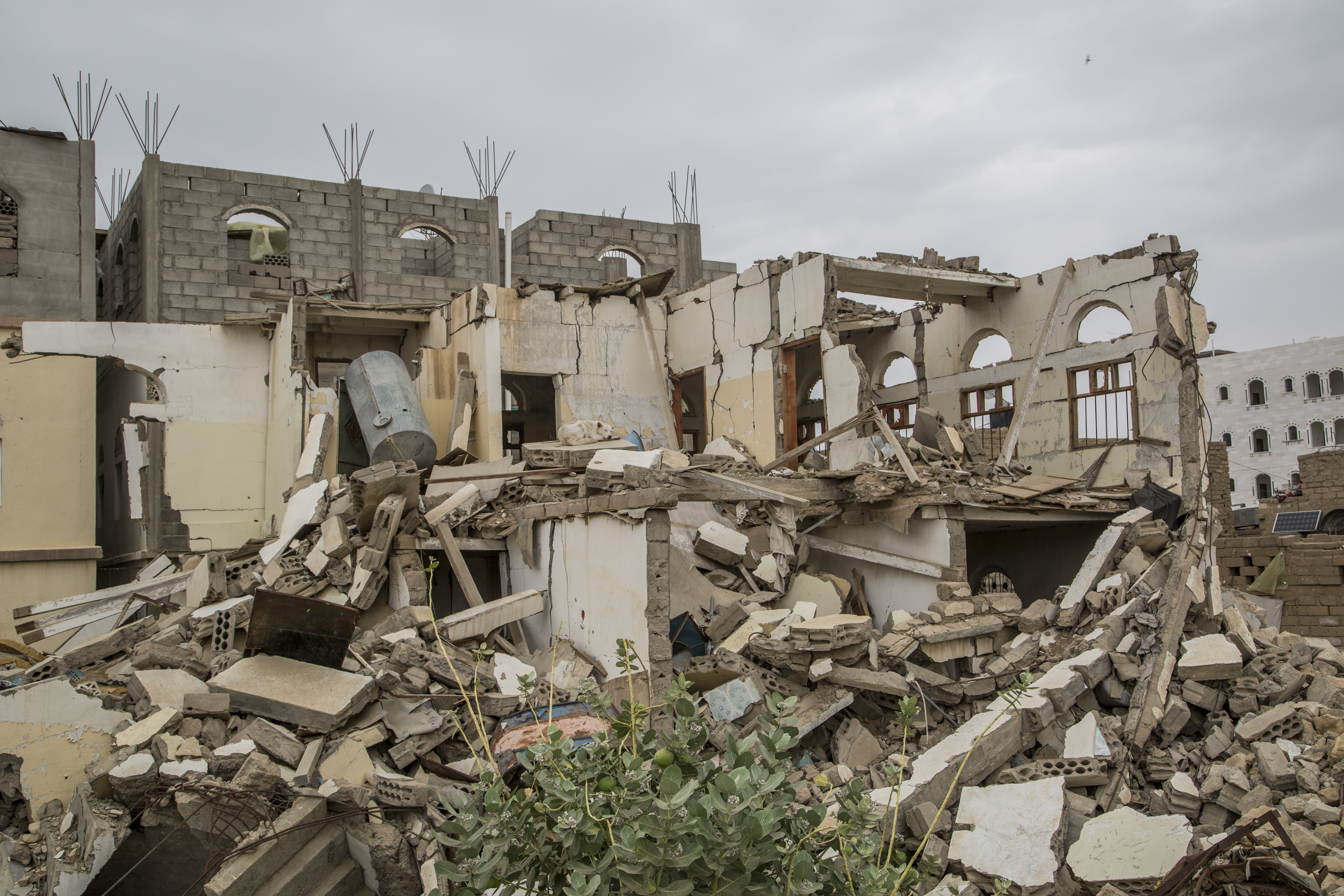 Wreckage in the city of Sa’ada, Yemen, where bombs destroyed many neighborhoods.

Even in the face of such tragedy, Mohammed still considers himself fortunate compared to most. They’ve had to significantly cut back, but his family still has food to eat and a roof over their heads.

“For me,” Mohammed said, “I can bear it. We went through hell, but we try to move on, because my situation is better than others. I still have a job and a salary. Many people have lost their jobs because of war. Public sector employees, like teachers, continue to work but don’t get paid. It is very difficult, and people are really suffering.” 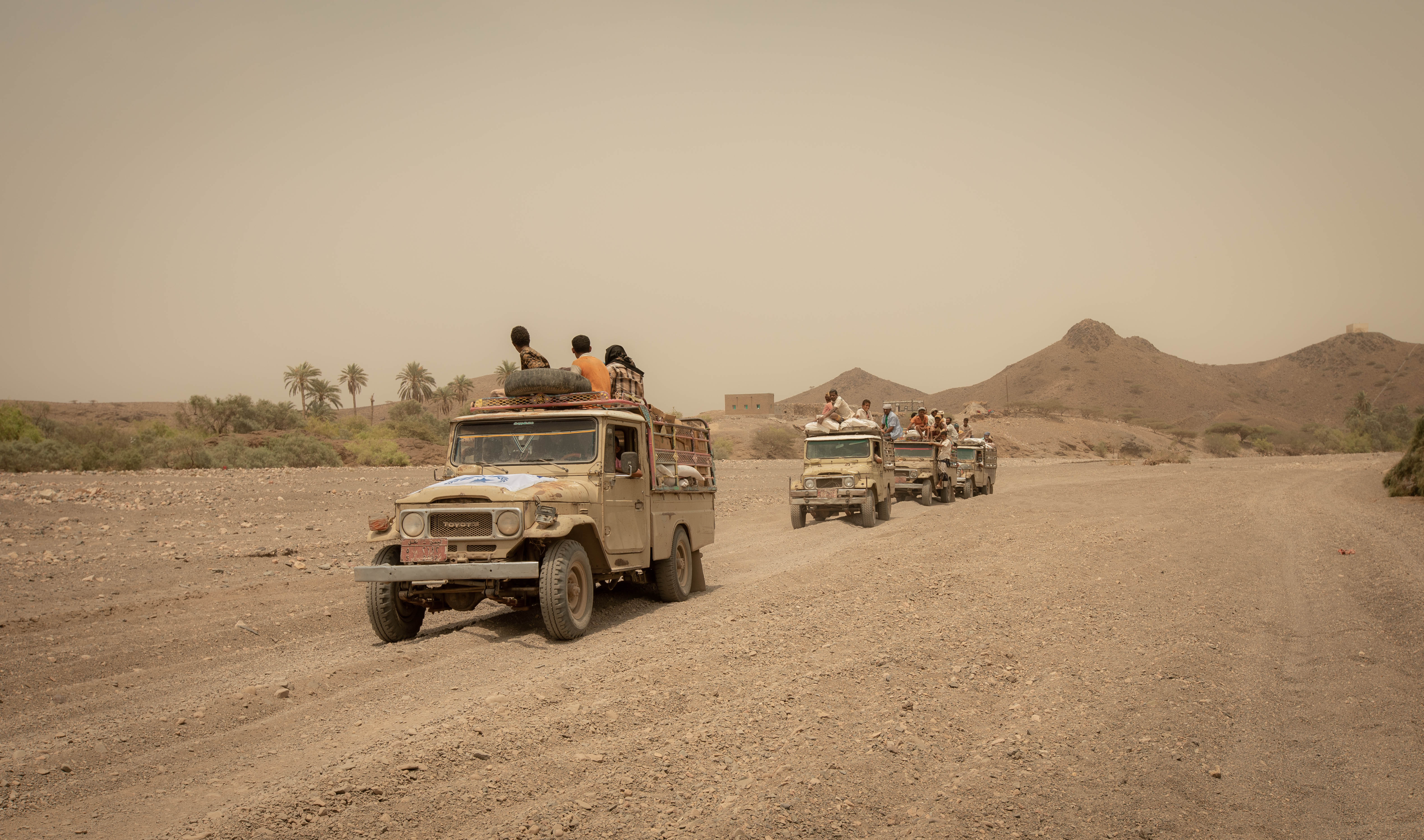 A WFP convoy transports food assistance to a distribution point in Yemen.

“Without U.N. World Food Programme assistance I don’t know what the situation here would be,” Mohammed said. “I mean, it would have been famine from the first moment of war.”

Although hunger is everywhere, Mohammed says that the rural areas have been hit the worst. 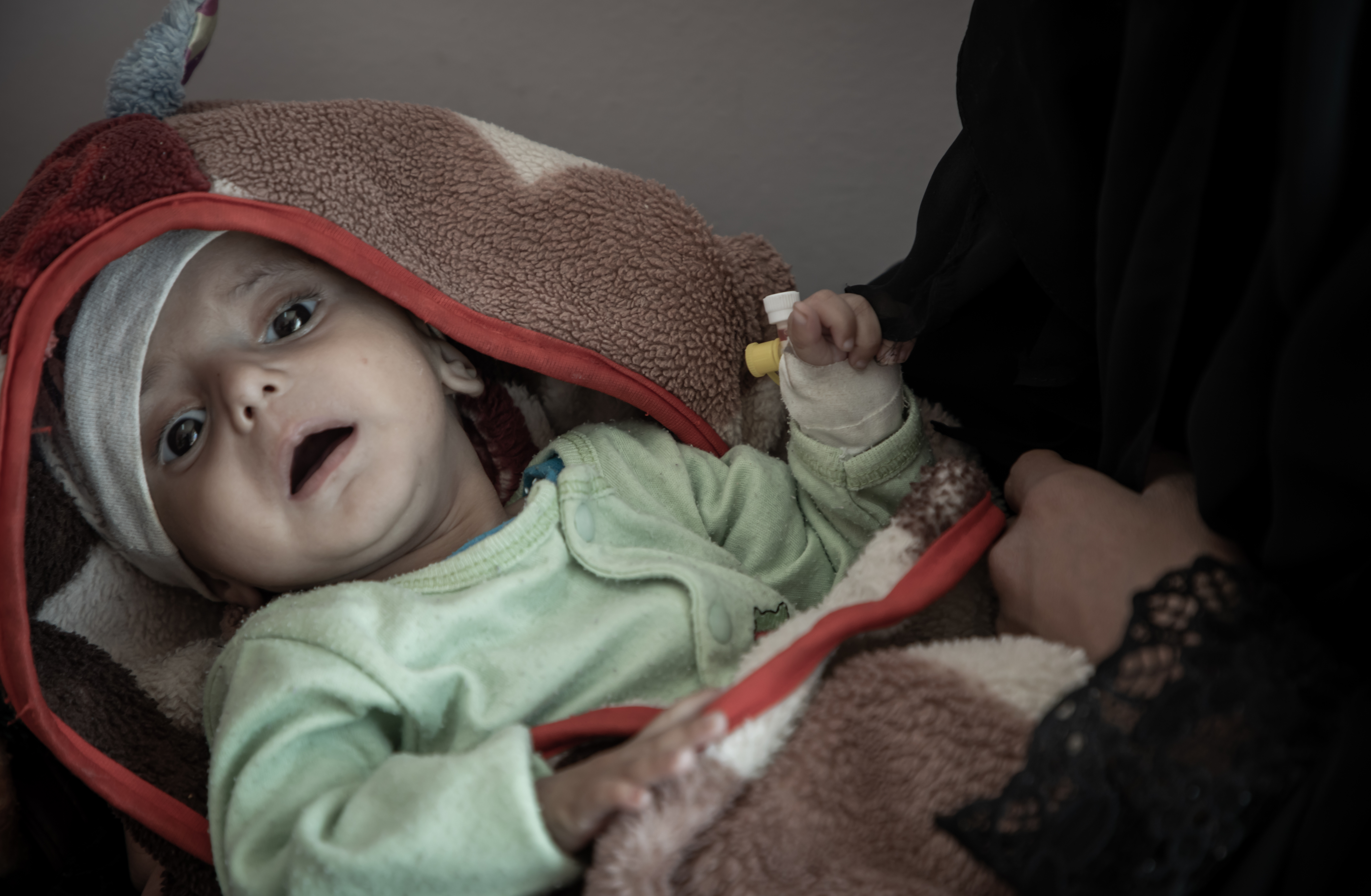 “It’s harder to reach people in the countryside at times. There are many challenges,” Mohammed said. “When I am in the field, I see many, many very skinny people. Many children are also malnourished. At the U.N. World Food Programme we support school meals. I have asked kids about the meals, and they sometimes say that it is the only breakfast or lunch they have. Some of the children only eat half and bring home the other portion for a younger sibling who needs to eat too. I have heard many people say they have nothing. Even my own friends are really struggling. It is really hard.” 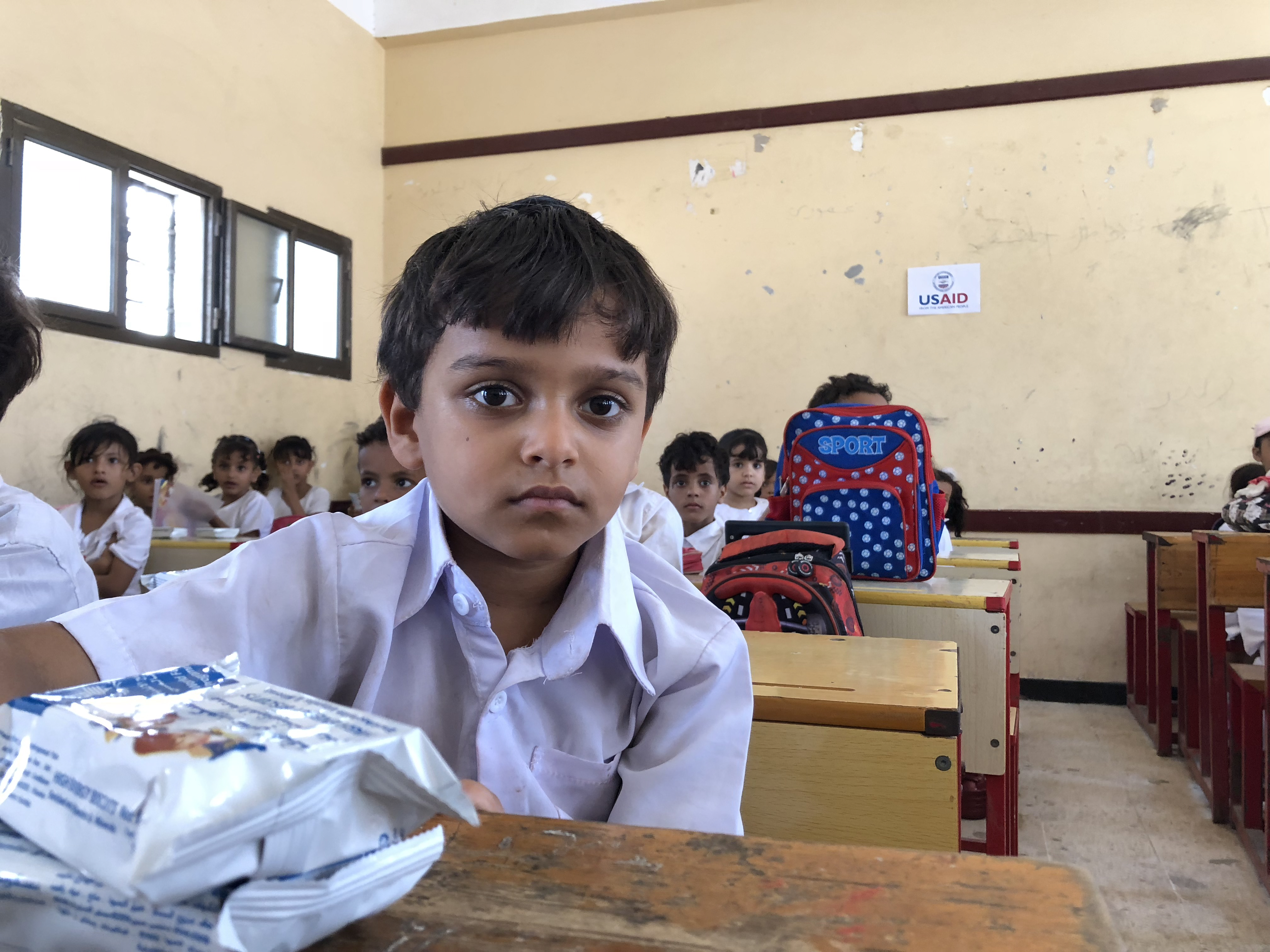 A child receives high-energy biscuits as part of the school feeding program in Aden, Yemen.

Despite the overwhelming difficulties, Mohammed remains hopeful for his country. So hopeful, in fact, that he chooses to stay in Yemen when he has had many opportunities to move to a more stable place.

“I went to university in America and I had a job in Saudi Arabia,” Mohammed said. “You know, to people here, America is like heaven, so they asked me, ‘Why did you choose to come back?!’ I said that if I were to move to America or Saudi Arabia, I want my whole family there – not just my family, my whole community. But they are here, in Yemen. So, I want to make Yemen a good place to live.” 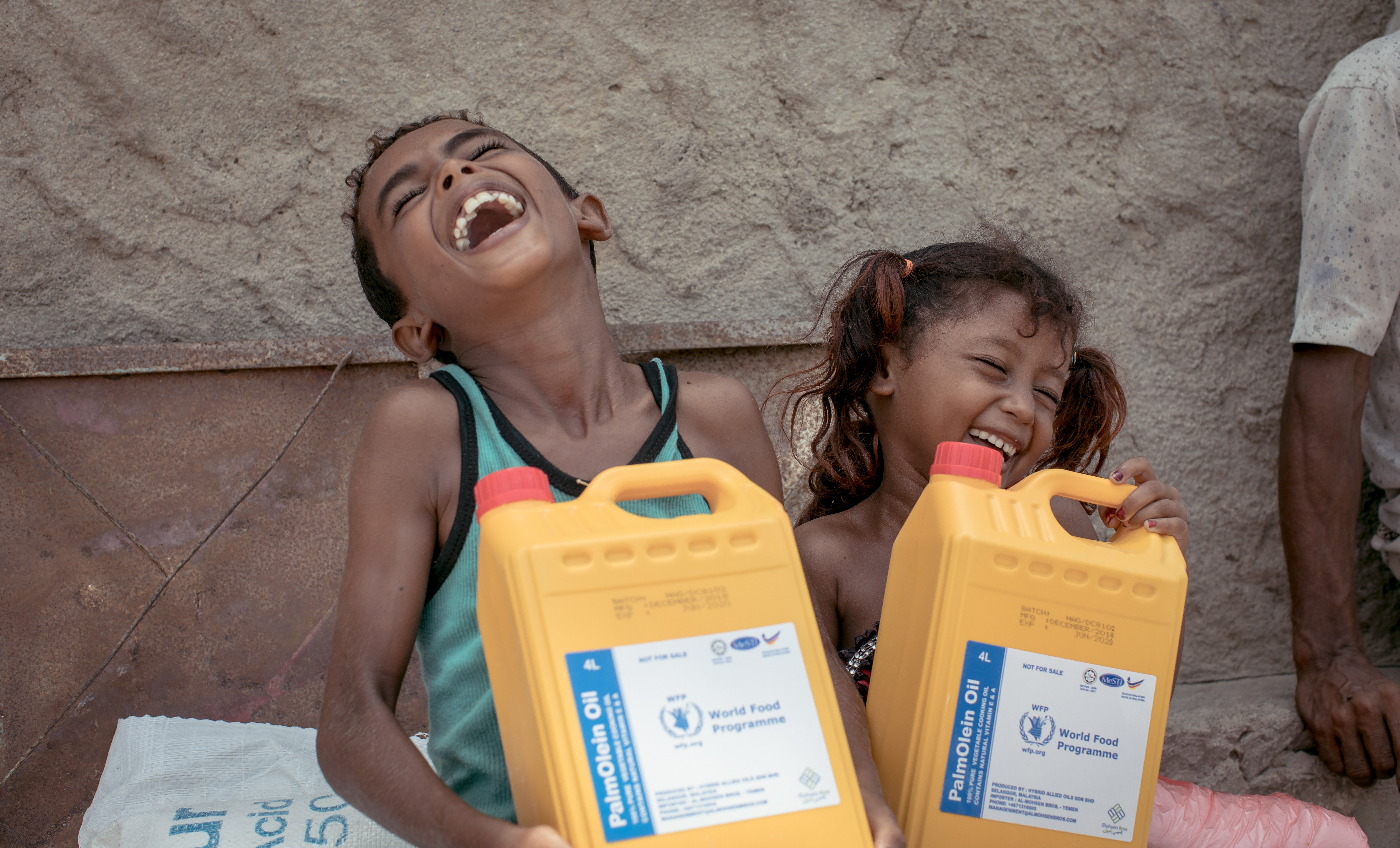 For that to happen, his country needs peace.

“Above anything else, we must stop this war,” Mohammed said. “Without peace, people are not able to work; they will keep going hungry and keep dying of violence, poverty and disease that is caused by this conflict.”

“And I want to say to Americans – we need your financial support, but we also need your help in advocating for peace in Yemen,” Mohammed continued. “Ask your leaders. Write, call, do what you can.”

“I know that Yemen can be a strong country; it’s my ultimate hope that Yemen becomes one day like the United States. But first let’s stop the war so we can rebuild. That is the only solution for Yemen to become the self-reliant, prosperous nation I know it can be.”