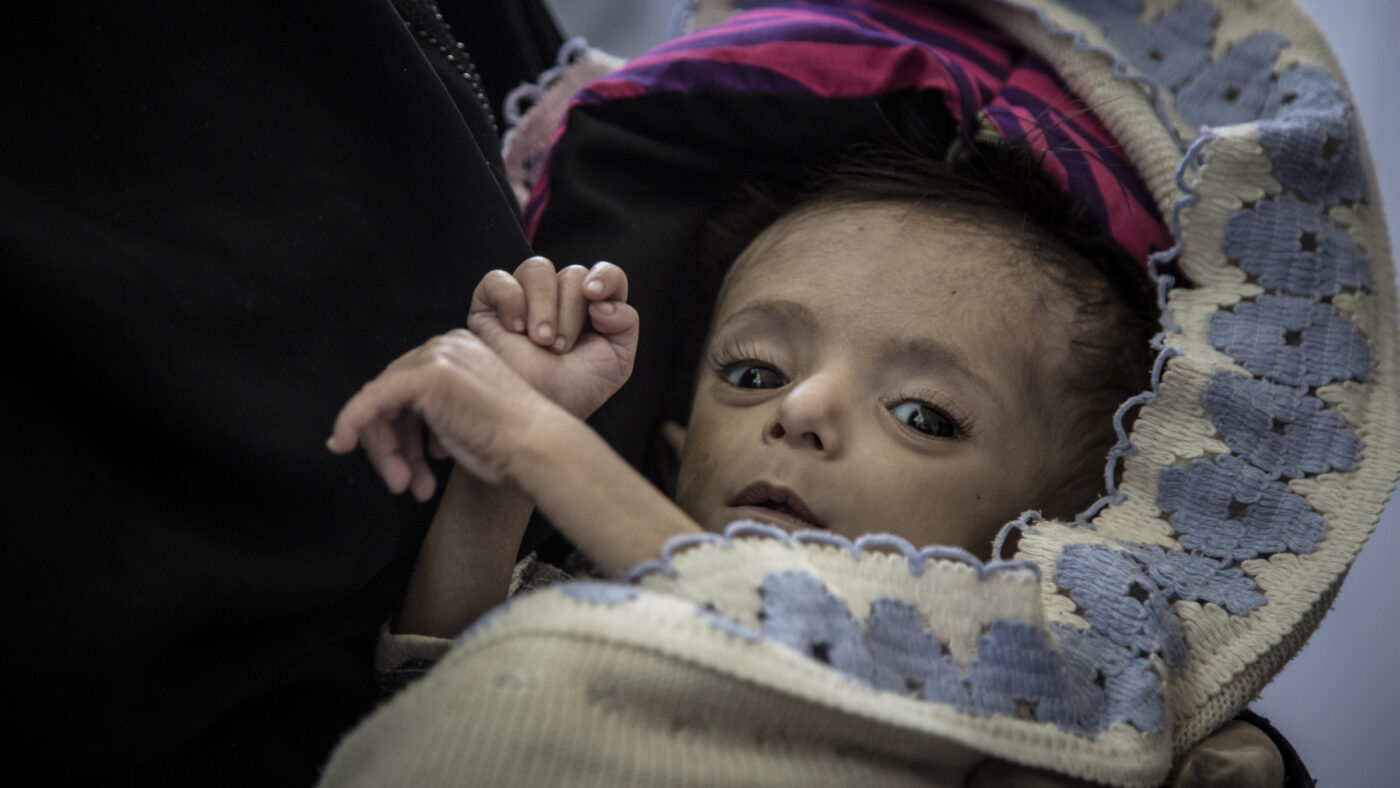 Nearly 16 million Yemenis don’t know where their next meal is coming from, and the situation continues to deteriorate. WFP is rapidly scaling up operations to assist 12 million of the most vulnerable.

Fleeing War: The Evolution of Hunger 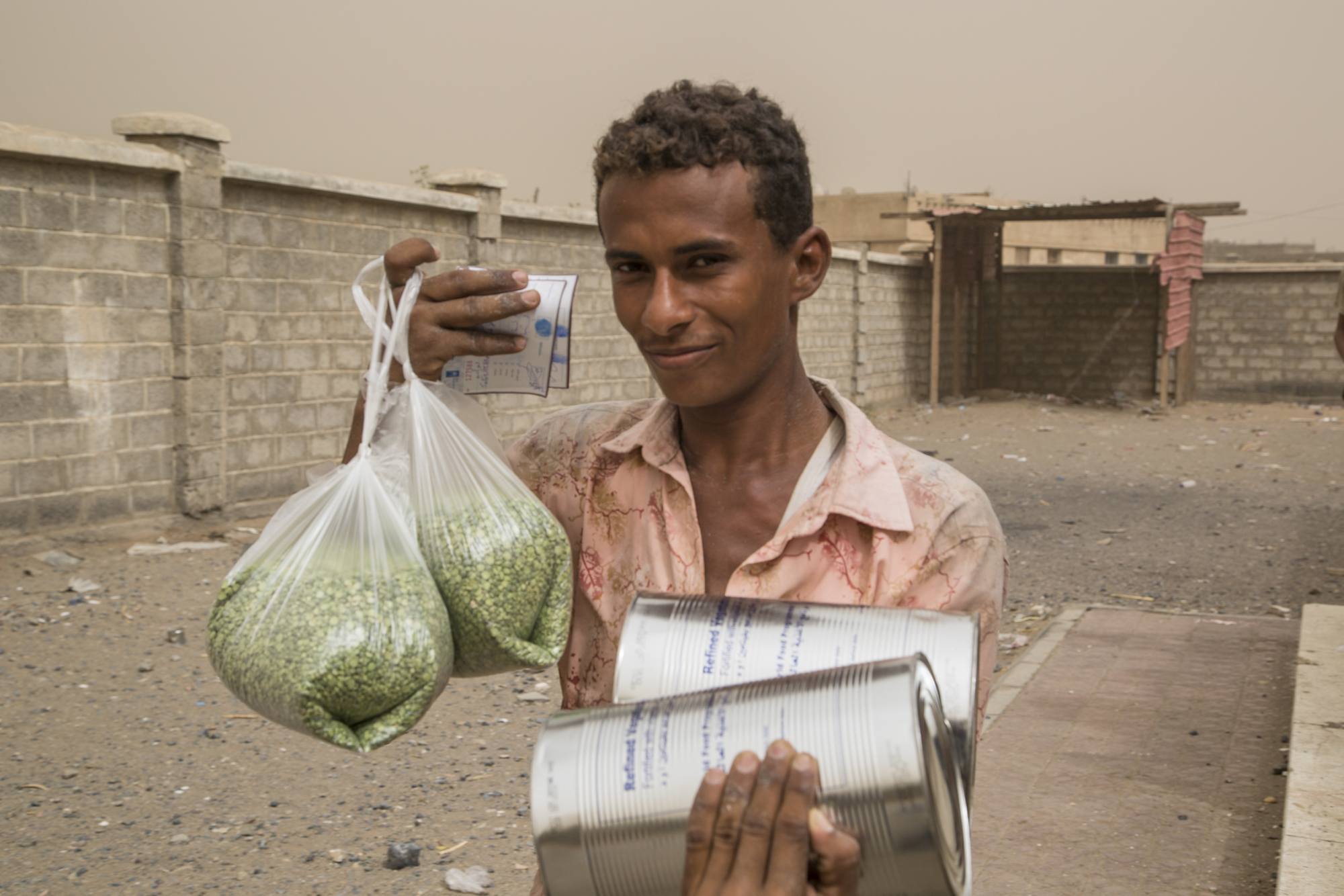 On June 3rd, WFP makes a breakthrough in rebel-held Nihm district for the first time since conflict began. By partnering with Islamic Relief, over 5,000 people receive a 2-month ration of life-saving aid. On June 20th, WFP is forced to suspend food distribution in Sana’a after negotiations stall on an agreement to prevent food diversion. Nutrition programs for malnourished children, pregnant and nursing mothers continue. 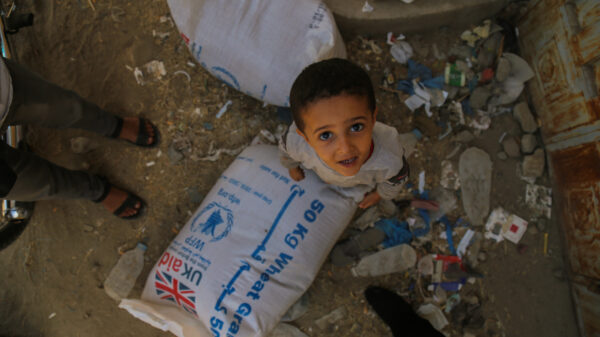 A WFP team visits the Red Sea Mills for the first time since September, when they were cut off due to heavy fighting. Days later, gunfire forces them away again. The silos contain enough grain to feed 3.7 million people for a month. Despite the obstruction, WFP continues to feed 10 million Yemenis every month. 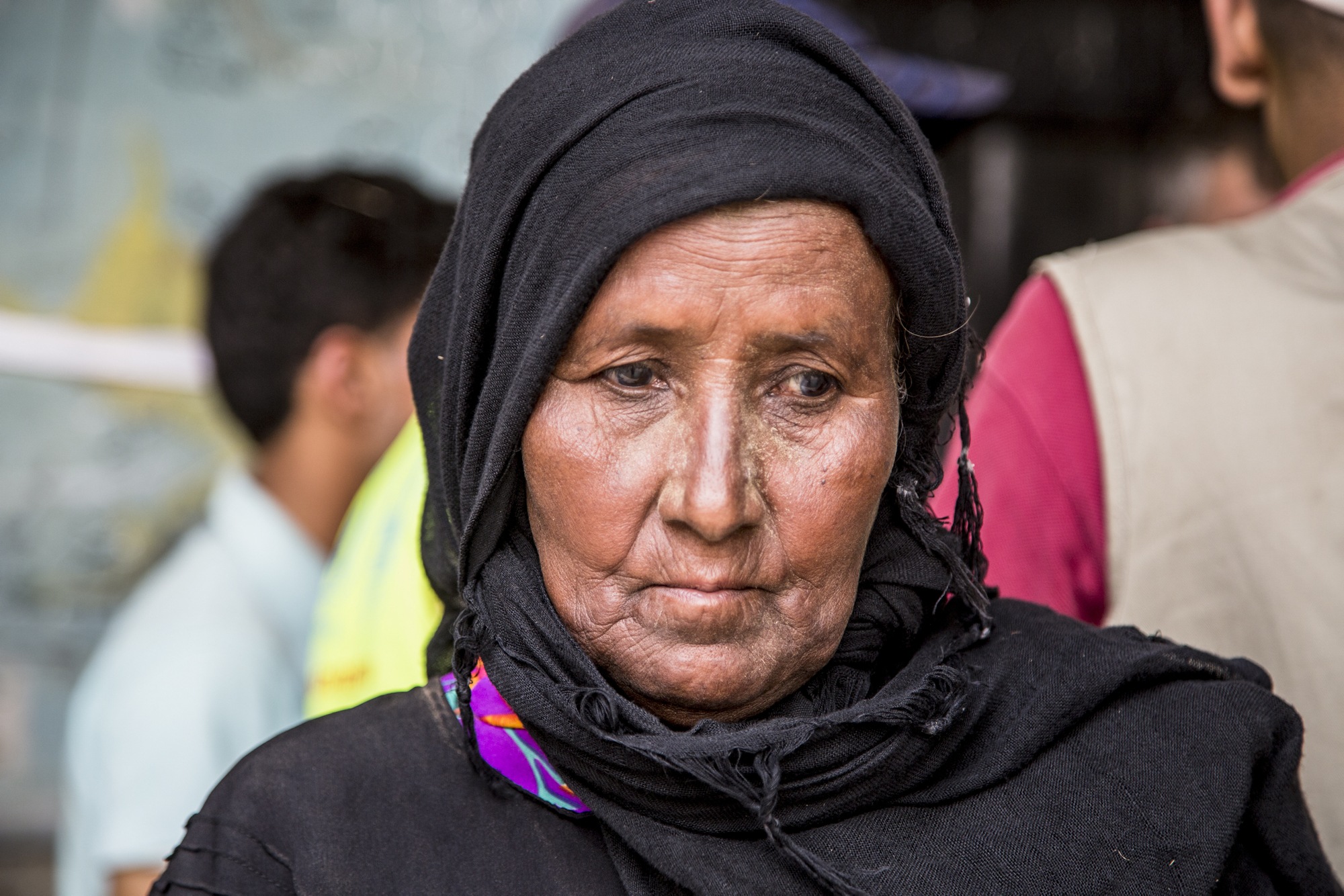 Renewed fighting erupts in the vital port of Hodeidah, threatening food deliveries and pushing millions to the brink of famine. 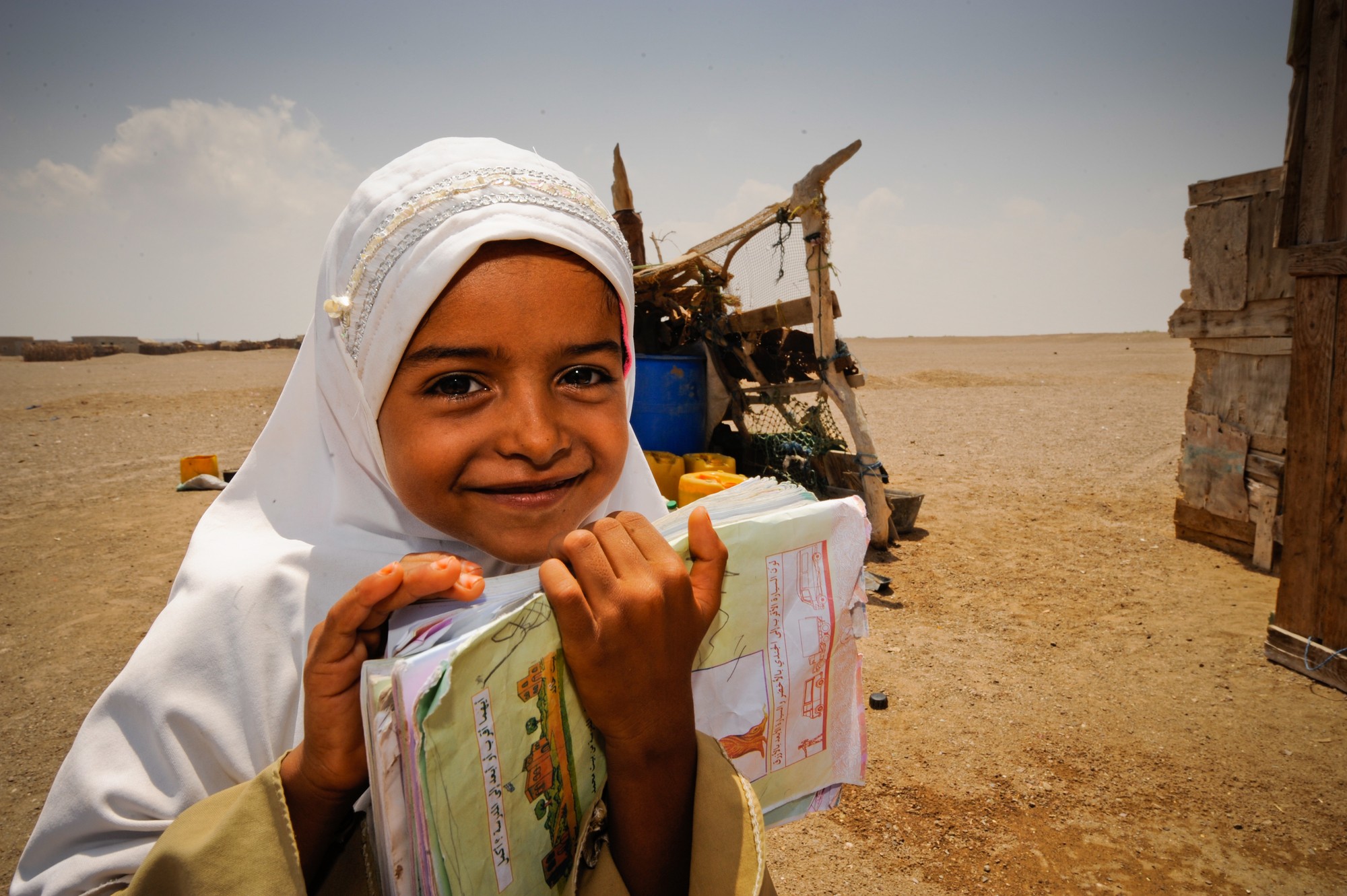 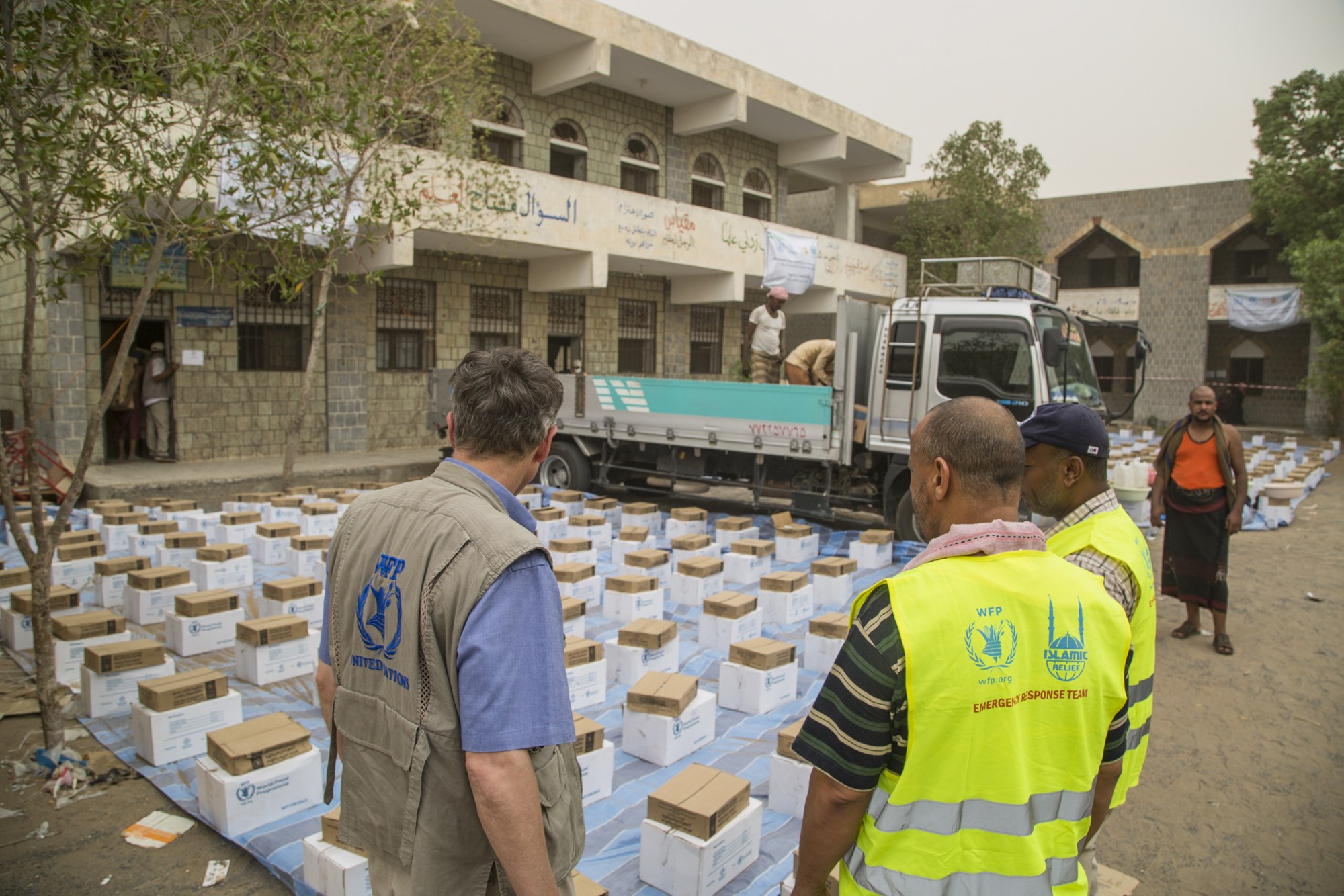 WFP makes plans to scale up its assistance to reach 8 million people every month who are severely hungry. 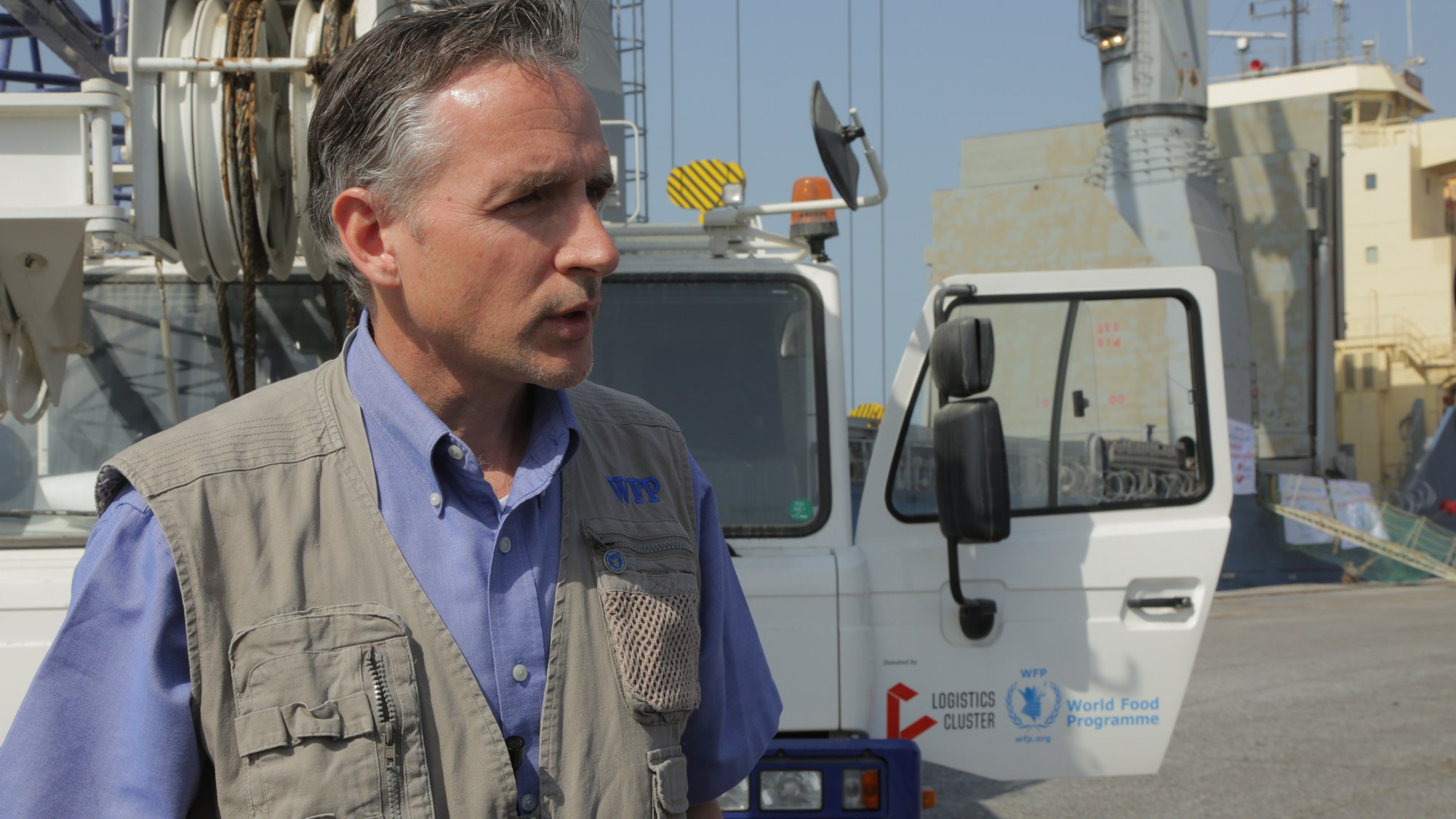 A military coalition of countries involved in the conflict starts a blockade of all of Yemen’s ports, further restricting vital supplies and food. 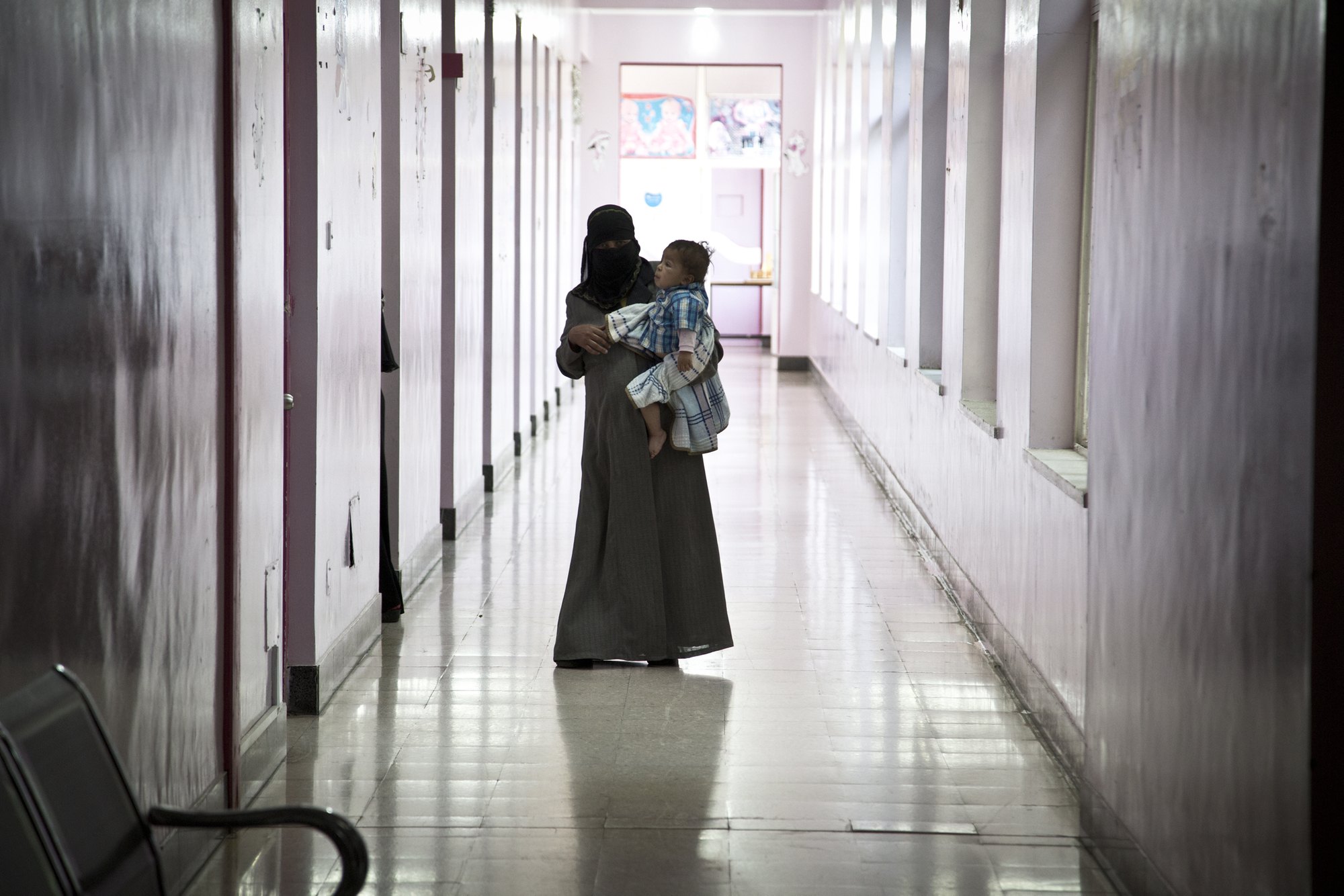 An outbreak of cholera begins, becoming the fastest-growing outbreak ever. 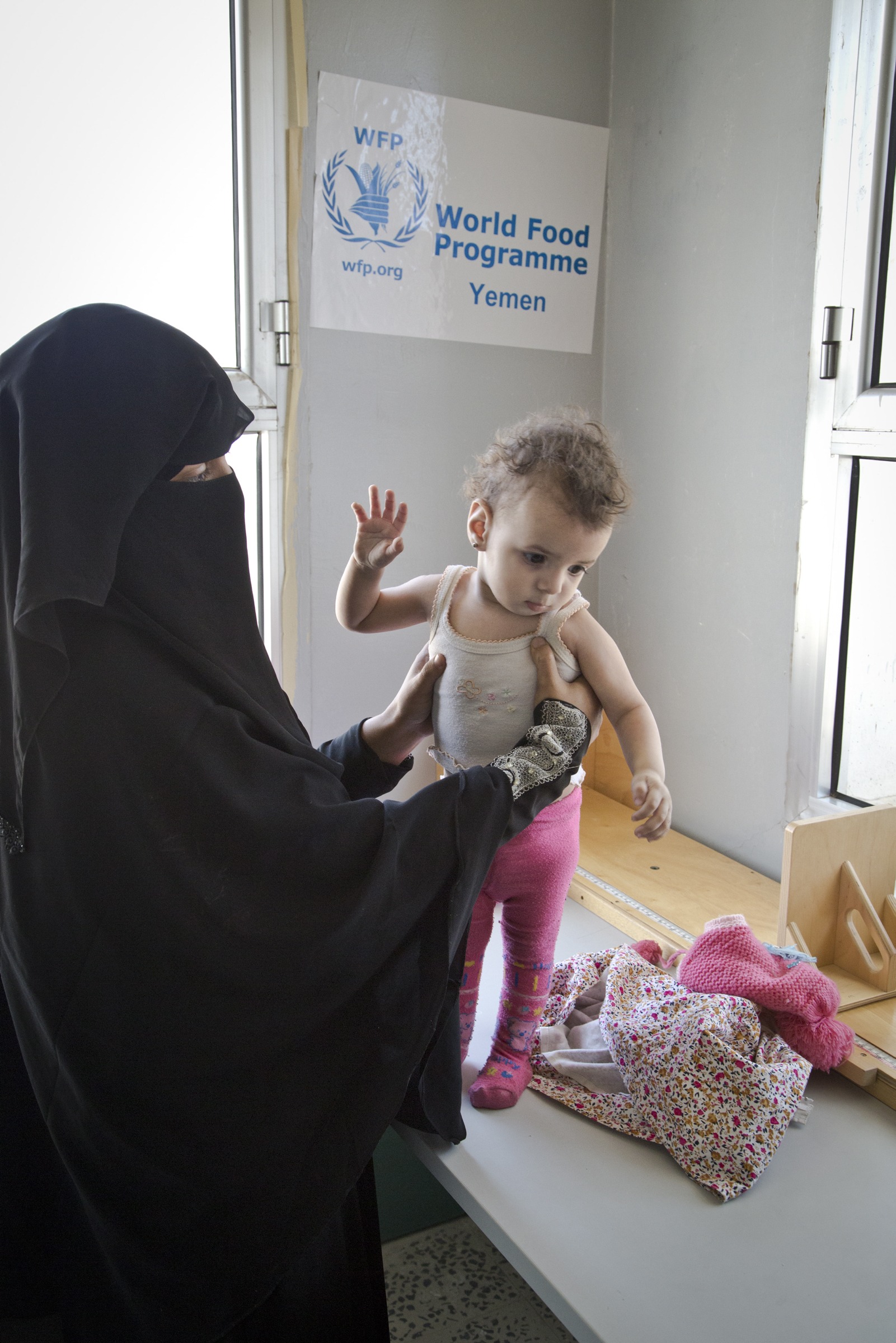 WFP says Yemen is in a "race against time" to prevent famine. 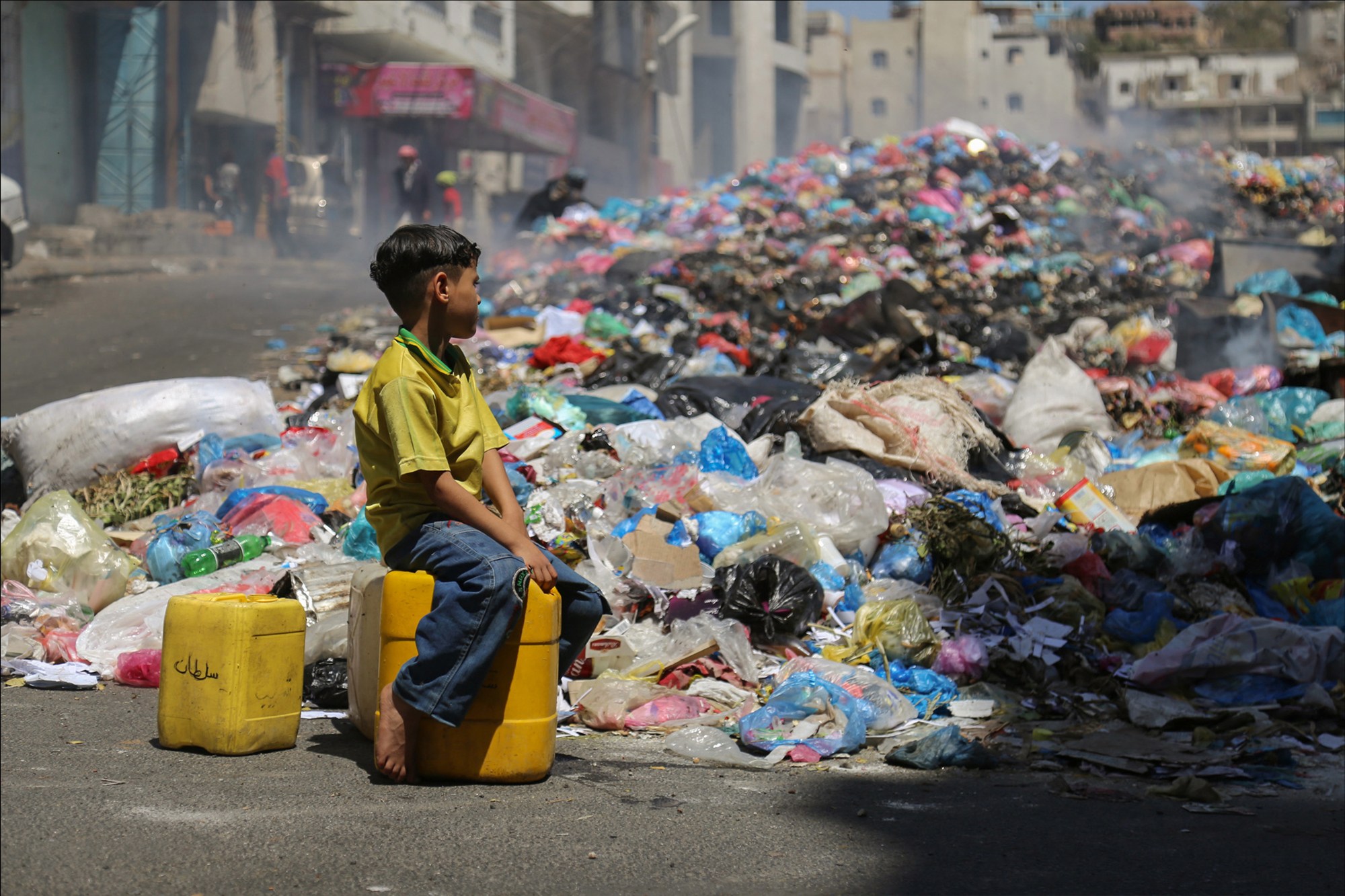 The civil war begins in Yemen, pitting the government against Houthi rebels. 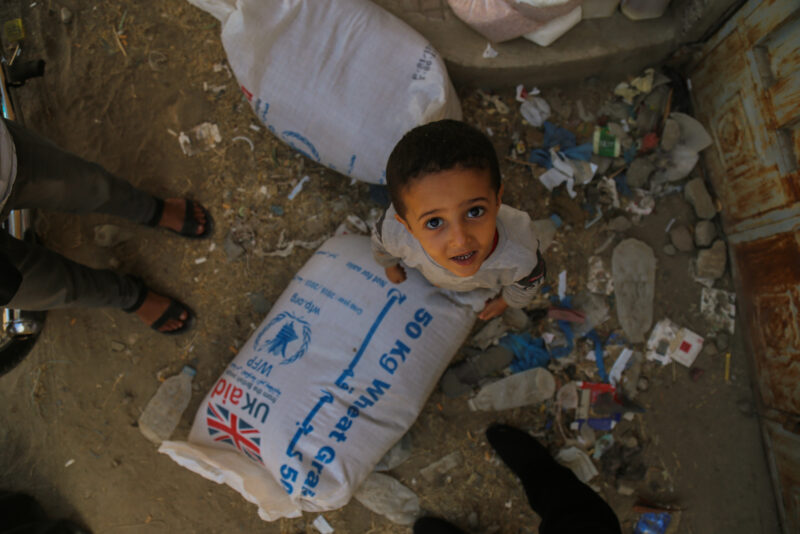 Despite WFP’s efforts, one child in Yemen dies every 10 minutes due to preventable causes. 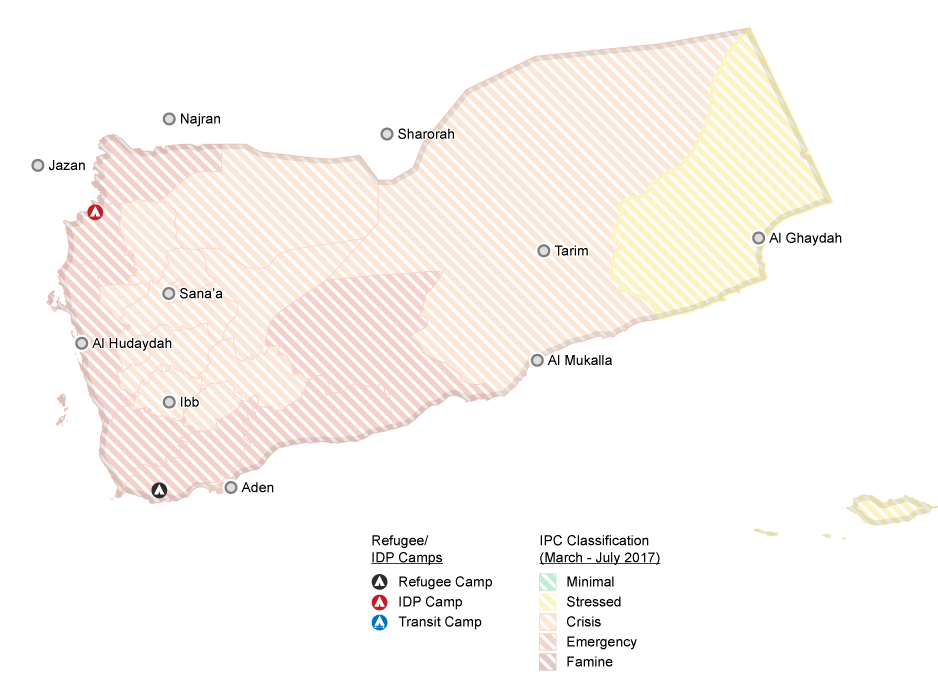 The World Food Programme is scaling up to feed as many as 12 million people in Yemen each month. 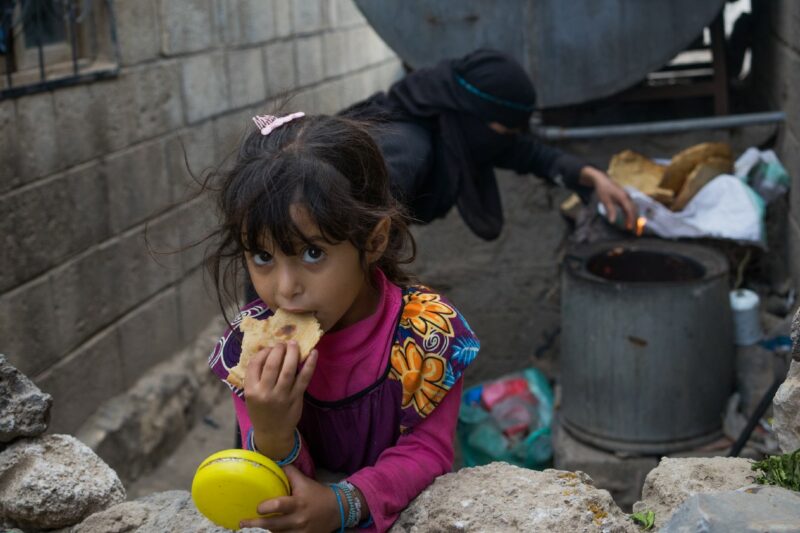 Domoaa means 'tears' in Arabic. "I cry every day for the pain and suffering we go through just to get food," her mother says.

Abdurrahman is 12 years old and hopes to become a doctor when he grows up. Thanks to WFP school meals, he goes to class every day despite his family’s dire situation. 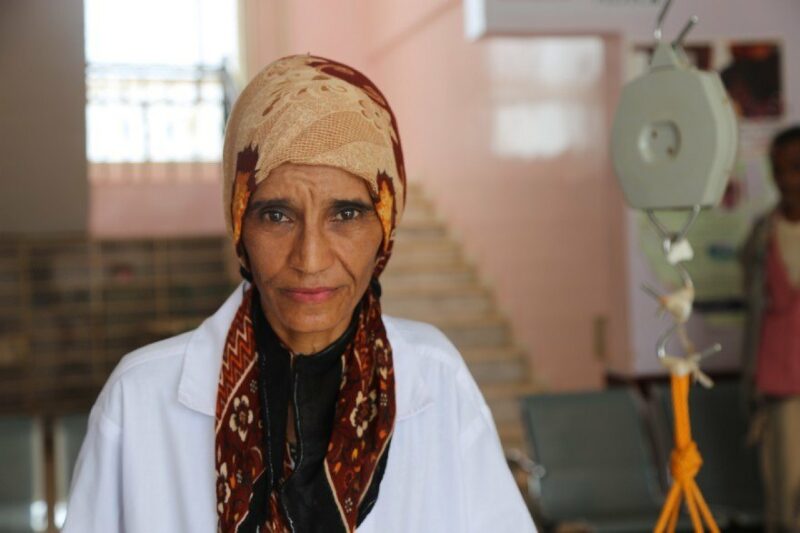 Maika Alaslemy is the head nurse at a health center in Yemen and works around the clock to save children from starvation. “Hunger doesn’t differentiate between children,” she says. “We work out of our obligation to save lives and preserve the future of Yemen.”

WFP is the only U.N. agency with its own shipping unit, delivering food assistance through the Red Sea and into strategic Yemeni ports. Dedicated staff negotiate shipping lines and navigate tricky routes to keep cargo safe. A single ship can carry 25,000 tons of wheat, enough to feed 2 million people for a month.

The number of ships WFP uses on any given day

Tons of food sent from Oregon to Yemen in Aug 2018

Mobile cranes boost the capacity of the Yemeni port of Hodeidah, which handles 70 percent of the country’s imports. This lifeline for families includes critically-needed food and humanitarian supplies. The cranes significantly increase the speed of unloading humanitarian cargo and other relief items.

Of all Yemen's food is imported

Amount of food each mobile crane can handle

When local markets are functioning and food is available, but unaffordable, food vouchers give Yemenis the power to purchase food on their own terms. They can be used at WFP food shops to buy fresh produce, fish and meat. E-cards work like debit cards, helping to stimulate the local economy and support local producers.

People able to buy their own groceries

In countries around the world and in Yemen, the mobile Vulnerability Analysis and Mapping (mVAM) unit equips families with mobile phones so they can share information with WFP about their needs. Families call a hotline and WFP uses the information it collects to better plan assistance and track changes in food prices.

Photo: WFP These Are the Fastest-Deteriorating Emergencies to Look Out For in 2020

A new report hammers home the need for billions of dollars in investment to keep hunger from deepening its tentacles further into vulnerable locations across the world.

Read more +
Photo: WFP/Abeer Etefa Children Are the Hidden Victims of Hunger and War. Here Are Some of Their Stories.

The world may be moving on to a new year, but in Yemen, millions are being left behind. Conflict has created a hunger crisis in the country.

Hunger is especially cruel to children. And it's a daily reality for millions of them – a scale that’s difficult for most of us to imagine.

are severely food insecure, and

is needed to continue operations each month
Photo: WFP/Fares Khoailed

Let’s build people’s knowledge, skills and resilience. Let’s invest in economic opportunities and sustainable food systems so that all Yemeni families can get the nutrition they need to reach their full potential.

Let’s create A world where every person is self-reliant. Help us reach our 2030 vision.
Donate
Solving Hunger . For Good.
Explore About Us WFP's Work U.S. Policy Blog Podcast
Get Involved Start a Fundraiser Be a ZeroHunger Hero SharetheMeal App Corporate Partnerships Foundations
It looks like you're outside of the United States.