Celebrating Ramadan in Yemen: “the Graveyard for the Living”

Ramadan in Yemen is harder than it has ever been.

As the conflict drags on, more than 20 million people won’t be enjoying festive meals or Ramadan favorites . In fact, they’ll hardly have enough food to survive. That makes it all the more important for the United Nations World Food Programme (WFP) ,  the largest humanitarian agency operating in the country,  to secure funding and unrestricted country-wide access to reach all Yemenis in need. Each month, we cover the most basic food needs of more than 10 million people .

Read on for seven stories of women facing unbearable hardship, but carrying on, during the holiest month of the year.

“We fast every day of the year now.” 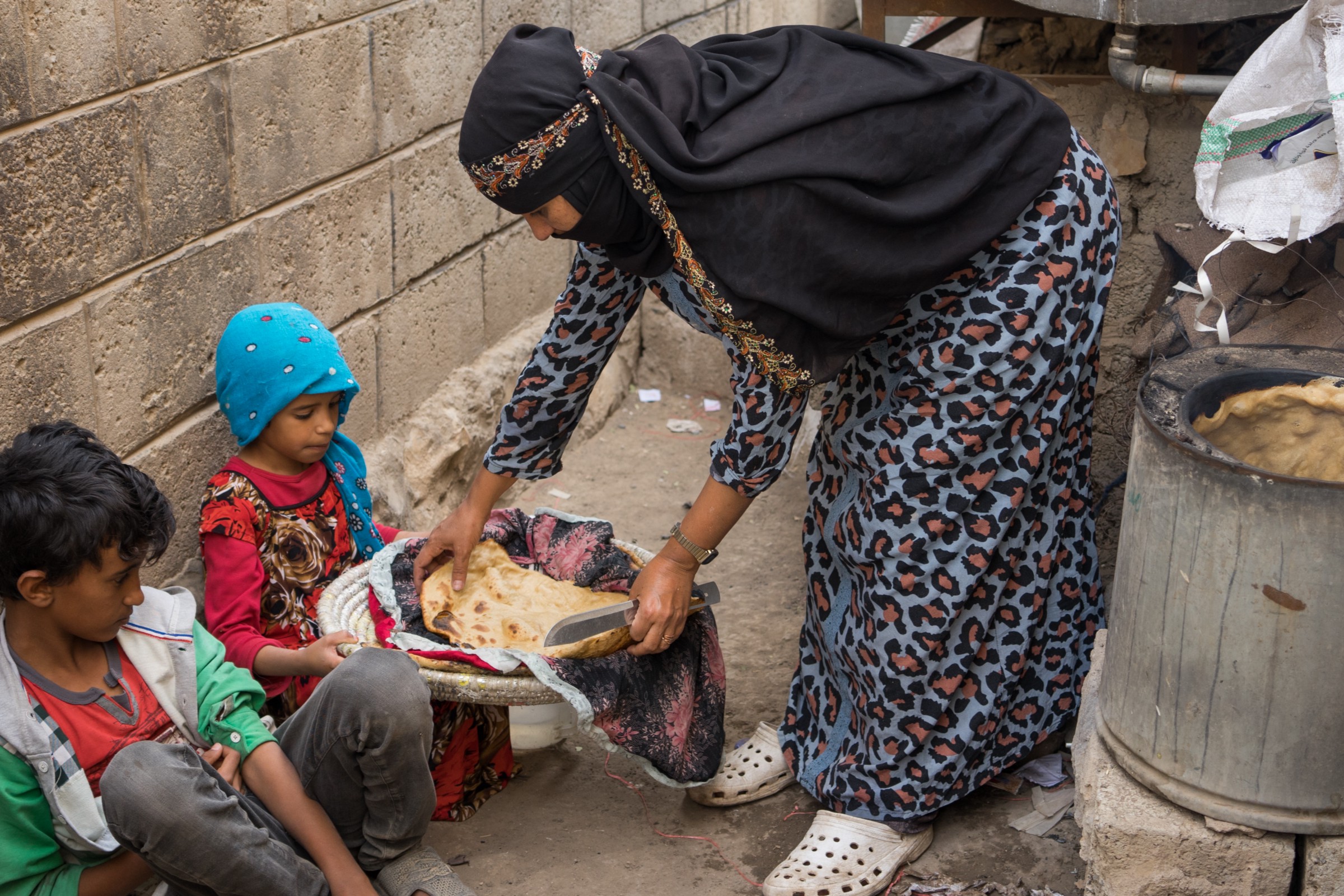 Afrah spends three hours making two pieces of bread for her children. No fuel and only some flour is all they have.

Afrah’s name means joy, but the holy month of Ramadan has been a struggle for this mother-of-four.

“Ramadan was better before the war. Iftar consisted of rice, chicken and yogurt, now my children eat only bread and water,” says Afrah Hassan, 34.

Before Ramadan began, Afrah collected as much rubbish as she could from the streets — plastic, paper, scrap wood, twigs. This is the fuel she uses in her little makeshift oven to bake bread. Afrah’s family hasn’t had cooking gas for more than six months. It takes two hours for the oven to heat, so she needs a big supply of materials to burn. She knows that burning plastic is bad for her and her children’s health, but she doesn’t have a choice.

“Today is the first day of Ramadan, I have only a little flour and one egg to feed my family. I will prepare the bread for my children and boil the egg. I will cut the bread and egg into small pieces. That’s the only meal we have,” Afrah says.

There are severe shortages of cooking gas in the local market and what is available is very expensive; nearly double what it cost before the conflict. The food she receives from WFP she says she often shares with other women, like her neighbor Hossn.

“We fast every day of the year now. There is no difference between the month of Ramadan and other months,” she adds. “In Yemen we can no longer feel any occasions; nothing really feels like what it used to, not Ramadan, not Eid.” 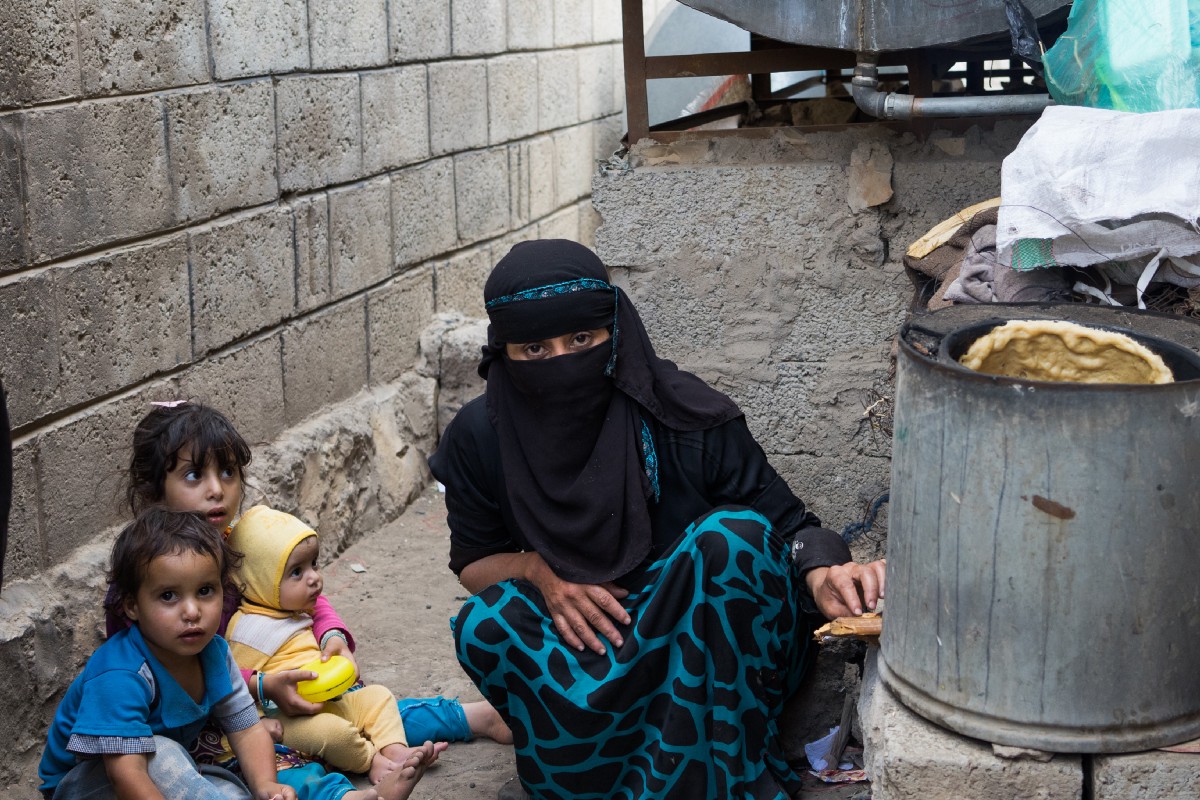 Hossn with her three girls. 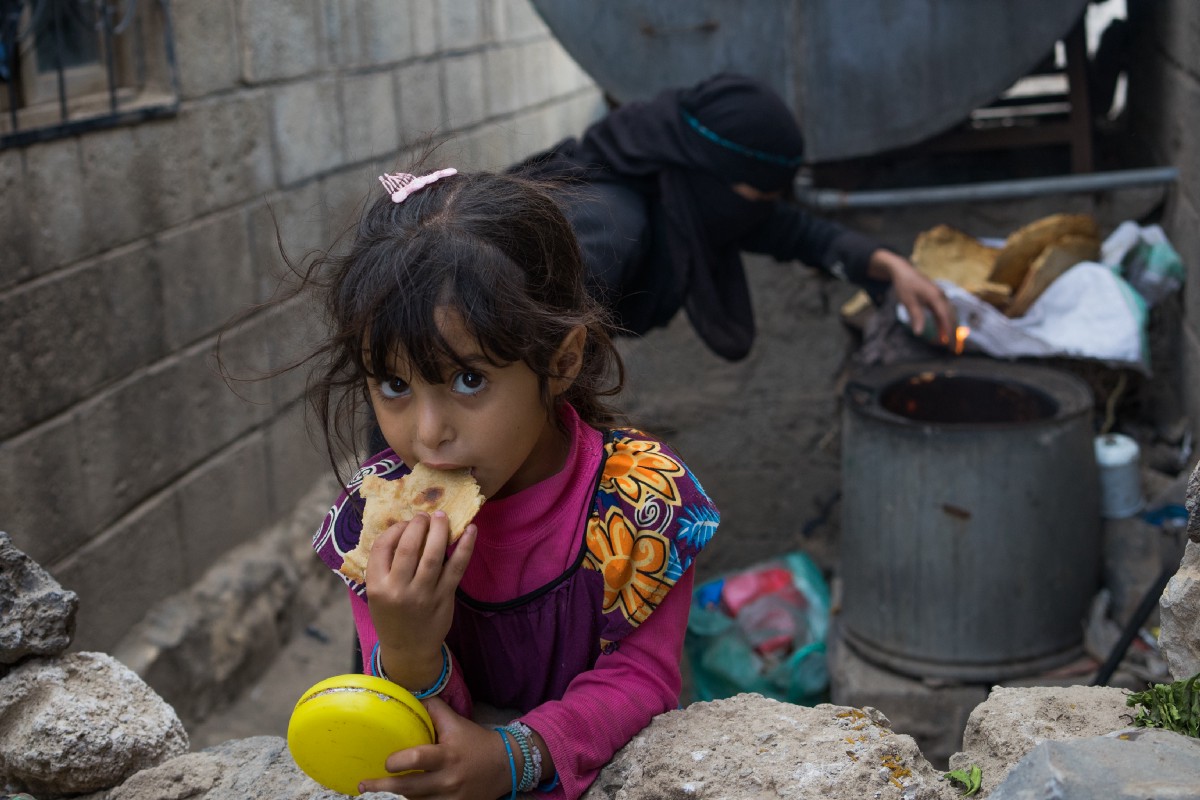 Their names are inspired by war and hardship: Domoaa, Thekrayat and Salwa (Arabic for: tears, memories and solace).

Hossn Mohammed Albaseer, 24, is worried about Eid al Fitr coming. Eid al Fitr is meant to be a moment of great celebration, marking the end of the fasting month and a time for families to come together to share a meal and exchange gifts. Many people buy new clothes for Eid.

“I don’t want Eid to come,” says mother-of-three Hossn. “My heart breaks when my children see other children with new clothes for Eid but I can’t afford to buy them anything.

“All I can think of is where I will get flour for bread and wood to set the fire.

“Every day, my children and I search for flour from nearby houses,” Hossn explained, she then goes to her neighbor Afrah to use her oven to bake bread.

Hossn is poorly nourished and has struggled to breastfeed her youngest daughter, Thekrayat, who is just 5 months old. Hossn should be receiving special nutrition support from the U.N. World Food Programme, but she says she struggles to travel to the health centres.

Thekrayat means memories in Arabic. Hossn worries about the memories that her children will grow up with. Her eldest child, Domoaa, was born just before the war reached Sana’a. Domoaa means tears.

“I called my daughter Domoaa, because I cry every day due to pain and suffering of getting enough food for my family,” says Hossn.

“War came and destroyed all hope in my heart and broke all my dreams.” 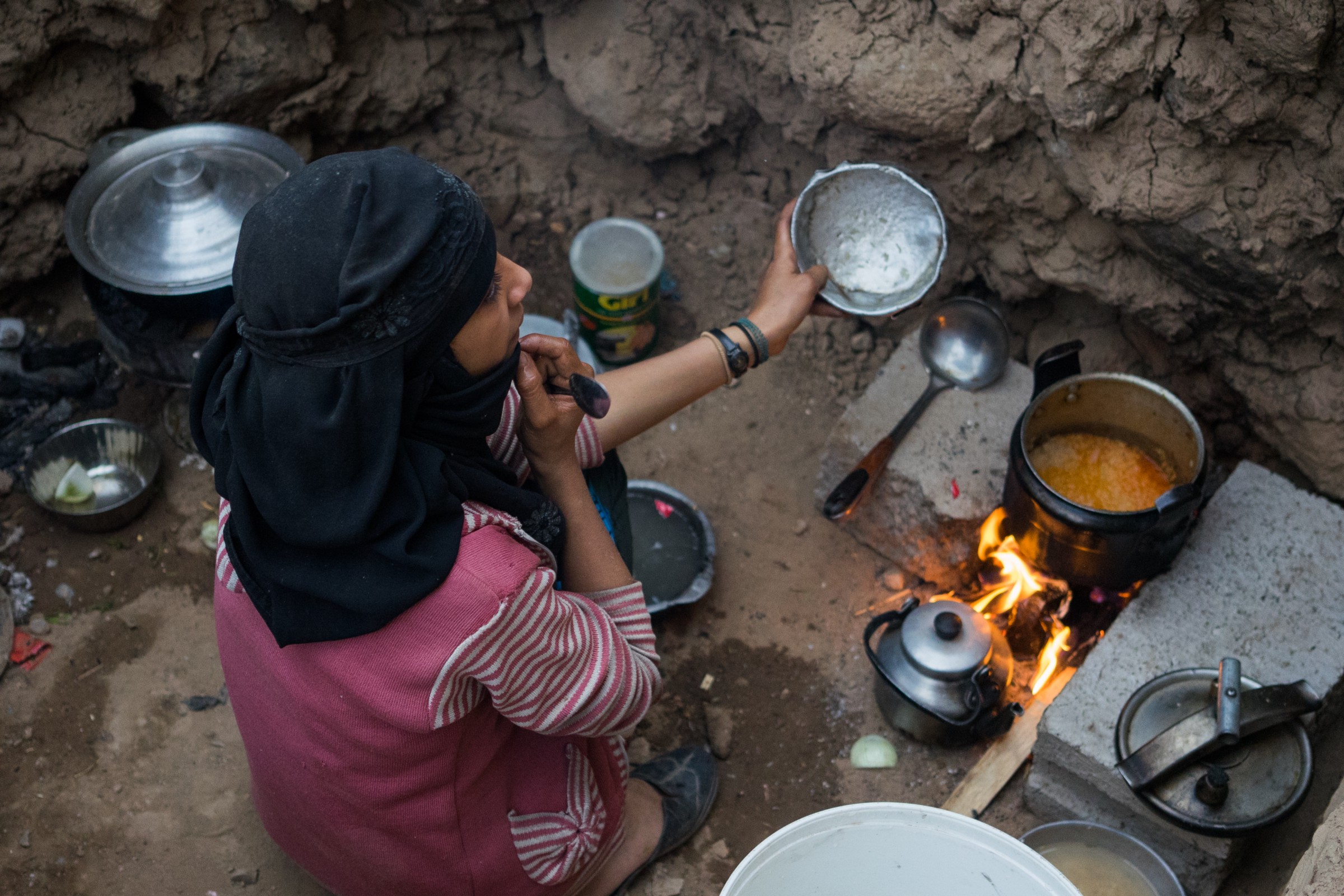 Paper, plastic and whatever she could find on the streets are the only fuel Diana could have. She has to make a choice between making her family a hot drink or some rice to quiet those hunger pangs for a little longer.

For Diana Abduljalil Doboan, at 23 years old, Iftar — the meal that marks the end of the day’s fast during Ramadan — means a difficult choice.

“This fire will not be enough for both rice and coffee. I want to drink coffee, but making rice is more important because it makes us feel full. These are the choices we make now,” said the 23-year-old.

Diana is only able to make a meagre fire from the rubbish she collects in the streets.

Married when she was just 12 years old, Diana has two children aged two and one. She says she used to dream of an education and a very different life.

“War came and destroyed all hope in my heart and broke all my dreams,” she says. “I know that Yemen is the graveyard for the living.”

“The two most terrible things in my life over the last four years are the hunger and the sounds of the explosions.” 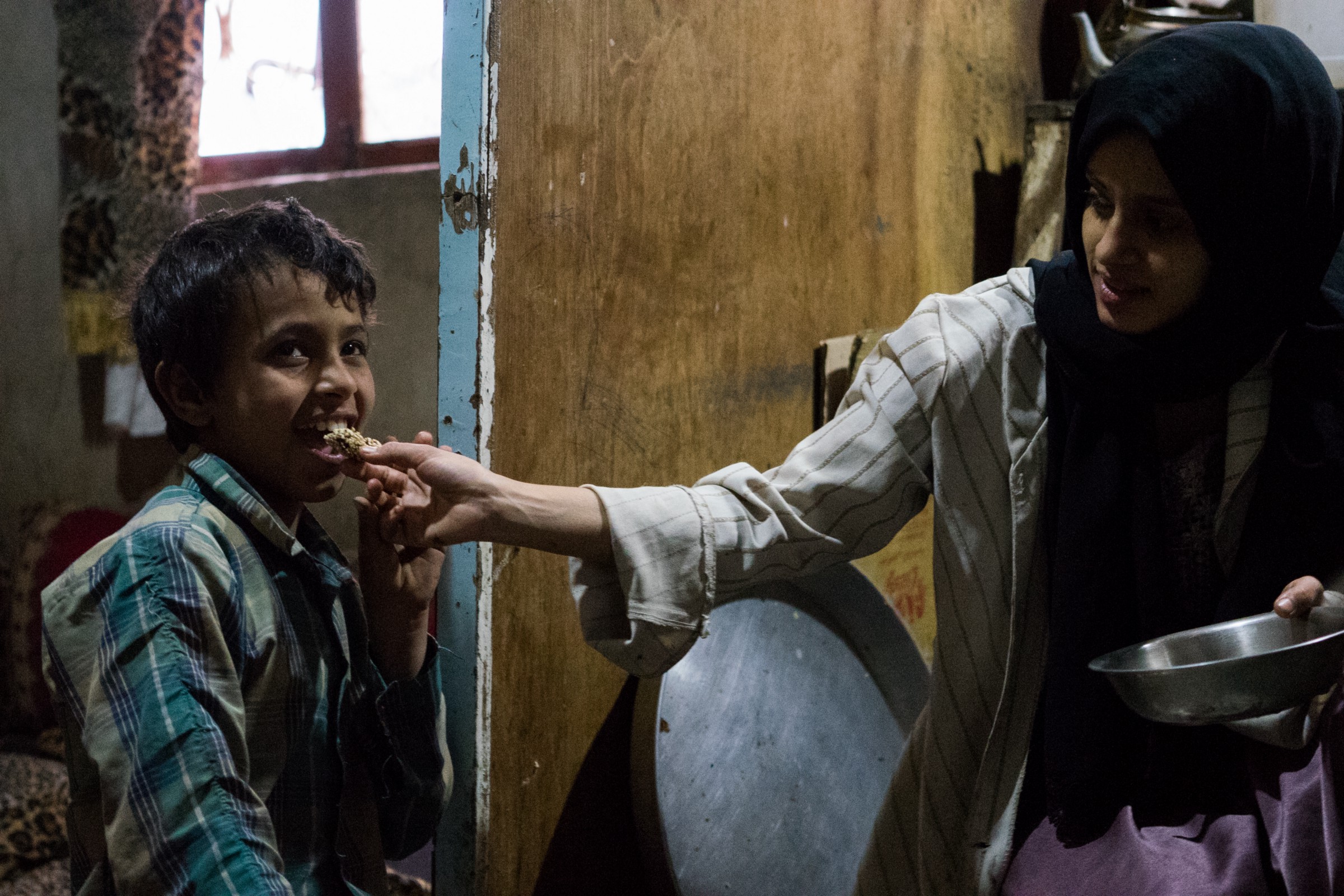 Hanan, 17, was forced to leave school when her parents could not afford sending her anymore.

Hanan was just 13 when the war began – now she’s 17. Her home was destroyed by the first airstrikes to hit Sana’a on 26 March 2015. Her family of six have lived in a single rented room ever since.

“The two most terrible things in my life over the last four years are the hunger and the sounds of the explosions,” says Hanan.

She was forced to leave school two years ago because her family could no longer afford the fees. Now she is responsible for cooking all the meals for her family.

“Before, my country was better, there was no war, no missiles, no fear, and prices were cheaper,” she says. 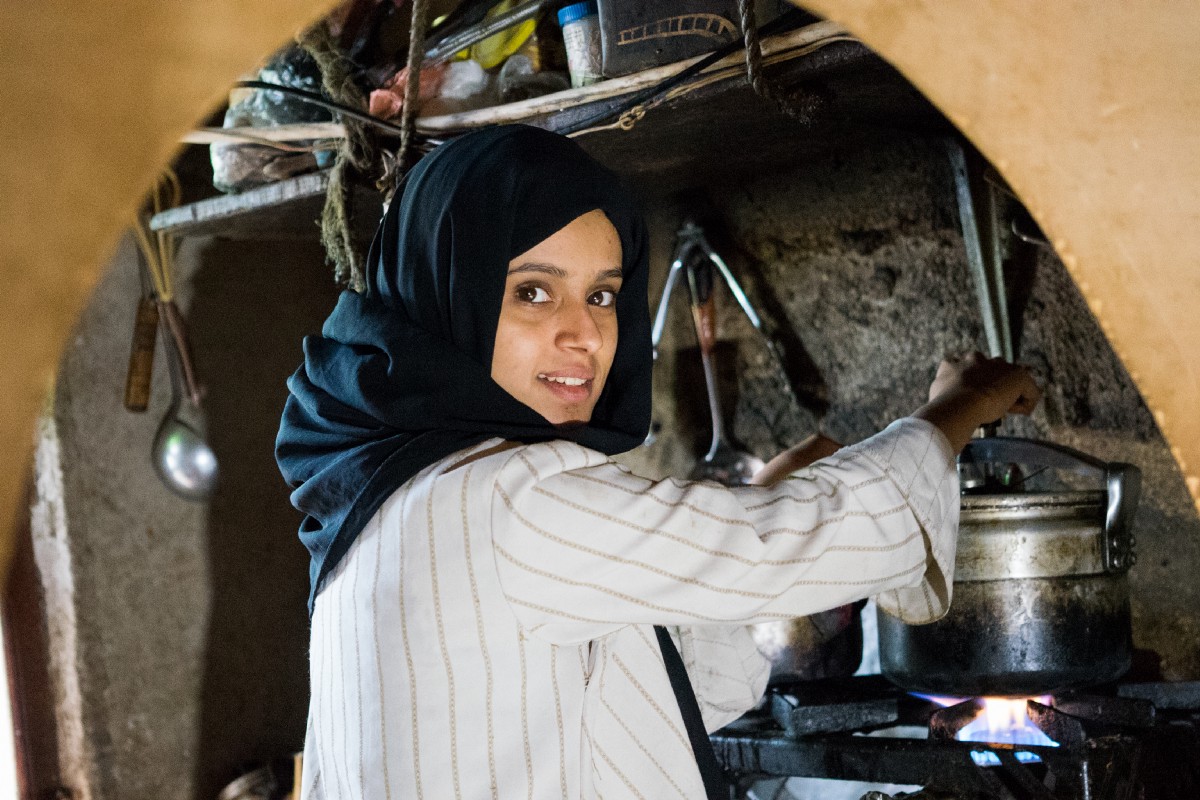 Hanan’s home was destroyed. Her family of six have since rented a single room.

“I wish that Ramadan had come at a time we had lots of flour, rice and gas. But Ramadan came while the war is still going on and the hunger continues.

For me all I wish as a Yemeni girl is that I can live in peace. That we get the cooking gas back to my country. That the war ends. That the fear leaves our country and we live in peace.”

“There is not much food and it is difficult to divide it.” 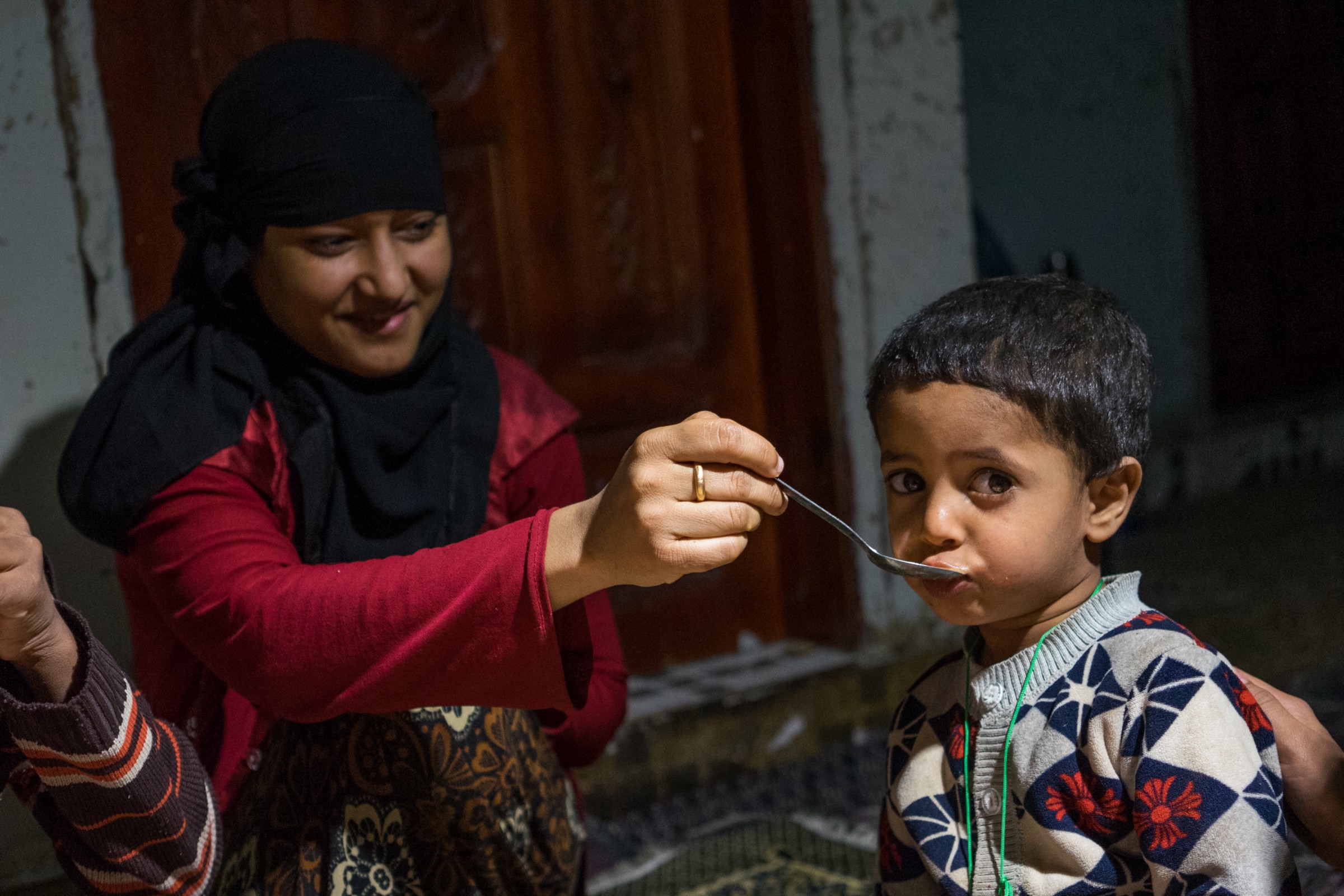 When the war hit Yemen, the fragile economy quickly deteriorated leaving millions unemployed. Ebtisam’s father left Yemen for Saudi Arabia to find work. Her mother is unwell and mostly bedridden. This leaves 18-year-old to look after her five siblings.

“I have been prevented from completing school. I only know how to read a little,” said Ebtisam. “When the war started, I stopped studying in school and now I work the whole day collecting firewood to set the fire, cooking food, and feeding my younger siblings.”

The family lives in northern Sana’a, near the international airport, an area that has been repeatedly hit by airstrikes. Their home has been damaged by the regular bombardments, but they continue to live there because they have nowhere else to go.

“Ramadan is such a difficult time for me because I have to take responsibility for all my siblings. There is not much food and it is difficult to divide it,” she says.

“I have become someone else.” 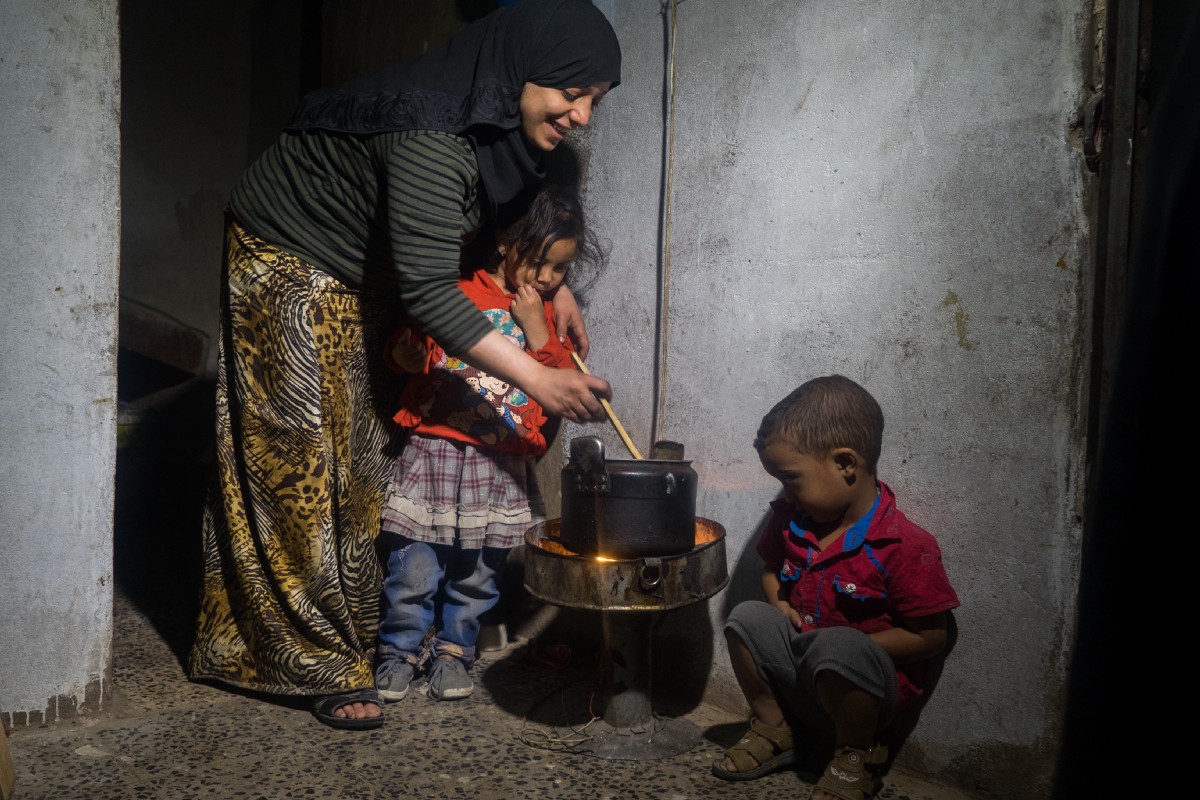 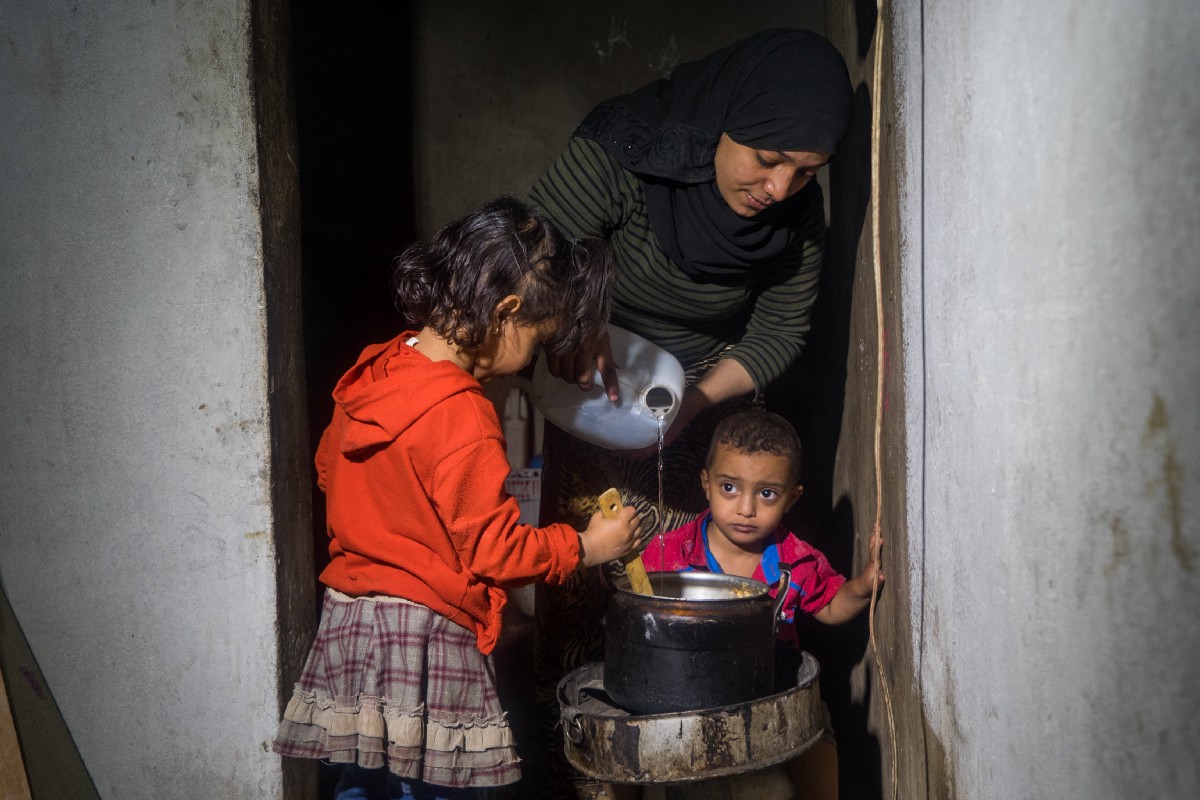 The ever-changing frontlines in Yemen’s brutal war have forced Kholod and her family to flee four times. Originally from Taiz, the 24-year-old mother-of-two now lives in Sana’a, where the U.N. World Food Programme supports a large population of internally displaced people.

“This is where I ended up in my life. I have been to many places. I have worked. I used to be someone in life! But now my life is just a daily struggle to feed my children,” said Kholod. 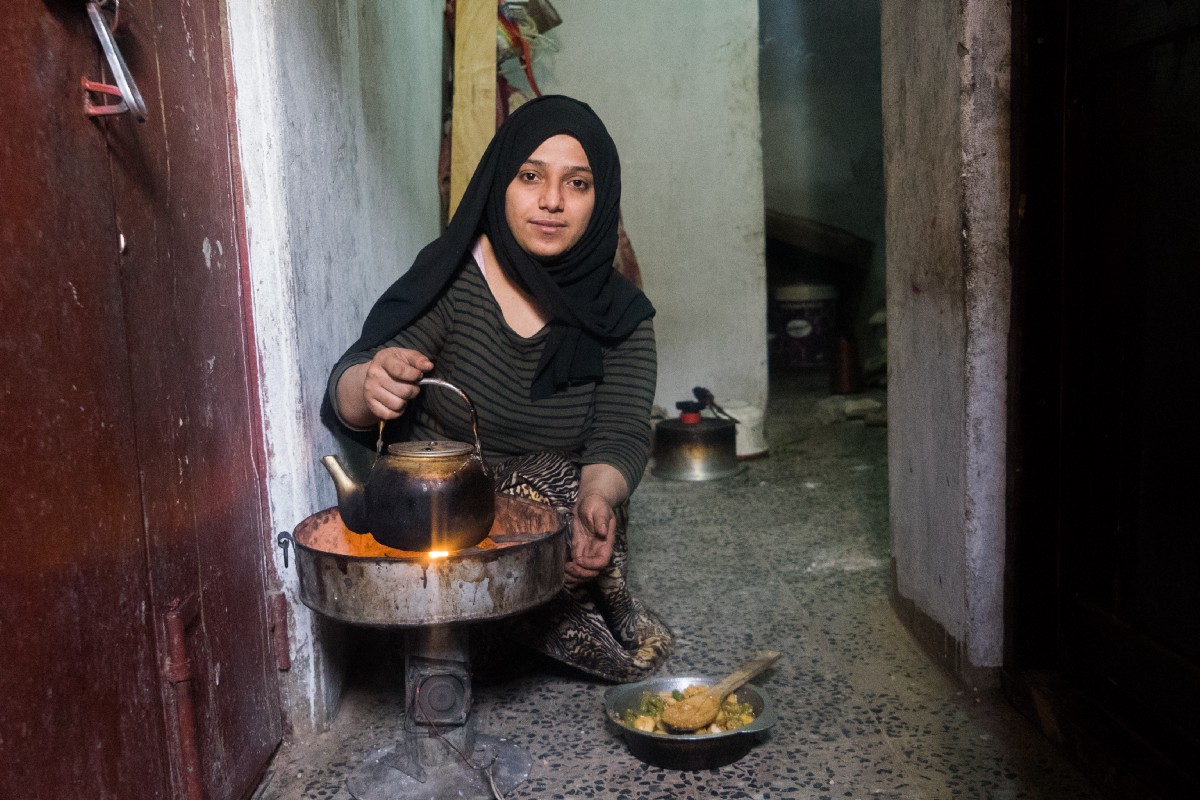 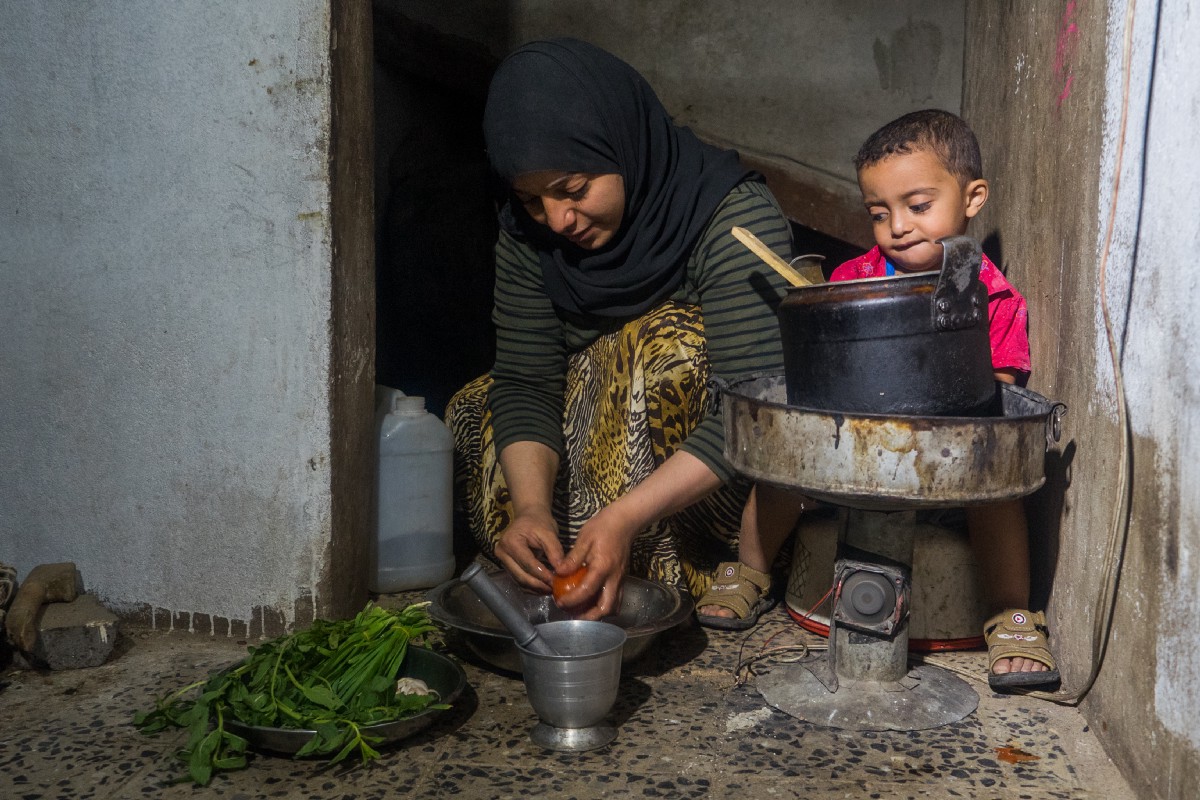 Before the war, Kholod worked as an assistant to a surgeon in the local hospital. She dreamed of a career, a happy home and a healthy family.

“I no longer feel like I am the person I used to be before the crisis hit my country. I have become someone else.”

But the war has not got the better of Kholod, yet.

“I have never imagined I would end up living in these hard circumstances. But this hard situation will not destroy me. I try as much as possible to fight it and to live each day. And finally, I will win!”

Kholod created an ingenious new type of stove that uses much less fuel than the traditional wood burning stoves. She helped other women in her neighborhood adopt her clever design.

“During Ramadan last year we at least had flour and lentils. But this Ramadan has been extremely difficult. There is no cooking gas, no water, and prices are very high.”

“Finally, I believe after a dark night, a beautiful dawn will surely come. It is my dream and the dream of many people.”

“I feel guilty because I will have a child born into this prison.” 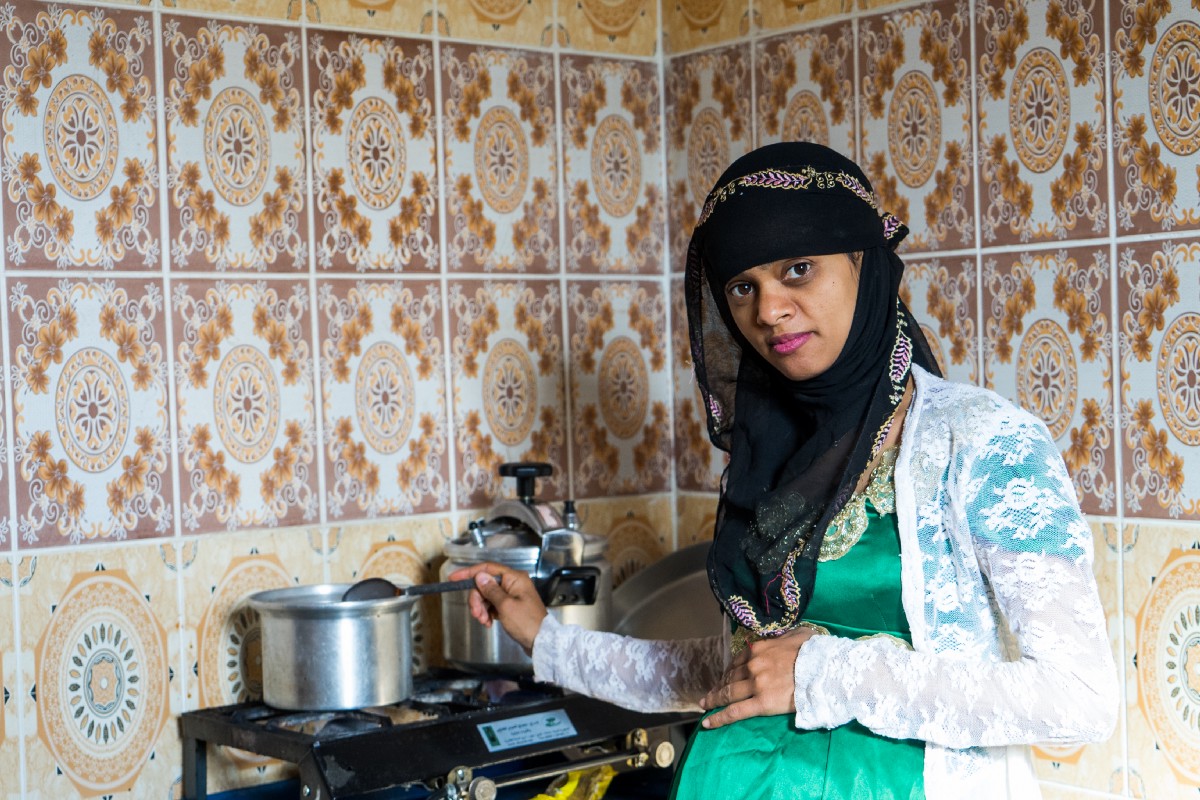 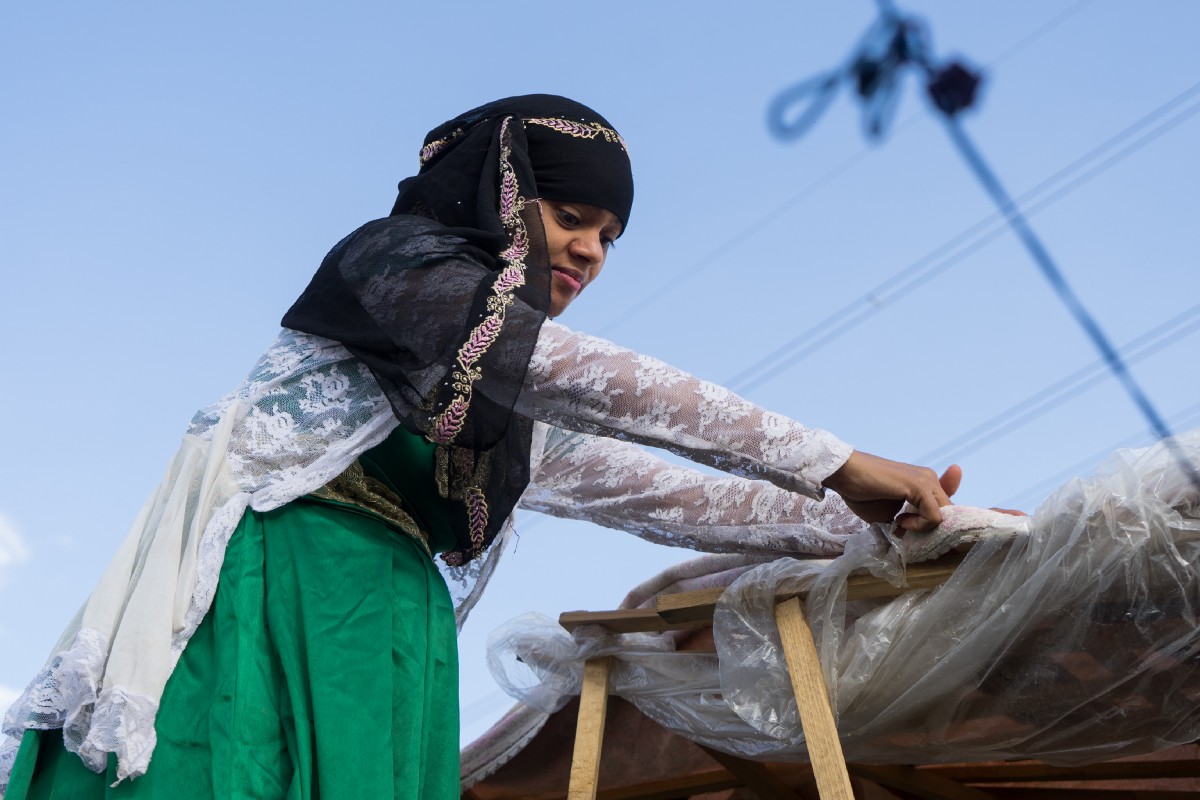 Ramadan has been difficult for Sultana, who at 28 is eight months pregnant with her first child. The young mother-to-be lives in Bani Hashish, about an hour from the capital Sana’a.

“I went to university. I had great hope that after graduating from university I would be employed in a public school and teach the children of Yemen. Three years have passed, and I have not been employed till now,” she says.

Sultana got married just nine months ago. She was worried that her husband, Haitham, would be forced to fight in the conflict, so he left Yemen and travelled to Saudi Arabia in the hope of finding work. They had been just married five months. She was already four months pregnant.

“I walk for many hours in the sun looking for health centers that distribute food for pregnant women,” said Sultana referring to the Super Cereal that the U.N. World Food Programme provides to mothers-to-be. 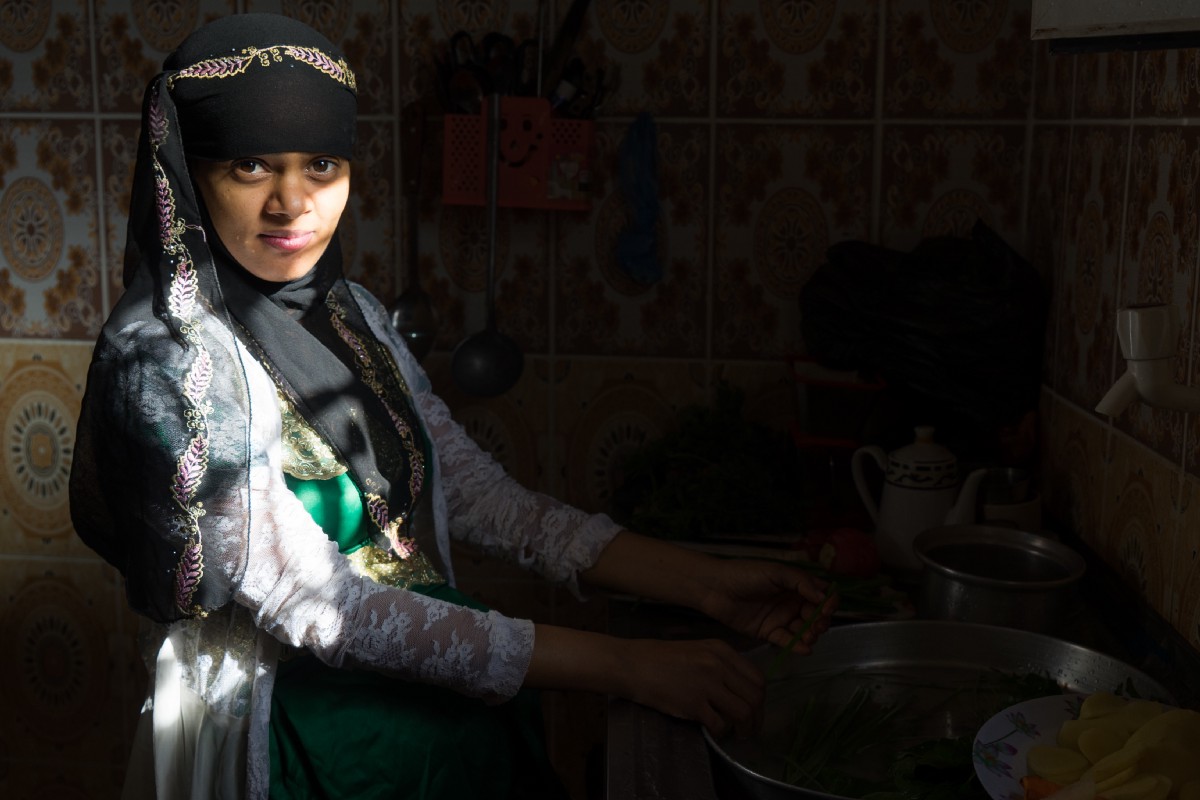 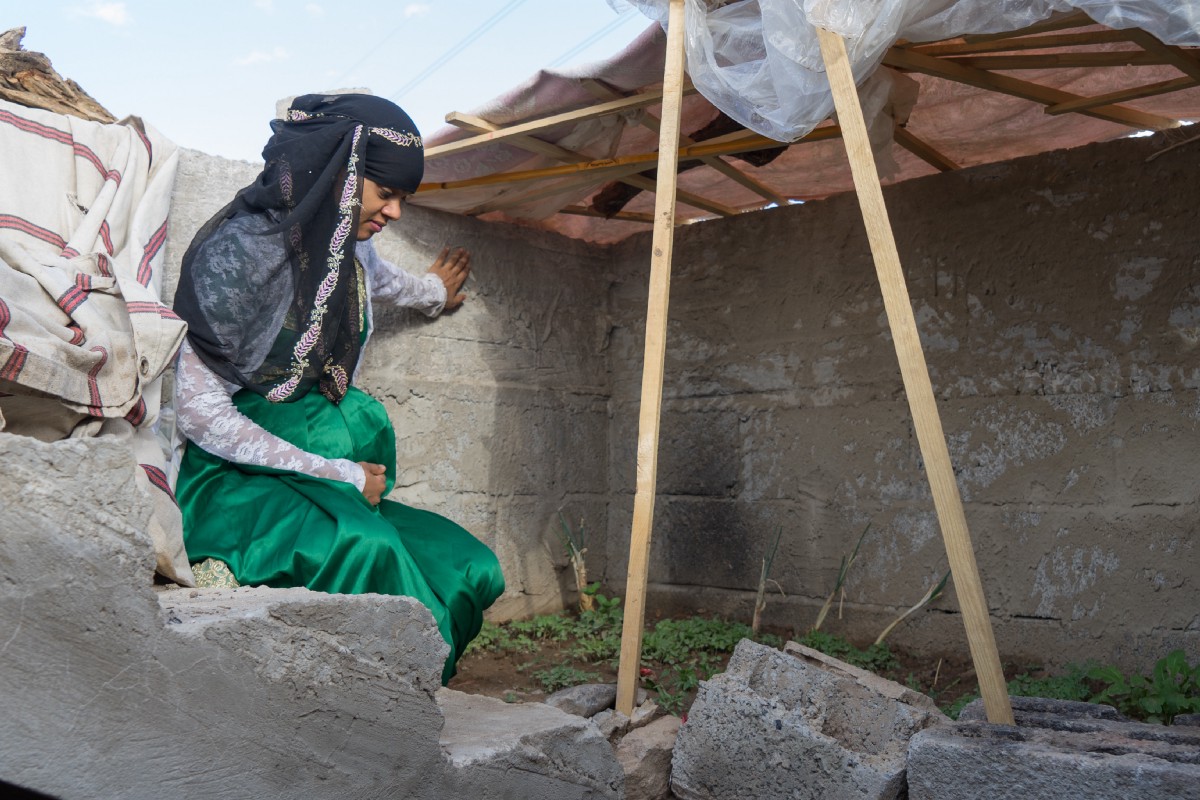 “I depend on the Super Cereal in Ramadan.”

“The war caused us suffering and I did not expect that I would regret getting pregnant. Yemen is the largest open prison in the world. I feel guilty because I will have a child born into this prison.”

But the industrious 28-year-old is determined to be self-sufficient.

“I love vegetables. I planted a garden in the middle of my house so I can grow vegetables for myself.”

“I went out into the street and collected soil. I carried it on my head and put it in the middle of my house. I planted tomatoes, watercress, chilies, and onions.

“I also planted a yellow rose in a plastic box so that I could see it every day and feel life and happiness. I will smell it every day to forget the pain of life.

“I will cut this yellow rose on the first day of peace in Yemen and put it on my baby’s head. I hope that peace is near because I can no longer bear this fear.”