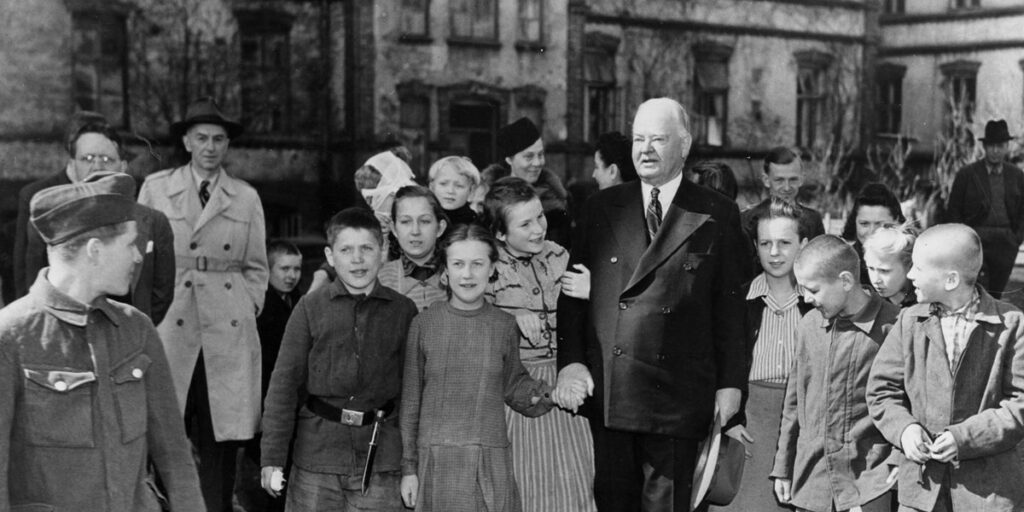 The Greatest Generation’s Easter Mission To Feed the Hungry

Americans will spend an estiamted $150 per person on candy, flowers and gifts this Easter. But before making plans for your celebration, consider what the Greatest Generation was doing at this time in 1946. They were making personal sacrifice, even though they had done years of that during World War II.

But now they had to sacrifice to win the peace and feed those left starving in the aftermath of the war.  This is essential history to remember because today’s global hunger crisis is the worst since that era.

In 1946, instead of spending lots of money on Easter celebrations, Americans gave to the world’s hungry. The Reverend Elmore McKee of St. George’s Episcopal Church in New York said, “It would be shocking indeed for us, to commemorate our Lord’s death, triumph and resurrection, by spending large sums of money for Easter flowers that burst forth for a season and then wither, instead of using the same funds (and more) to rescue lives in Europe, Asia and Africa where famine is a reality for millions of people.”

The church set an example and gave up the flower displays for a food drive. When church members learned of the cause, they even doubled their donations. The church also got flowers anyway for the Easter mass because their members went to the forest to round some up.

Newspaper articles urged the saving of food. The Washington D.C. Federation of Churches asked people to sacrifice meals at Easter time. Overseas relief committees were set up across America to collect donations.

The more food that could be saved at home, the more there would be for the hungry abroad. President Harry Truman canceled the White House Easter egg roll and a simple meal for dinner was in keeping with his call for saving food.

Truman was alarmed by the world food crisis, appointing former President Herbert Hoover as food ambassador. Hoover toured the world, rounding up food supplies because this was an epic emergency.

The prospect of hundreds of millions of people starving to death in lands recently liberated by Allied forces was a horrifying prospect. But famine is the inevitable aftermath of war Hoover warned. Action had to be taken by both the leadership and the citizens.

Truman told the nation, “By our combined effort, we will reduce starvation and, with God’s help, we will avert the worst plague of famine that follows in the wake of war. I ask every American now to pledge himself to share.”

Americans saved many lives by feeding the hungry over the next several years until stability and food production could be restored in the afflicted nations.

We cannot achieve peace without defeating hunger. A new report by World Food Program USA—Winning the Peace: Hunger and Instability—demonstrates how vital food assistance is. They highlight the global school lunch program started by former senators George McGovern and Bob Dole, which struggles to get funding.

Their report says, “The McGovern-Dole program is especially important in the fight against food-related instability given that education is a powerful tool in countering instability.” In addition, “food-for-work asset building initiatives have been long touted as effective deterrents of terrorist recruitment, providing viable livelihood opportunities for vulnerable populations.”

Look at the displacement and suffering caused by the Syrian civil war. Neighboring Jordan has taken in over a million Syrian refugees and this has placed great strain on the host community. But the World Food Program is helping everyone get back on their feet.

In Jordan, the Healthy Kitchen Program trains women from the community to bake pastries for school feeding programs. Fruits and vegetables from local farmers are also included for more than 80,000 Jordanian and Syrian children fed in this groundbreaking initiative.

We need more of this innovation. Reducing hunger, improving educational and economic opportunities is the path to stability. We need to be thinking more in terms of how food can build peace in the world, especially with conflict and drought causing the number of starving people to increase rapidly. The UN says “Some 124 million people in 51 countries were affected by acute food insecurity during 2017 — 11 million more people than the year before.”

We responded to the challenge in 1946, and the Greatest Generation sacrificed to do so. Will we do the same today? This Easter we can make about feeding the hungry and helping the World Food Program, Catholic Relief Services, Mercy Corps, Save the Children, UNICEF and so many others on the front lines of the hunger crisis. And you can also feed those in need at home to by helping your local food bank.

Making feeding the hungry a part of your Easter celebration will save lives and build peace around the globe. As Pope Francis said in his 2014 Easter prayer, “Help us to overcome the scourge of hunger, aggravated by conflicts and by the immense wastefulness for which we are often responsible.”

William Lambers is an author who partnered with the UN World Food Program on the book Ending World Hunger. His writings have been published by The Hill, New York Times, HuffPost, Columbus Dispatch and many other news outlets.