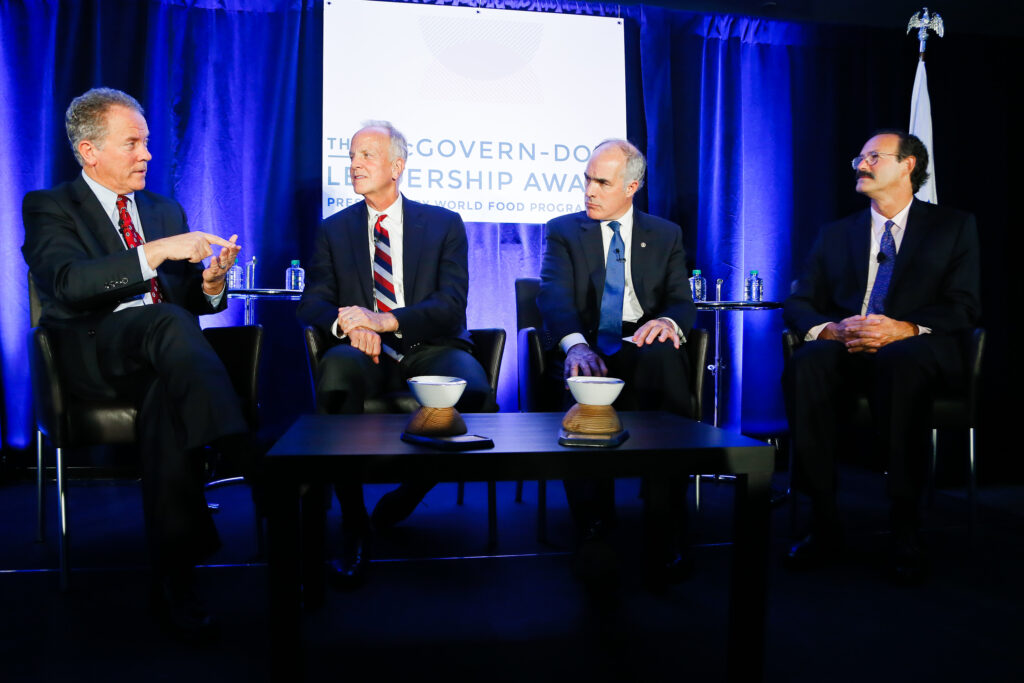 “When it comes to a hungry child, Democrats and Republicans put aside their differences,” said David Beasley, the Executive Director of the U.N. World Food Programme (WFP) during last night’s annual McGovern-Dole Leadership Award ceremony in Washington, D.C. “And that is why I think in spite of all the darkness, there is some light.”

As the lead Democratic sponsor of the Global Food Security Act, Senator Casey helped establish the U.S. government’s comprehensive approach to humanitarian assistance, agriculture development, child nutrition and safety net systems. First introduced in 2009 and signed into law in 2016, the legislation created a “whole-of-government” approach to global food security that emphasizes self-sufficiency, a focus on women and children, agricultural value chains and trade, and resilience-building.

As co-chair of the Senate Hunger Caucus and chair of the subcommittee on agriculture appropriations, Senator Moran has fought for crucial funding for programs like Food For Peace, which has provided U.S. food assistance to more than 3 billion people around the world since it was signed into law in 1954. That’s almost half of the planet’s entire population.

When asked why champions overseas food assistance, he noted the power of personal stories and experiences to illustrate the stakes of this issue. The consequences of hunger have to feel real to resonate, he said.

“I made a trip to Darfur when I was in the House. It was a trip that easily captured me,” Moran said. “The ability to capture people is less of an intellectual thing and much more an emotional circumstance.”

“But I would say as a Kansan, I have always seen the opportunity for agriculture in the United States to feed not only ourselves, but our world.”

Both lawmakers have worked across party lines to improve access to one of the most basic building blocks of life: Nourishing food.

“In the tradition of Senators McGovern and Dole, Bob Casey and Jerry Moran have represented the best of America,” said WFP USA’s President and CEO Rick Leach during the ceremony’s opening remarks about the lawmakers’ efforts to fund humanitarian aid and international development.

“It’s not just numbers on the page, but what those numbers translated into — families and children having hope and opportunity.” 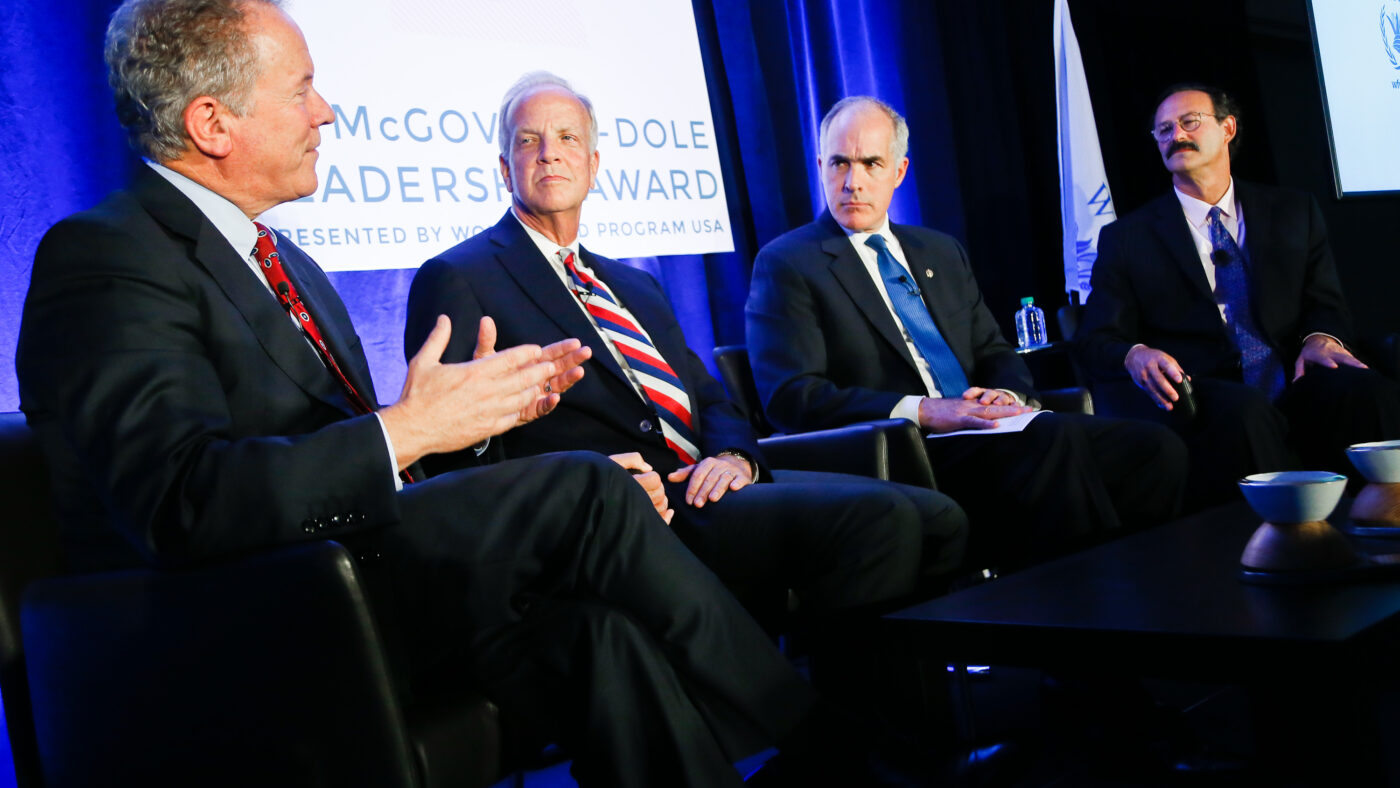 WFP USA’s annual award is named after Senators George McGovern and Bob Dole, two founding Board members of the non-profit organization who together transformed the lives of millions of people through their shared commitment to feeding those in need.

“While they might not have shared political positions on many issues, they were completely united on the issue of hunger,” Leach said.

“Both served the nation during World War II and always carried deep commitment to the ideals and principles upon which the nation was founded.”

The two Senators shaped almost every hunger program in existence—both domestic and international, Leach noted. They built bipartisan coalitions to reform the country’s food stamp program, expand the national school lunch program and establish dietary guidelines. Then, after both had retired, they joined forces to create an international school meals program that has so far fed 22 million children in 41 countries.

“This is a legacy of leadership that has been maintained always. It really is a statement about who we are as a people, and the underlying principles that define Americans.” The U.N. World Food Programme (WFP) has relied on U.S. funding to carry out its life-saving work since its founding more than 50 years ago. As ongoing conflict continues to push millions of people into hunger, this American legacy remains as important as ever.

During the event, former U.S. Ambassador to Tanzania Mark Green, now the head of USAID, called the Global Food Security Act a “game-changer” for transforming how the U.S. government helps feed the world. USAID is the single largest donor to WFP. As the leading humanitarian agency fighting global hunger, WFP reaches 80 million people in 80 countries each year with food assistance.

Green spoke about a recent visit to a food distribution site in Ethiopia, where smallholder farmers were struggling to cope with a drought that had crippled their harvests. He encountered one woman who had just received a bag of grain stamped with WFP’s logo. She had one question: “Can you help us with irrigation so that I don’t have to do this ever again?”

“That’s why we do all of this,” Green told the audience. “We take care of immediate humanitarian needs, then we give them tools to provide for their own families. That’s why all of this matters.” “Every administration in modern times has made a major contribution to humanitarian and global development assistance. And I’m proud of this tradition,” Green added.

The event featured a panel discussion on the stakes of global food security and efforts to keep humanitarian assistance and international development at the top of America’s agenda. In addition to the obvious moral imperatives for global hunger relief, food insecurity also poses serious risks to national security interests. As Beasley noted during the panel, the number of hungry people in the world has gone up for the first time in a decade — and conflict is the main cause. “A one percent increase in food insecurity causes a two percent increase in migration,” he said of the link between hunger and instability.

“If we end the wars, we can end world hunger,” Beasley concluded.

“I have no doubt about that because of the experience and expertise of people like you in this room,” he said. “And because leaders like Senator Casey and Senator Moran—from two different places in the U.S. and two different parties—are coming together and demonstrating to Americans and the rest of the world that we will continue to lead.”