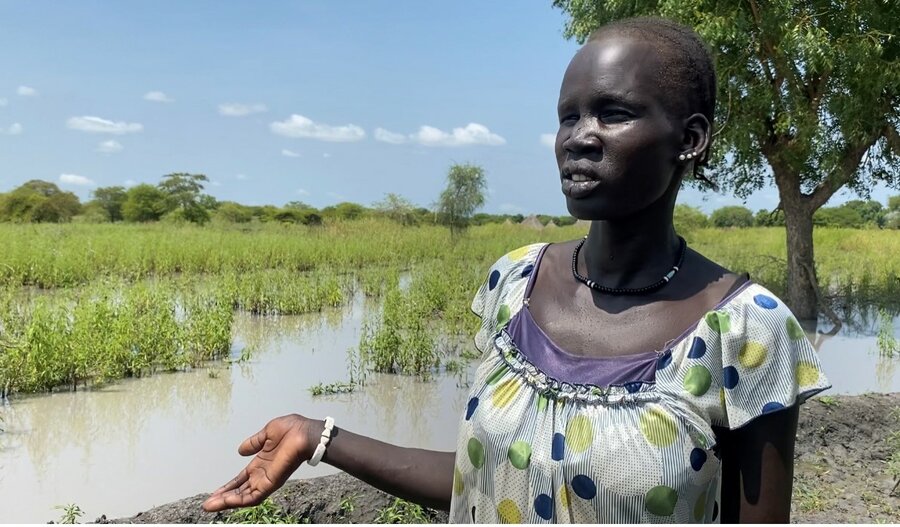 Gunshots past midnight startled Nyaloka Puok wide awake. Confused, she wondered if fighting was breaking out in her village of Paguir. Another fear soon gripped her as she remembered her community had agreed to use gunfire as a warning: the waters are coming.

The 37-year-old single mother of four rolled off the cot onto the ground and scrambled out of her hut to find that the dyke has burst again.

“I could see the water rising with my own eyes,” said Puok, recalling how massive floods washed away her precious crops, forcing her and her children to live on wild fruit and water lily bulbs.

Two years later, the floodwaters are yet to recede and are making cultivation impossible. “Under this water is my land,” said Puok, pointing to where sorghum once grew. “Hunger has been with us for two years and my children and I always sleep hungry.”

“This water is too much, we tried our best, but it is defeating us,” said Nyaloka Puok.

Over the past three years in South Sudan, the harvests lost due to massive floods would have fed people for up to eight months. Instead, all the crops were destroyed time and time again. Initial studies from the United Nations Food and Agriculture Organization (FAO) suggest that about 170,000 acres of land have been damaged due to floods while 800,000 farm animals have died. The United Nations World Food Programme (WFP) forecasts a rise in hunger this year by 7% as small-scale farmers – like Puok – have no way of providing for their families. 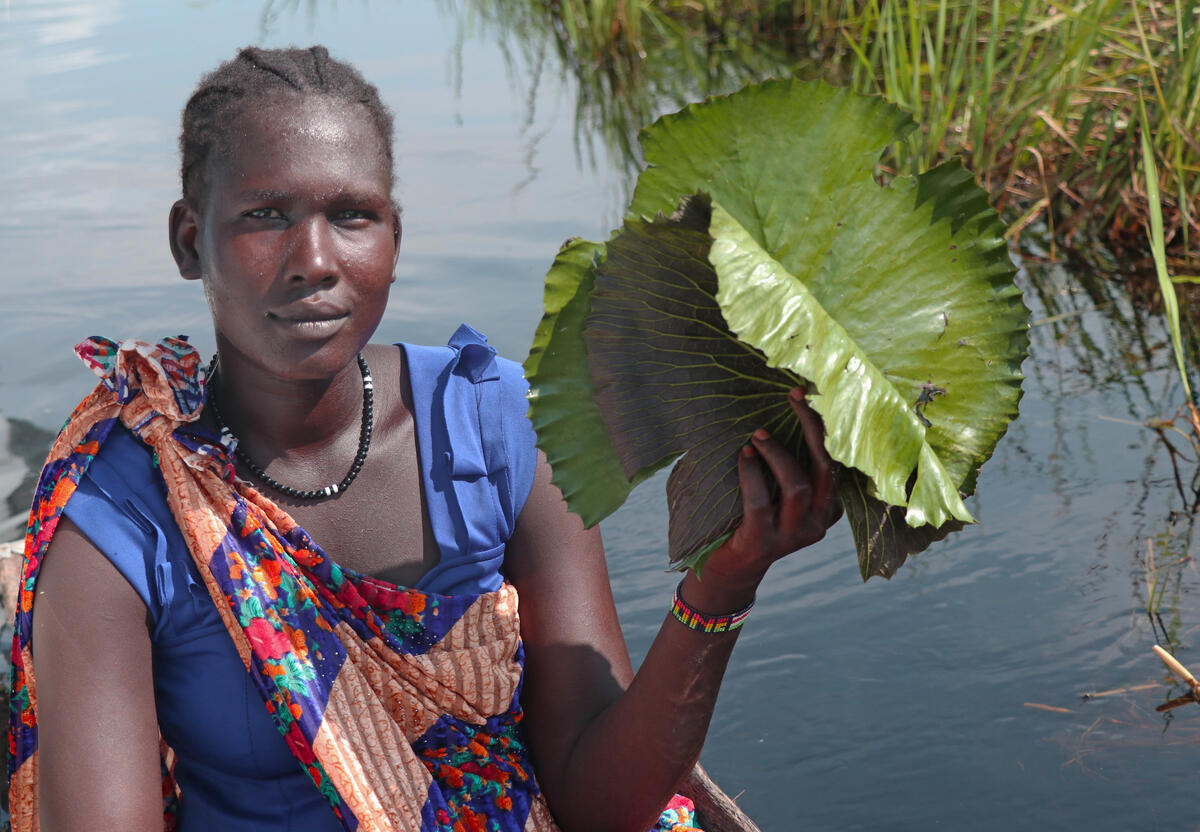 A woman from Paguir village in Old Fangak lifts up a water lily she has gathered from the floodwaters surrounding her village.

Three consecutive years of widespread flooding and localized areas of drought, coupled with increasing local violence and high food prices, have pushed communities to their limit.

“The climate crisis in South Sudan is compounding the dire conditions in which many poor communities live. Lives will be lost if aid organizations are unable to offer sustained support. A narrow window opportunity is getting smaller by the day. Now is the time to act,” said Matthew Hollingworth, the U.N. World Food Programme’s representative and country director in South Sudan. 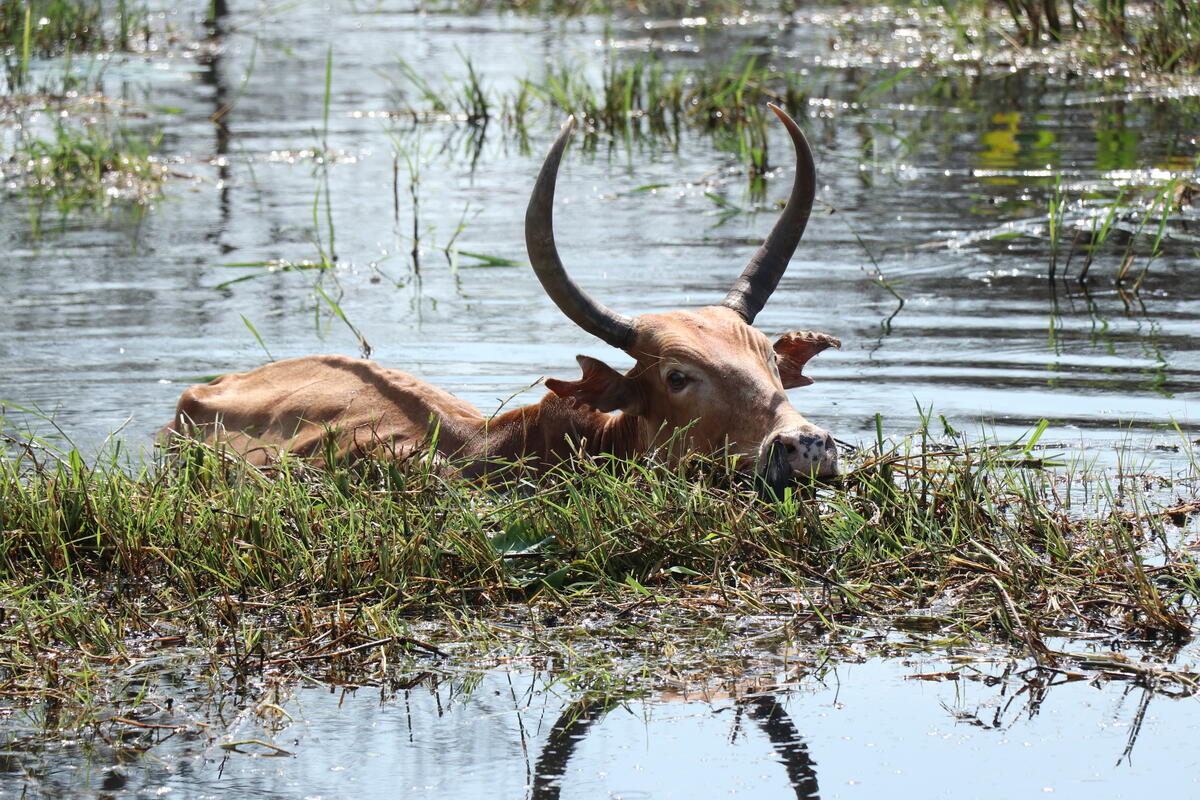 Hungry cattle have been forced into the floodwaters to graze.

Much of South Sudan is now under water. Experts say it is unclear when the water in the flood zones is likely to recede or whether it can evaporate fast enough before the rain season begins, meaning more danger may be ahead for millions of people.

Back in the village of Paguir, Puok built a dyke out of stacked mud to keep the water from encroaching on her home. She lies awake at night listening intently in case the dyke breaks.

“Water slowly creeps closer, so it is hard to stop monitoring,” she said. If the dyke bursts, the water could flow into the hut and drown her and her children in their sleep.

“We are tired and suffering. This water is too much,” said Puok. “We tried our best, but the water is defeating us. These floods came two years ago and since then we have been living in water.” 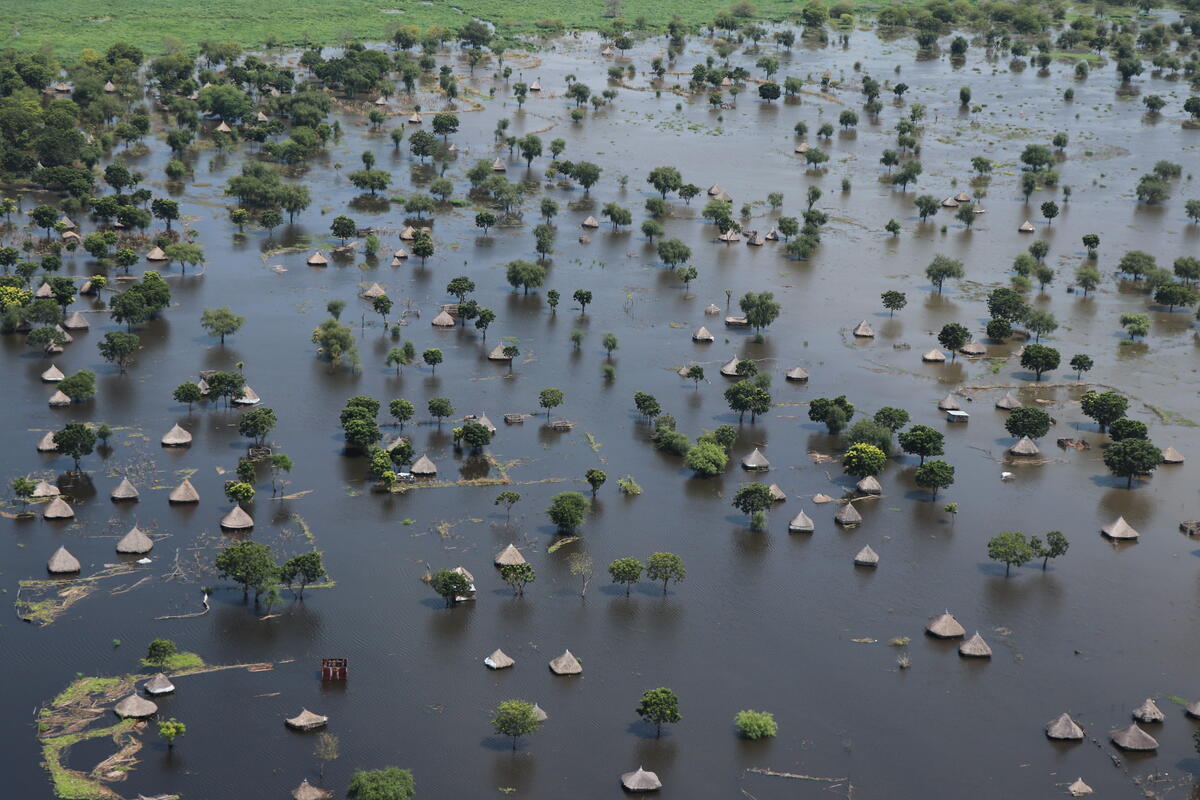 Much of South Sudan is now under water. Initial studies from FAO estimate about 170,000 acres of land have been damaged.

While tremendous challenges lie ahead as vast swathes of land remain waterlogged and hundreds of thousands of people remain displaced, the U.N. World Food Programme is working with flood-affected communities where it is feasible to build protective dykes around areas at risk of flooding. We are also working to salvage roads destroyed by three years of floods and keep routes open for travel.

South Sudan is facing its hungriest year ever with 70% of the population (8.3 million people) expected to face hunger during the peak of the lean season. The consequences of inaction in South Sudan will be measured in the loss of lives and livelihoods.

The story originally appeared on WFP’s Stories on February 22, 2022 and was written by Marwa Awad. A version of this story has been published in Newsweek.