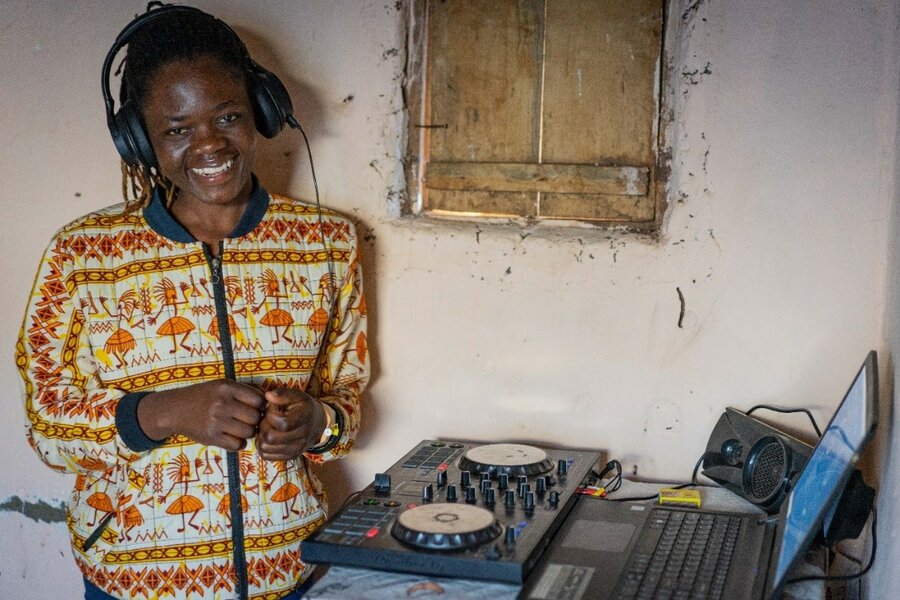 This year, the United Nations is dedicating World Youth Skills Day to the young people around the globe who have shown creativity and resilience in the face of crises.

To mark the day we would like to introduce five refugees who left their homes in the Democratic Republic of Congo (DRC) and are now living in the Dzaleka refugee camp. The camp is about 30 miles from the capital of Malawi and is home to over 43,000 refugees and asylum-seekers from across Africa.

Despite some initial backlash  from her community and family for being the only female DJ playing at clubs within the camp, 24-year-old Goldine aka “DJ La Pearl” has held on to her passion for music since she arrived here 10 years ago from the DRC.

She had always been curious as to how DJs could switch to music so smoothly. Noting her love for mixing music, a friend in the camp began to teach her how to DJ and had her start at a club in the camp after only two weeks of practice.

“After I started playing at clubs, people would say so many negative things like, ‘Girls should not do such kind of things’ or ‘She’s losing her morals.’ But music is my passion and it makes me feel good, it makes me forget bad things whenever I see people happy and enjoying themselves,” said DJ La Pearl. 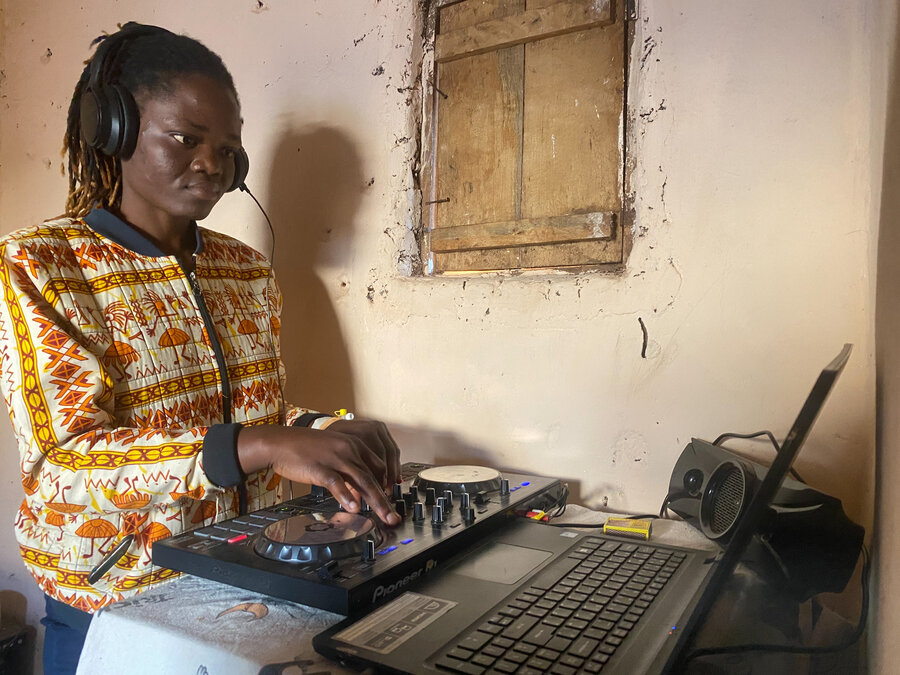 La Pearl is turning the tables on hardship.

With the increased spread of COVID-19 casting a shadow on the future, educator Raymond from Dzaleka has taken a proactive approach to teaching. When schools were closed for seven months and he could not teach at the local secondary school within the camp, he began providing lessons free of charge via a messaging app. The lessons are provided through audio and video recordings, and Raymond has reached over 190 students since he began. 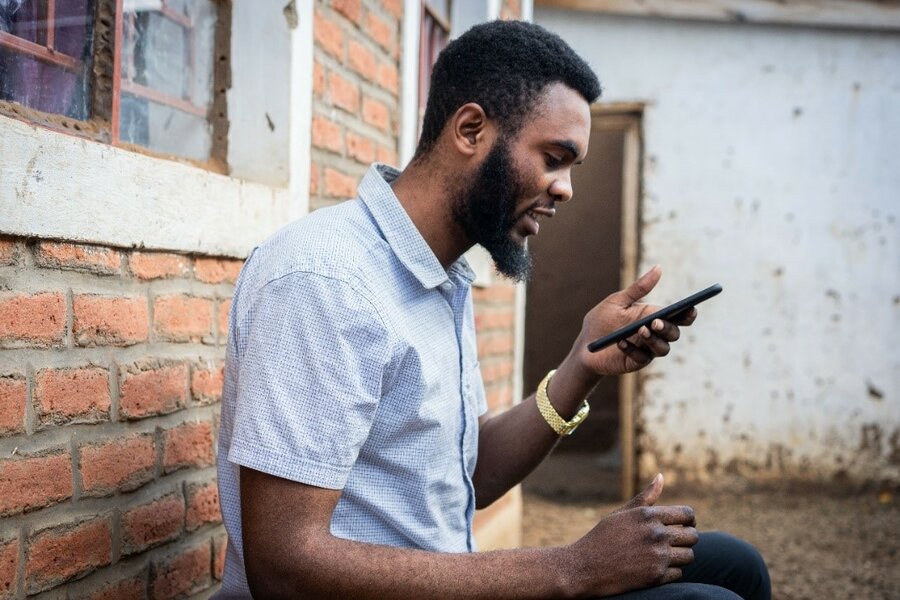 Raymond providing a lesson via audio.

“I have had students who managed to learn English, driving or computer skills,” says Raymond. He hopes providing these basic skills and training to people who would otherwise not be able to access such an education.

“It’s tough to build your life in the camp and even worse without any form of education, training or skills. But with these skills, I know some people will be able to find a way to make it work.”

Obadiah always had a passion for music, having learned several instruments back home in the DRC. Since he arrived at Dzaleka, he has been honing his talent.

“When I sing, I forget all the bad things and get hopeful for the future,” he says as he tunes his guitar.

By playing at festivals and events within the camp, Obadiah has met artists from Lilongwe who invited him to play alongside them during festivals. 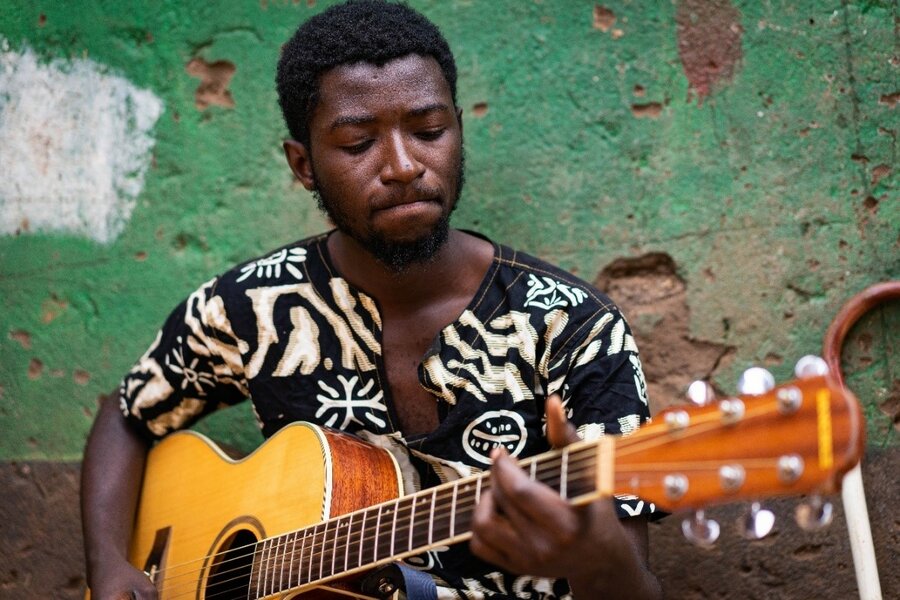 Obadiah has not played outside of the camp due to coronavirus restrictions.

COVID-19, of course, put an end to that, but he still plays. “I have still been practicing and I am hoping that I can get back to performing soon when this [pandemic] is over,” he says. Using the music as his escape, Obadiah is now telling the story of how he left the chaos behind. 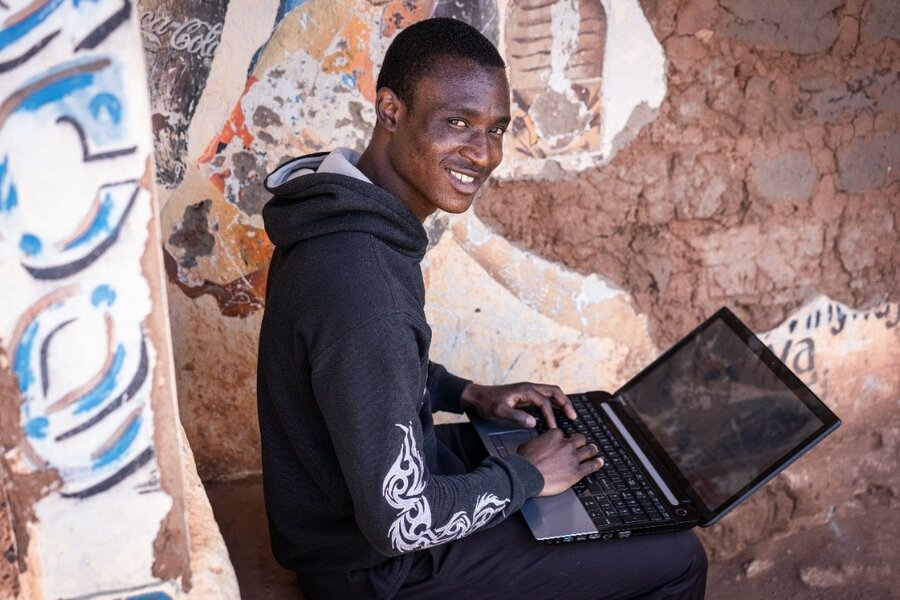 Andy created his own messaging app and hopes it will take off in future.

Andy was only 16 when he arrived in Malawi after escaping an armed group where he was recruited as a child soldier. Fortunately, he was reunited with his mother three months later in Dzaleka and together they began their new life.

He enrolled in vocational skills training, where he learned how to code. “I created my own messaging app. Initially, it was only for my girlfriend and I, but I hope it will take off one day,” says Andy.

Junior Mafia is an upcoming music giant and entrepreneur. Still in secondary school, the 16-year-old was born in Dzaleka to parents who fled the DRC. He is a beatmaker and producer who has learned his craft by studying producers and artists within the camp. In 2018, when he was only 14 years old, Junior created his very first beat and since then has built his own makeshift studio in the camp. 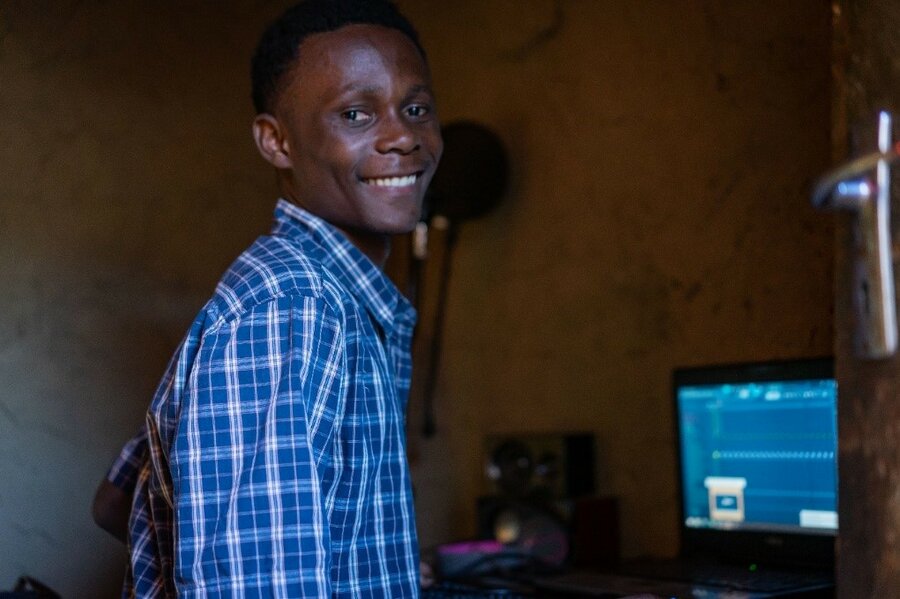 Junior Mafia has been making beats and producing music since he was 14.

“Now that I have a studio, I even offer recording for up and coming artists in and outside the camp,” says Junior. By sharing his passion, Junior plans to become one of the biggest producers in Malawi.

The needs of refugees have been increasing in recent weeks due to COVID-19 outbreaks. The U.N. World Food Programme (WFP) is providing those in the camp with food and cash assistance, but needs $3 million to support an additional 3,000 families.

To learn more about our response to the COVID-19 pandemic, click here.