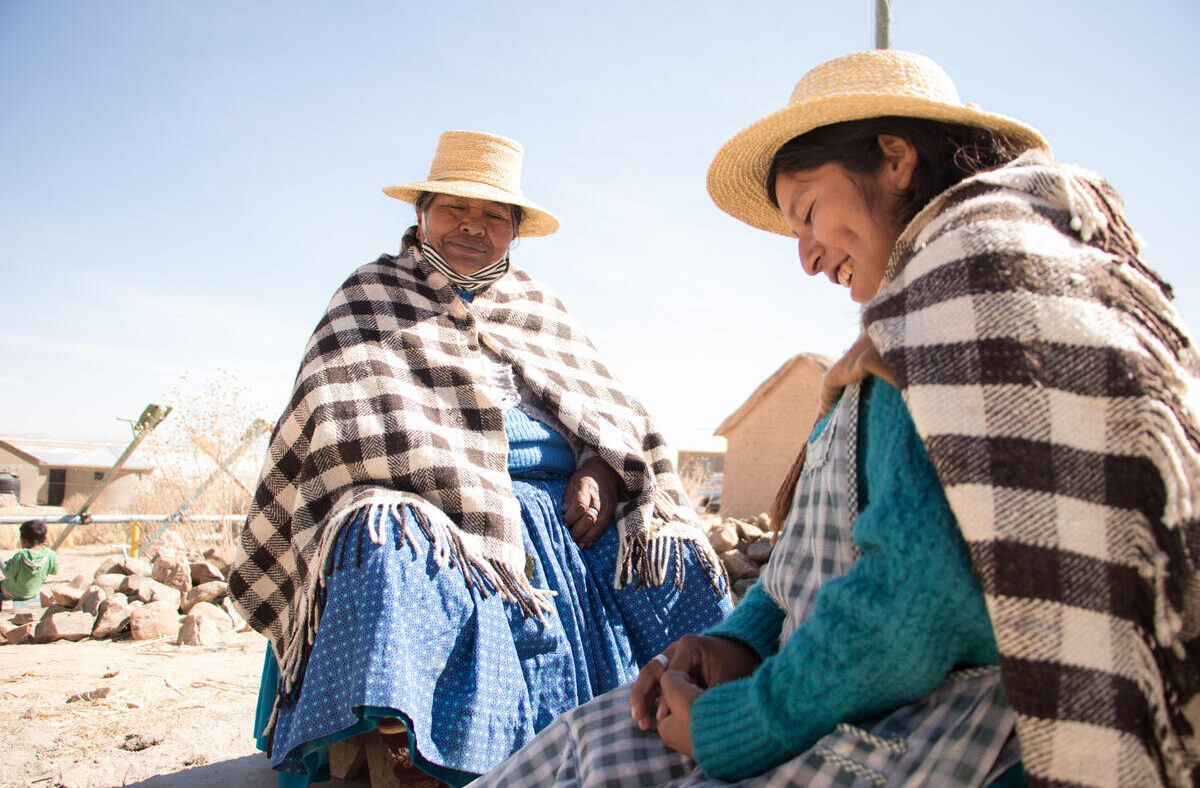 A Country in Progress

With the right to food enshrined in the Constitution, Bolivia is committed to ending extreme poverty by 2025. We’re on the ground helping to make this a reality, and you can help.

Bolivia has made great strides in improving food security and reducing extreme poverty – but it’s still one of the poorest countries in South America.

of children under the age of 5 are chronically malnourished

Without progress in adapting to climate change, hunger will increase by 22%

In the last decade, Bolivia has made significant progress on improving food and nutrition security and reducing extreme poverty. Due to this notable socioeconomic improvement, Bolivia accomplished a middle-income status. However, Bolivia remains among the poorest countries in South America. Four out of ten women still live in poverty, and the frequency of gender-based violence remains worryingly high.

Malnutrition remains a major public health concern. While the stunting rate for children under the age of 5 has dropped from 33 to 16% in ten years, in rural areas it remains as high as 23.7%. Nutritional problems are caused primarily by inadequate diets and poor consumption of nutritious, local foods.

Bolivia is considered the most vulnerable country to the effects of climate change in South America. The government declared a national emergency due to drought in 2016 and in 2018 due to floods. Analysts predict that vulnerability to hunger will increase by 22% by the 2050s unless measures are taken to adapt to a changing climate. Recurring droughts, floods, frosts and hail aggravate the situation of the agricultural sector, threatening the food security of the most vulnerable groups.

We’ve been inBolivia since 1963, with our role evolving from directly providing assistance to supporting the government’s efforts to address food insecurity and malnutrition through technical assistance, advocacy and communications. 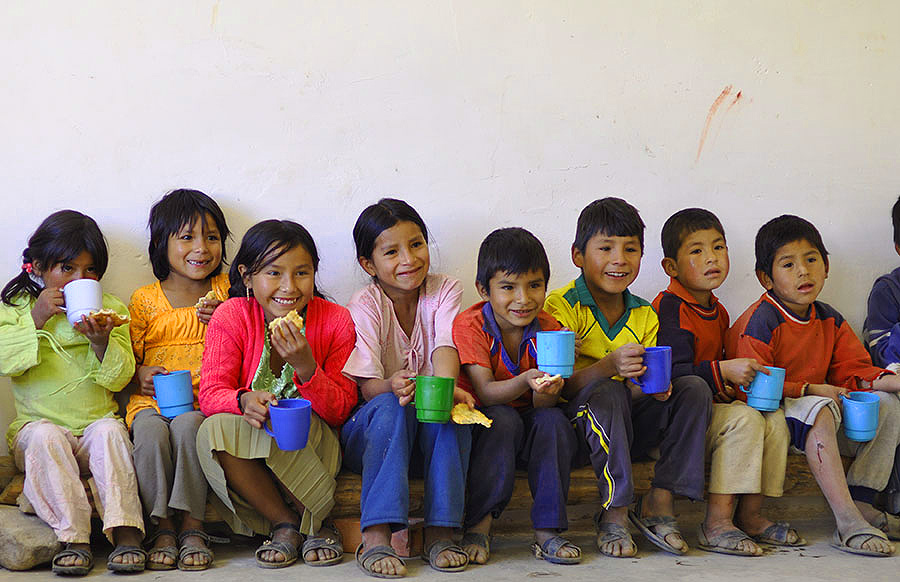 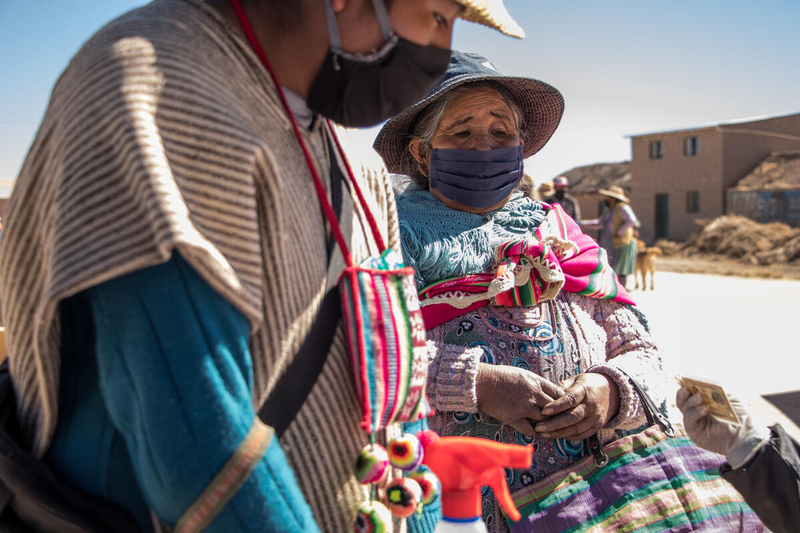 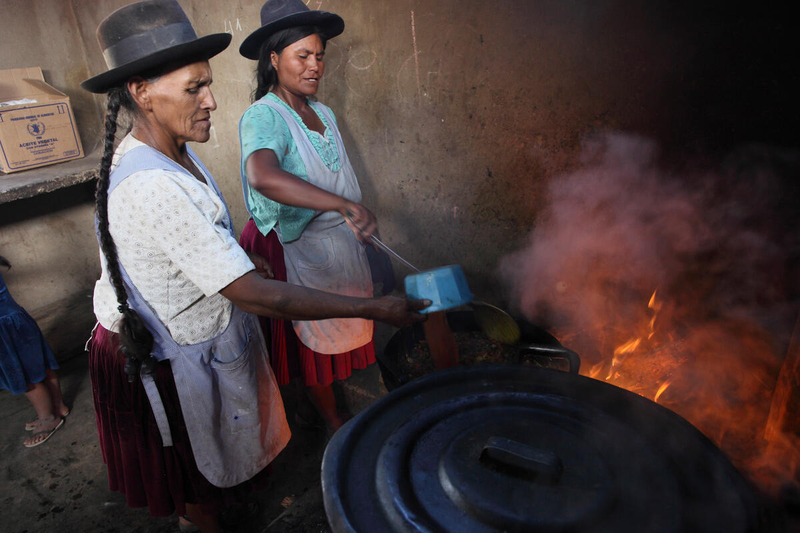 We provide people affected by natural disasters with cash assistance to access to the food they need. In exchange, they engage in activities that will help them withstand and respond to shocks better in the future including the creation of canals, bridges, wells, dykes and roads.

Help Save Lives by Sending Food

You can help deliver food to vulnerable populations in Bolivia and other countries by donating to WFP.

Read the latest news updates and stories from Bolivia: 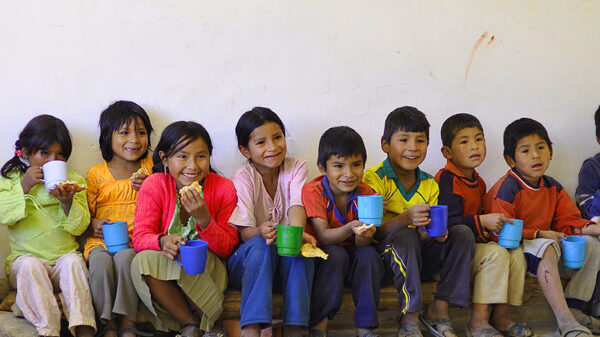 “When children arrive at school hungry after walking up to three kilometers, they cannot concentrate or assimilate what is being taught,” said Sergio Torres, head of WFP’s Bolivia operations.

That Bolivia is one of the poorest countries in Latin America is especially evident in its mountainous rural areas, where 80 percent of the population lives below the poverty line. In high-altitude regions like Chuquisaca — site of the nation’s capital, Sucre — indigenous people depend on subsistence agriculture for their food and livelihood and regularly grapple with natural disasters and poor agrarian conditions.

As a result, nearly two-thirds of households do not earn enough money to afford the minimum amount of food necessary for healthy living, according to the United Nations’ World Food Programme (WFP). Often, children are the hardest hit. They are not only malnourished, they must also endure long walks to school because of the remoteness of their homes.

“When children arrive at school hungry after walking up to three kilometers, they cannot concentrate or assimilate what is being taught,” said Sergio Torres, head of WFP’s Bolivia operations.

Having a safely prepared and nourishing meal awaiting them can provide benefits beyond the immediate alleviation of their hunger.

In 2012, sweetener brand Truvia teamed up with the WFP to improve the lives of people in these communities. The goal of the three-year charitable initiative, Sharing a Sweet Future, was to “address childhood hunger with a focus on giving children the proper start they need to live a better life through nutrition safety and education,” said Brian Marx, marketing manager at Truvia.

The program aims to help kids learn better — setting them on a path out of poverty — while also encouraging parents to keep their children in school in the first place. In addition, such readily available meals can ease the strain parents face putting food on the table with such minimal financial resources.

Truvia’s $900,000 commitment funded the purchase of ingredients, such as wheat flour, salt, vegetable oil and micronutrient powder, which fortified school meals with iron, Vitamin A and iodine. The latter are all vital components in protecting against ailments like anemia and goiter, according to Torres. During its first year, the program helped feed 21,000 children in 10 municipalities in the country’s southeast Potosi region.

“Truvia’s support came at a time when we didn’t have any resources, and were almost going to close this type of program,” Torres said.

In the Chuquisaca region, where the program continued for three years, more than 46,000 students and teachers benefited each day from the two enhanced meals — breakfast and lunch, according to Marx. The lunch ingredients, meanwhile, were often sourced from local farmers, thus “helping lift those farmers out of chronic hunger and poverty themselves,” said Rick Leach, president and CEO of the World Food Program USA.

Truvia’s decision to offer a three-year commitment in Chuquisaca ensured continuity for the effort — a necessity to accurately assess the impact of such a program, Torres explained. To determine if a child “stays in school, [shows] improved learning and skills, and is healthier than before is only possible in a multi-year program,” he said.

The results shown over the long term will also help municipalities make the case when seeking funding from other sources or deciding whether to include school meals in their future budgets, Torres added.

Another legacy of the money donated by Sharing a Sweet Future is the construction of 258 energy-efficient and properly ventilated mud stoves for every school in Chuquisaca. The old stoves produced great amounts of smoke in very small areas, creating an uncomfortable and dangerous environment for cooks (often mothers of the kids at school), while also adversely affecting the environment, according to Torres.

Not only are conditions healthier in the makeshift kitchens, but since the new stoves require less wood, they also help in the fight against deforestation. The more efficient stoves have also reduced the amount parents are charged by the schools for the consumption of wood.

“As a part of the program’s educational component, the Bolivians received training in how to build, maintain and cook with these safer, more energy-efficient stoves,” Marx said. Now that many parents have seen firsthand the benefits of having this kind of stove, they have begun to install them in their own homes.

Self-sufficiency is the ultimate goal of the program, Leach explained. “Ultimately, countries need to run their own safety net systems,” he said. “Our goal is to build capacity so that we don’t need to be there.” The measure of success, he said, is when WFP’s involvement is no longer required.

But if that’s the end game, everything starts with the children, Torres emphasized. “They will not go to school if there are no school meals. If they don’t go to school, we have a lost generation.”

The completion of primary school is one of the United Nations’ eight Millennium Development Goals toward ending poverty. During the three years of the program, “we were able to graduate those who started out as fifth-graders,” Torres said.

He added: “Truvia’s support was very important. It shows that it is possible for a company like Truvia to make that type of change in these types of countries and to really change the life of the children.”

Truvia is now working with WFP to determine the next steps for this initiative. “But at the end of the current program, we’re proud to say that we surpassed several of our original goals,” Marx said.

This article originally appeared in Forbes.