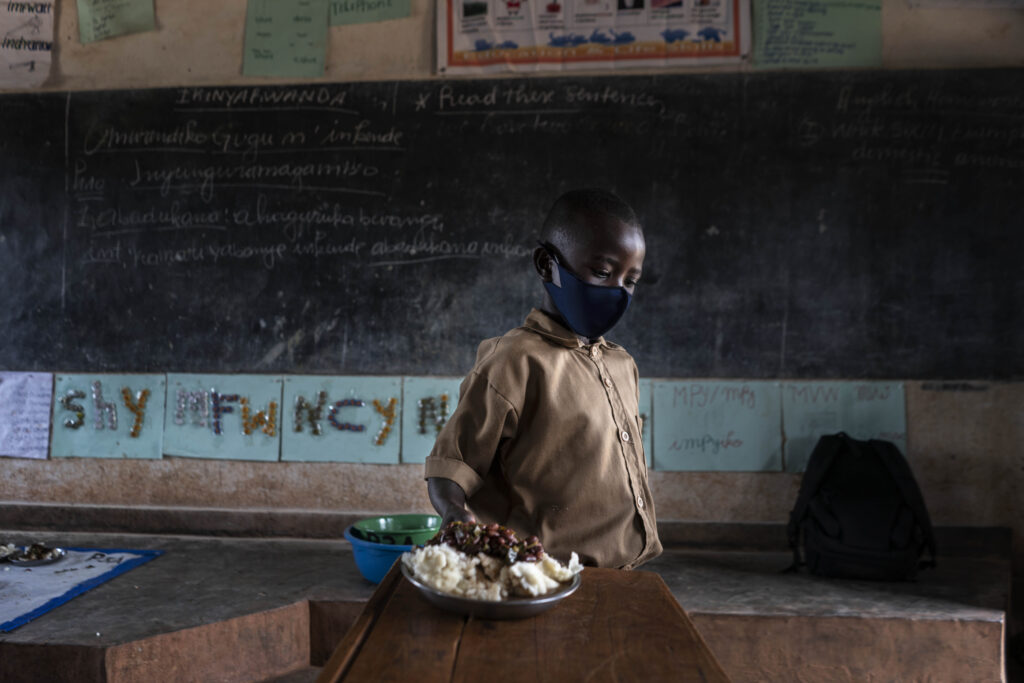 10 Facts About Child Hunger in the World

While hunger is a devastating reality for millions of children around the world, we have the power to save them.

From Nigeria to Syria, children across the globe face the risks of severe hunger. Those who survive may be plagued with lifelong effects ranging from stunted growth to weakened immunity to illnesses like the common cold.

Here are the ten most important things to know about childhood hunger and what the United Nations World Food Programme (WFP) is doing to fight it.

1. A Child Dies Every 10 Seconds From Malnutrition

It’s a tragic truth that more than 3 million children die from hunger every year. And between conflict, climate change and the COVID-19 pandemic, the number of hungry children is on the rise. 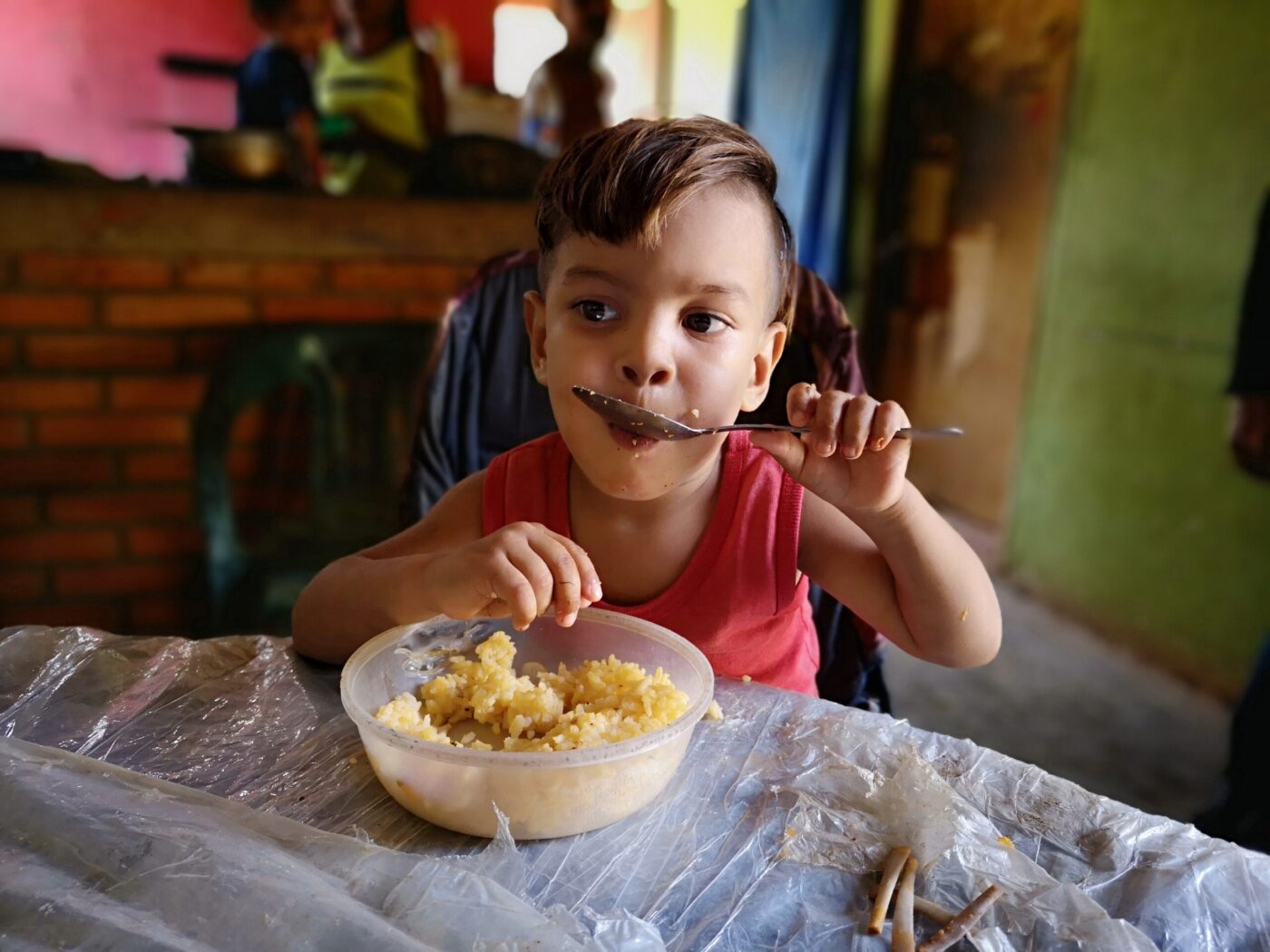 Three-year old Leonel eats lunch at his home in Venezuela. He gets a U.N. World Food Programme take-home ration every week as part of our new school meals program in his country.

2. Nearly Half of All Deaths Among Children Under 5 Are Caused by Hunger

A child’s death sends shockwaves through a community and sadly, 45% of young lives under the age of five are lost to hunger and hunger-related causes. 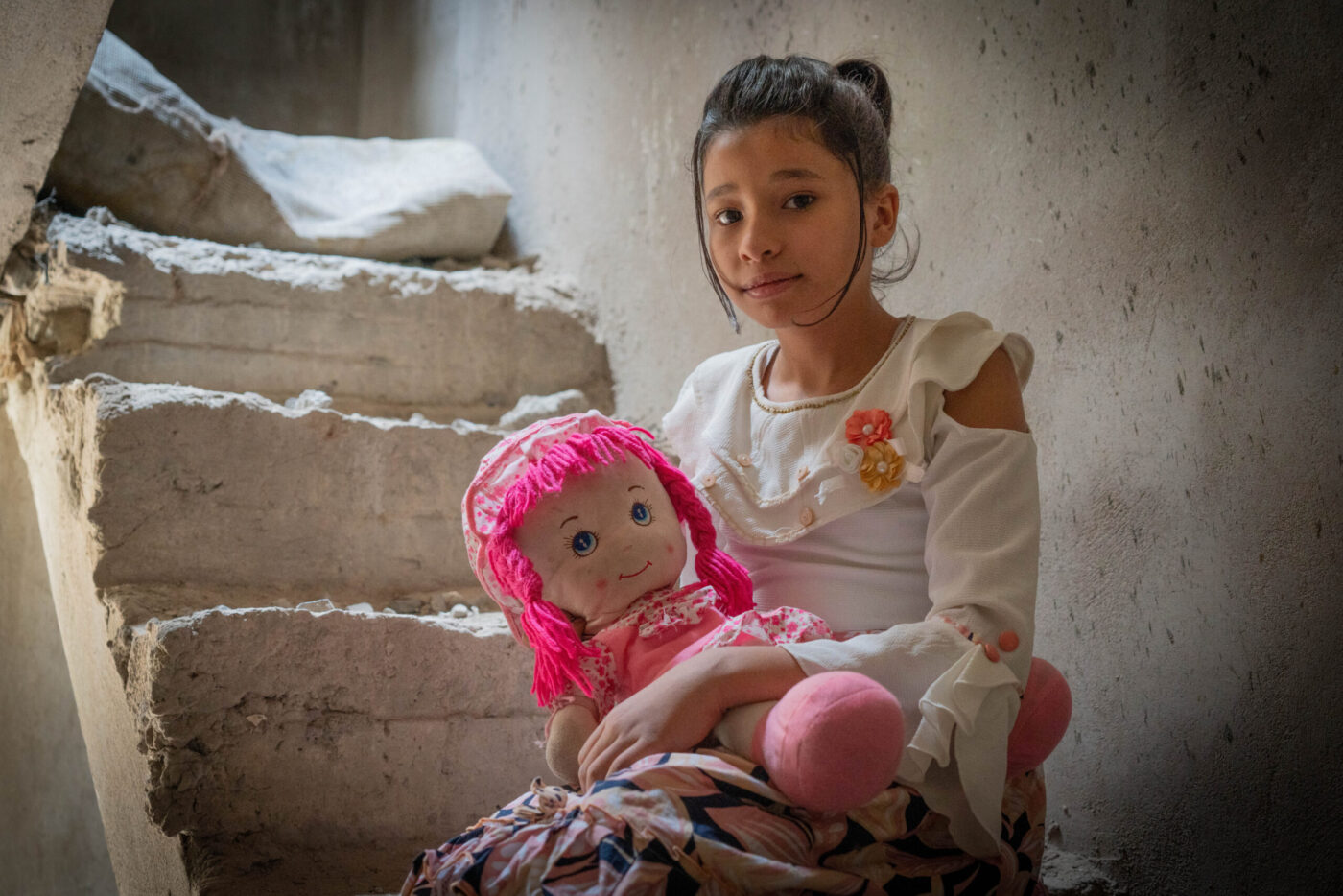 At 12, Amina has lived through five years of war. “The war can get you in many ways,” she says. “People suffer when their homes are taken away. People die of hunger and there is not enough water.”

3. Kids Are Most at Risk of Starvation in Conflict Zones

Children bear the brunt of the inevitable spread of hunger that comes with ongoing violence. Children living in countries ravaged by war are more than twice as likely to be malnourished as their peers, and 40% of all displaced people are children. 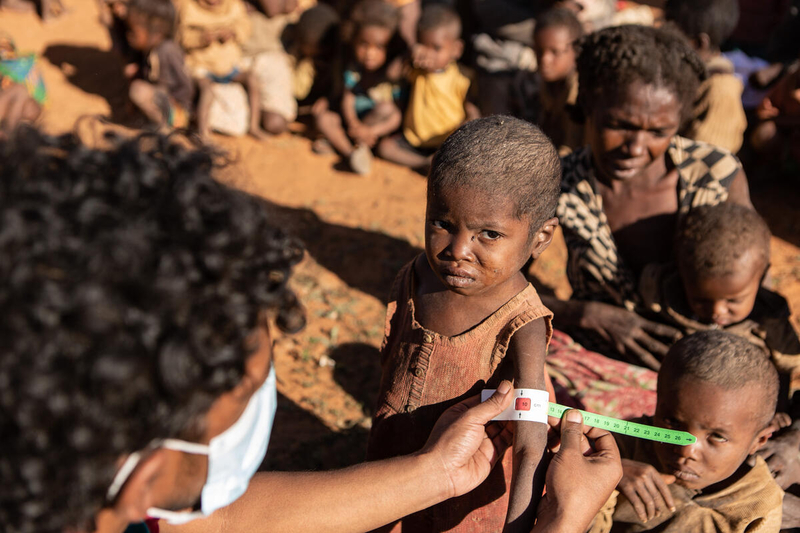 Retoboha gets her arm measured by U.N. World Food Programme staff in Madagascar, where malnutrition in kids under 5 has almost doubled this year in the face of drought and insecurity.

It’s a staggering number and one with far-reaching consequences. Young children and infants depend on their caregivers for nutrient-dense foods that support their growth, development and immunity. But in low-income or conflict-ridden countries, nutritious foods are often out of reach.

5. Young Girls Are Especially at Risk of Hunger

More than 60% of the world’s hungriest people are women and girls. Inequality – from early marriage and young motherhood to cultural barriers and lack of education – means girls are much more likely to be malnourished, causing immediate and long-term health problems.

6. Children Are More Than Twice as Likely to Face Extreme Poverty

More than 350 million children face the reality of extreme poverty and that means facing hunger every day. Parents surviving extreme poverty – defined as living on less than $1.90 per day – have to make regular, often heartbreaking decisions when balancing the cost of food with housing, healthcare and other basic needs. 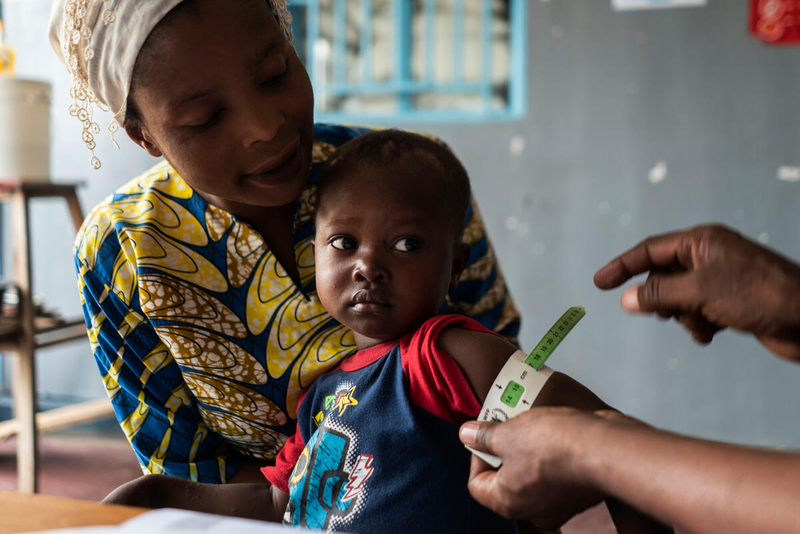 Maitre’s arm is measured during a routine check-up in Kalemie, Democratic Republic of Congo (DRC). Maitre became malnourished in 2020 after his family was displaced due to conflict. He has now made a full recovery thanks to nutrition support from the U.N. World Food Programme.

7. Countries Across Africa Have Some of the Highest Rates of Child Malnutrition in the World

Due to natural disasters, conflict and poverty, families across the African continent are amongst the most highly impacted by food insecurity and child hunger. From South Sudan to Ethiopia, a shocking 61 million children are experiencing stunted growth due to malnutrition. However, while Africa has some of the highest rates of childhood hunger, Asia is home to the highest number of children facing hunger.

8. The COVID-19 Pandemic Has Pushed Millions More Children Into Hunger

The pandemic continues to drive families into hunger and poverty, hitting the world’s most vulnerable children especially hard. When schools closed in over 199 countries, an estimated 370 million children were affected by the creeping impacts of hunger. 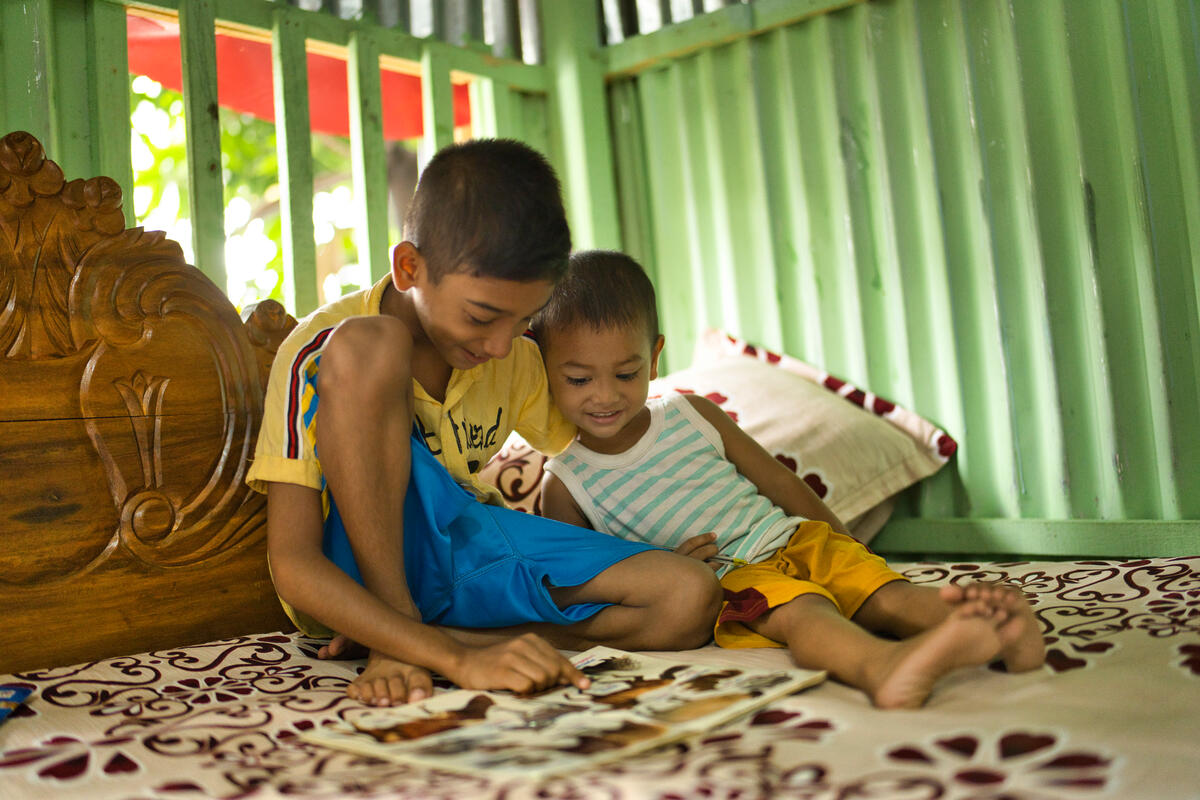 Yasin helps his younger brother Junayed learn about animals in Bangladesh. Their family gets a weekly food package from the U.N. World Food Programme to help them stay healthy.

When a child has daily access to healthy meals and other critical resources like health services and vaccines, they’re able to focus on learning, growing and enjoying their childhood. Our School Meals program serves as an essential safety net, providing more than 15 million school children around the world with lifesaving nutrition, health, education and hope. In the face of COVID-19 related school closures, we adapted our school meals program – the largest of its kind in the world – to provide food vouchers and take-home rations so children could continue to eat healthy foods.

10. More Than Half of WFP’s Beneficiaries Are Children

The most crucial nutritional window for a child happens between conception and their second birthday – their first 1,000 days of life. That’s why we step in to support pregnant and breastfeeding mothers and young children with the nutrition support they need. In 2020, we reached more than 17 million mothers and children through preventative and nutrition treatment programs. In fact, 58% of the people that the U.N. World Food Programme serves are children.

Childhood hunger is one of the biggest – and most preventable – issues of our time. But kids don’t have to go hungry. Through school meals, our First 1,000 Days programs and more, the U.N. World Food Programme is doing everything we can to save them.