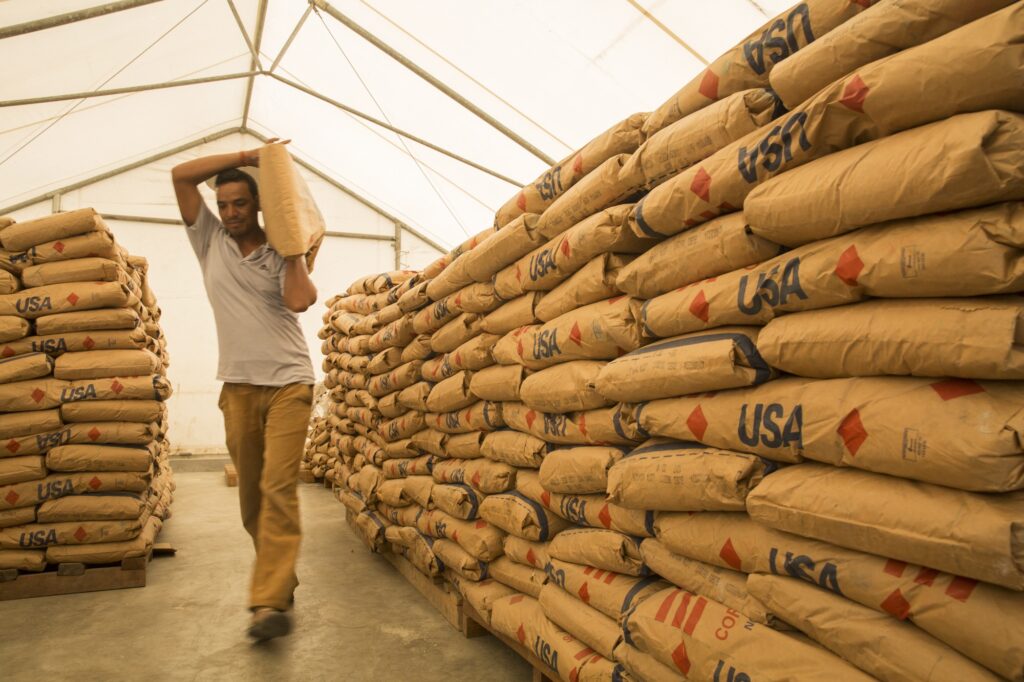 In 2014, a 60 Minutes crew traveled to the border of Jordan and Syria. It was a desolate “no man’s land” where many Syrian refugees had fled after three years of civil conflict.

As hundreds of people became visible on the horizon — the end of a 300-mile journey — they described what they saw as people “pouring over the land like a flash flood.” Some came without shoes, others with only one set of clothing.

Scott Pelley, a member of that crew and now anchor of the CBS Evening News, reflected on his time observing what the World Food Programme (WFP) was doing to alleviate the hunger of nearly 1.5 million Syrian refugees every month. To his viewers, Pelley remarked that WFP might be “one of the best ideas America ever had.”

That idea was but one crucial step along a remarkable journey that continues to this day.

Over the course of seven decades, the U.S. government and its people have led the global fight against hunger. It’s a legacy built upon a proud and loud declaration that America — through the actions of everyday folks and the decisions of their public representatives — will do its part to help feed families in need around the world.

Food assistance as we know it today began after the Great Depression. The U.S. government equipped struggling farmers with tools and financial support to boost their incomes. As they succeeded, they needed new markets for their crops. That market would become hungry families and farmers in countries abroad.

And so the stage was set: To marry the comeback of the American farmer with the fight to end hunger. It was a grand bargain driven by the belief that the United States had a unique role to play on the world stage. That American generosity, self-interest and ingenuity could be harnessed to bolster economic development abroad and save the lives of innocent children impacted by war and natural disasters.

Since that moment, this American legacy has been built milestone by milestone.

Take a journey with us here at World Food Program USA as we share with you how fighting hunger has become part of America’s DNA. 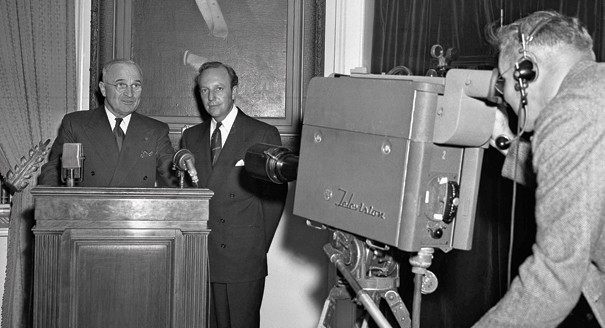 One year after signing into law a national school meals program to help feed disadvantaged children in the states, President Harry Truman turned his sights toward Europe.

In the first-ever televised presidential address, Truman talked about fighting hunger in countries across the continent still recovering from the ravages of World War II.

As Austria, Italy, and France faced terrible food shortages, he called upon his fellow Americans to conserve food by giving up meat on Tuesdays, eggs and poultry on Thursdays and saving a slice of bread each day.

He also asked farmers and distillers to reduce their grain use — a direct appeal to propel forward Europe’s economic recovery with the help of American food aid.

“Buy only what you need and what you cannot do without,” Truman implored. 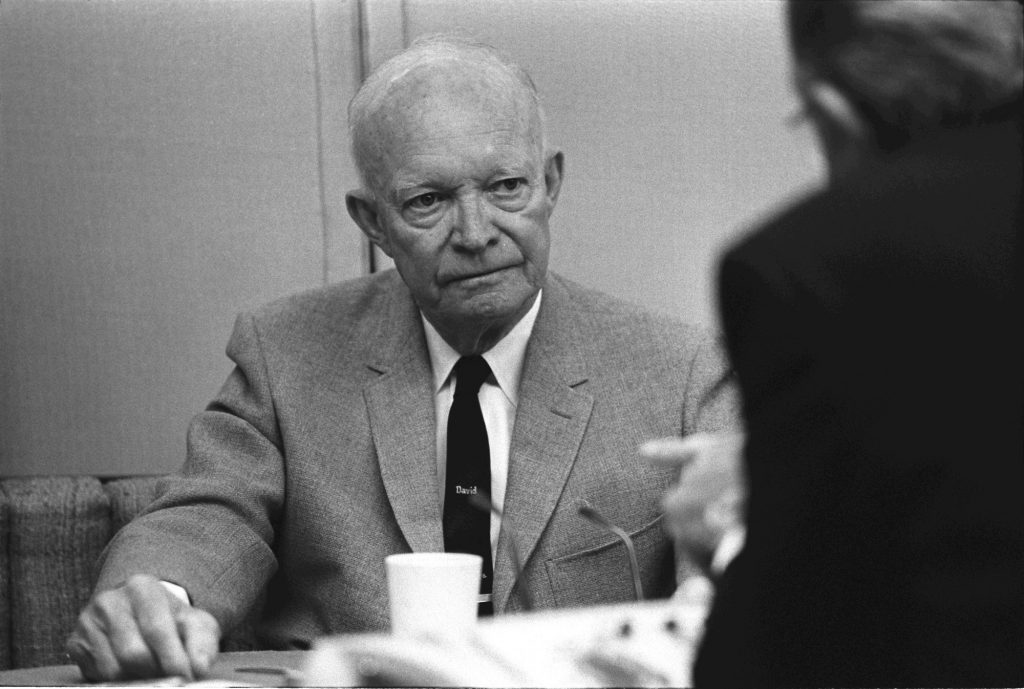 Almost a decade later, a second U.S. president took the mantle of American leadership by introducing the foundation for what would become a powerful idea at the heart of U.S. food policy: Food as a tool for peace.

The U.S. Food for Peace program, originally signed into law by President Dwight D. Eisenhower as the Agricultural Trade Development and Assistance Act, was designed to support U.S. interests abroad — humanitarian, economic and geopolitical — and reduce large stocks of crops in the United States after the introduction of federally-subsidized agricultural programs.

“We must never forget that there are hundreds of millions of people, particularly in the less developed parts of the world, suffering from hunger and malnutrition, even though a number of countries, my own included, are producing food in surplus,” Eisenhower said. “This paradox should not be allowed to continue.”

The newly created WFP delivered food to Iran after the September 1962 earthquake.

A Global Organization Rises to the Challenge – 1961

In his 1960 speech, Eisenhower implored the United Nations to pool the goodwill of the world and spearhead a project that would provide food assistance to countries in need through one unified voice and mission.

George McGovern, then director of the newly rebranded U.S. Food for Peace Program, proposed the creation of a multilateral food aid program with the support of U.S. lawmakers. Seven months later, the UN General Assembly established the World Food Programme (WFP) during the presidency of John F. Kennedy.

When an earthquake hit Iran in September 1962 — followed by a hurricane in Thailand one month later — WFP delivered food to those in need. The agency was up and running before it could walk, so to speak, and would continue to provide food and logistical support in emergency situations around the globe. 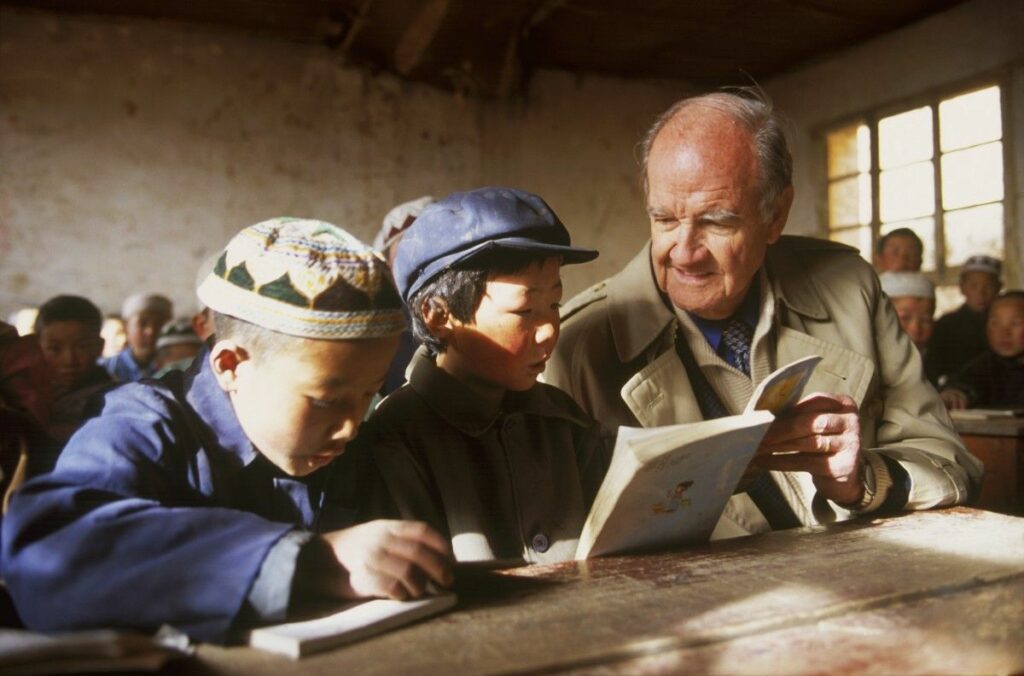 In the late 1990s, two Congressmen started working together on a new project to end hunger and strengthen educational opportunities at the same time. Both had seen the impact of hunger with their own eyes, first as young boys during the Great Depression and later as military officers during World War II. 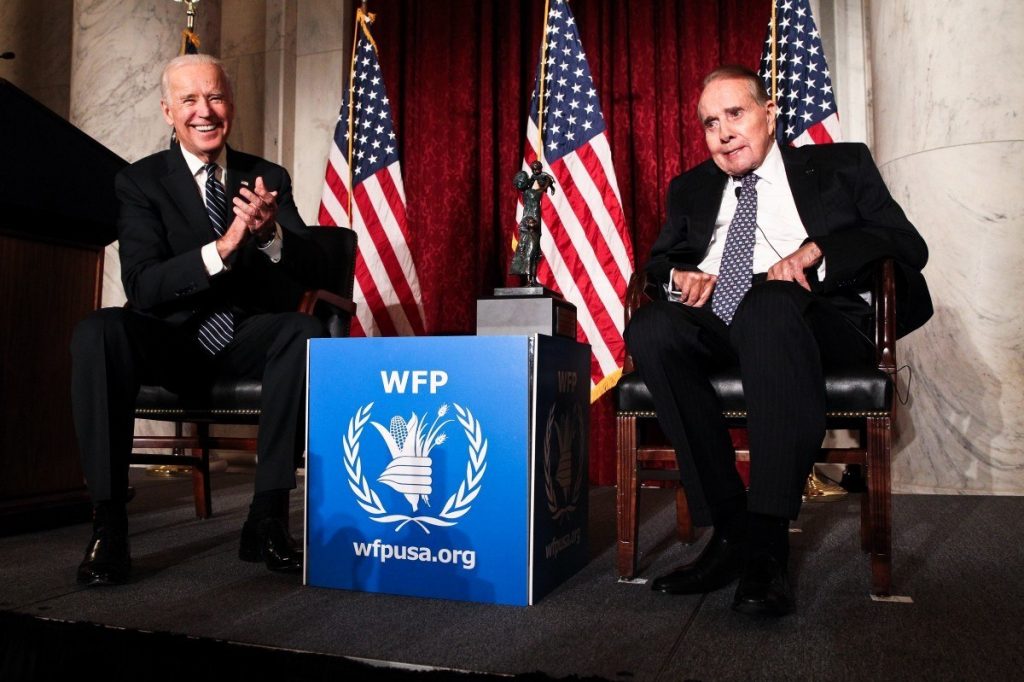 The program put America’s mark on the belief that children should never have to forgo education because they are hungry. Humanitarian agencies like WFP could now stock school meals programs overseas using U.S. crops and leverage financial and technical assistance from the U.S. government.

Since its inception, the McGovern-Dole program has provided meals to more than 22 million children in 41 countries.

The initiative simultaneously improves children’s nutrition, their ability to learn as well as their chances at economic success. The program also gives poor families an incentive to send children to school, especially girls. 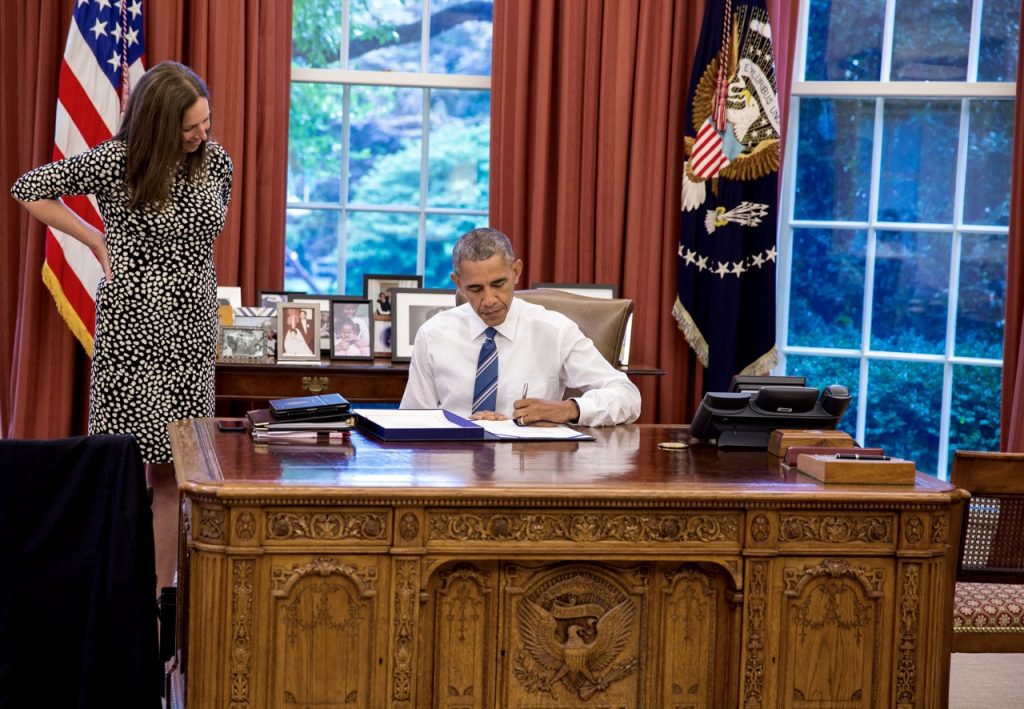 In July 2016, President Barack Obama signed into law the Global Food Security Act (GFSA) — the latest bipartisan milestone in the fight against hunger.

With strong support on Capitol Hill, including 369 votes in the House of Representatives, the achievement sent a message that the United States would continue its leadership on making sure those who wake up hungry have the food they need to lead healthy, productive lives.

The GFSA ensured that future administrations have flexibility in how U.S. food assistance is delivered overseas. From delivering food straight from America’s farms to the support of cash programs that help develop local markets for small-scale farmers abroad, the GFSA gives agencies like WFP the ability to use the right tool at the right time to alleviate hunger during times of crisis and peace.

It also put good nutrition for women and children at the center of a commitment to accelerate economic growth around the world. By focusing on the reduction of child stunting through the promotion of nutritious food and diet diversification, the GFSA positioned maternal and child health as key to global food security.

Where Do We Go From Here?

World Food Program USA is proud to be part of a strong and diverse coalition of voices calling for hunger relief to remain a bipartisan issue in the years ahead.

The Global Food Security Act was the latest milestone in a long American legacy to feed the world’s hungry, dating back to the words and actions of Presidents Truman and Eisenhower to the creation of WFP and the stroke of President Obama’s pen in 2016.

Current and future administrations will inherit this bipartisan legacy at a time when the world has set its sights on ending hunger by 2030. It’s an especially ambitious goal given the global refugee crisis and the impacts of a changing climate that are driving more people into hunger.

Learn more about previous U.S. Presidents who played a role in fighting hunger.

Progress will depend on you, our ZeroHunger heroes. You make it possible for the World Food Programme to reach people in some of the most dire circumstances in the world — and your support is needed now more than ever.

*Ash Kosiewicz is the senior communications manager at WFP USA.

Our Future Begins With Food