Skip to content
Home > Newsroom > A Meal Around the World: ... 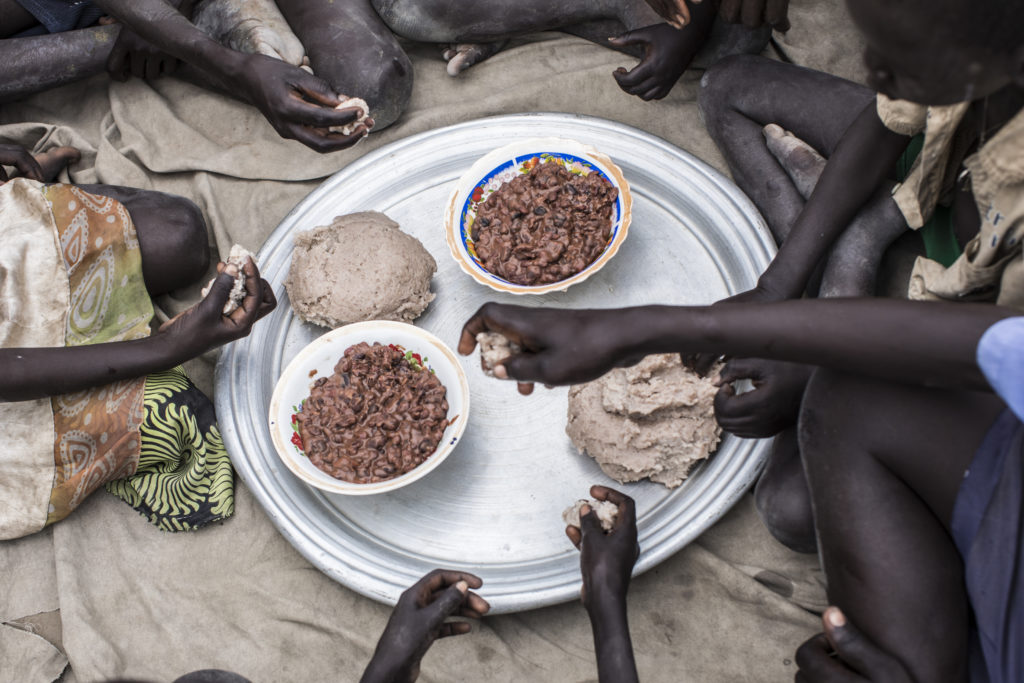 A Meal Around the World: What a Plate of WFP Food Looks Like in 9 of the World’s Hungriest Countries

Many of the people we write about rely solely on the United Nations World Food Programme (WFP) for their basic needs. And the needs of people who live in extreme poverty, conflict zones and refugee camps are varied. Some need safe places to live, some need schools, others need access to healthcare. But the one thing they all need is food.

This is where the U.N. World Food Programme comes in—from beans and grains to snack bars and micronutrient powders. Food brings families together everywhere, especially when times are tough. As Americans gather around the table to share a Thanksgiving meal today, let’s take a look at the meals that provide both survival and solace across the globe—whether it’s chicken soup in El Salvador or lentil porridge in Bangladesh. 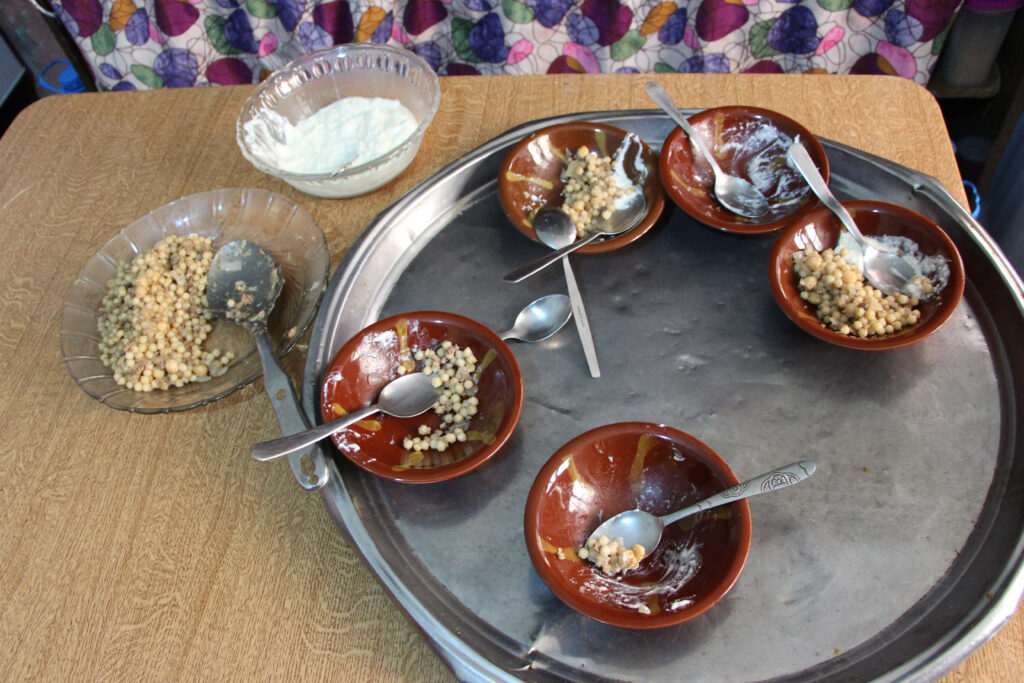 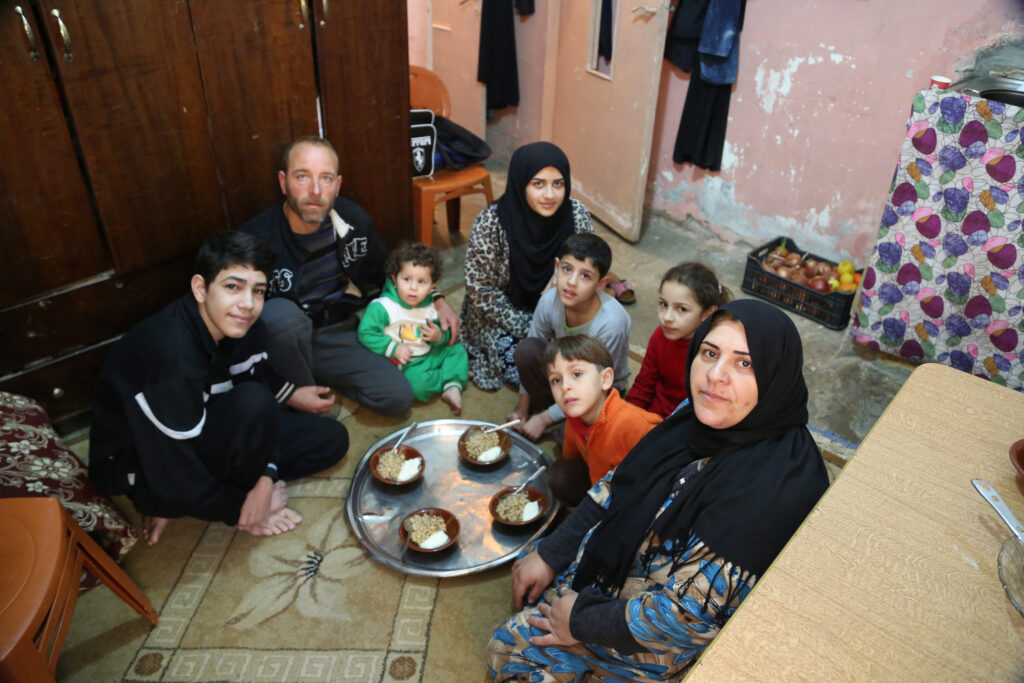 Rajaa (far right), her husband and their six children enjoy a meal of meat stew in their two-bedroom Beirut apartment. The stew is Rajaa’s favorite dish, which she makes with onions, butter, couscous, meat, yogurt and some secret spices. It’s also a rare treat. The refugee family, which fled Syria in 2012, depends entirely on external support for survival, including $27 a month that WPF provides each family member to buy food.

“We can only afford meat twice a month,” Rajaa explains.

For refugee families like Rajaa’s, being able to re-create a favorite meal means a lot. After being away from home for five years, maintaining such traditions helps keep the memory of home alive. For Rajaa, making her mother’s meat stew is something to look forward to every other Friday. It is an anchor and a source of stability in a time of uncertainty.

2. Rice and Beans for Children in Mozambique 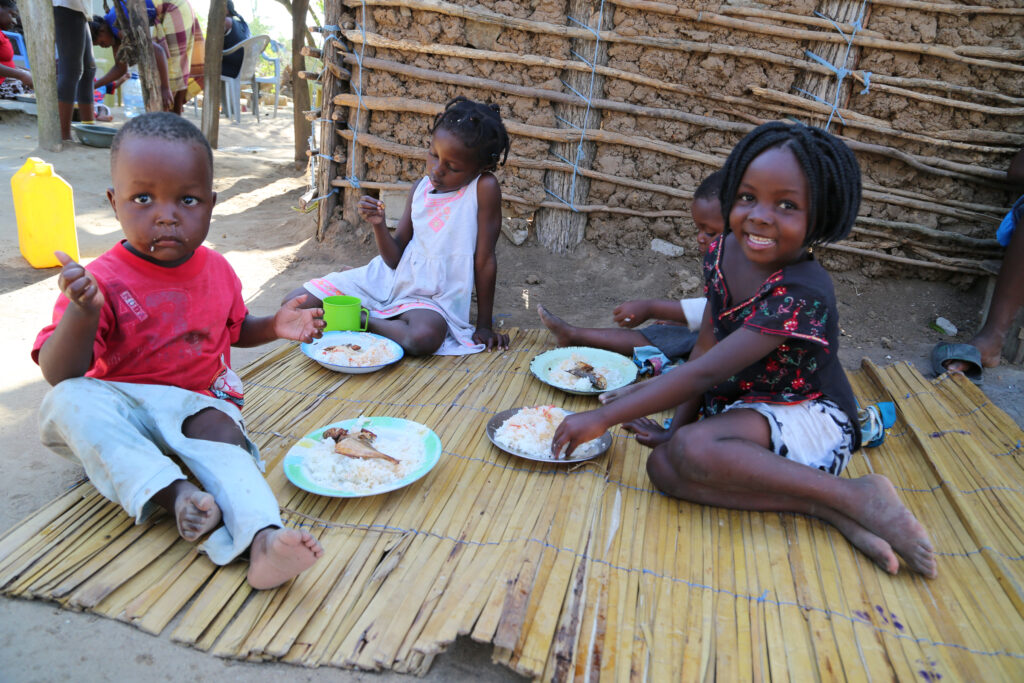 It’s hard to believe this smiling little girl’s home in Mozambique had just been destroyed by Cyclone Idai when this photo was taken. She and a dozen other family members were living at their great-grandmother’s house after the floods destroyed crops in the area and most people lost their jobs. In this photo, some of the younger family members have come together for a warm, humble meal of rice and beans. The U.N. World Food Programme supported the government’s disaster response by providing lifesaving food assistance to local communities, including two-week rations of rice, beans and cooking oil. For this little girl and her fellow diners, this was their only meal of the day.

3. Chicken Soup with Homegrown Vegetables for Family in South America 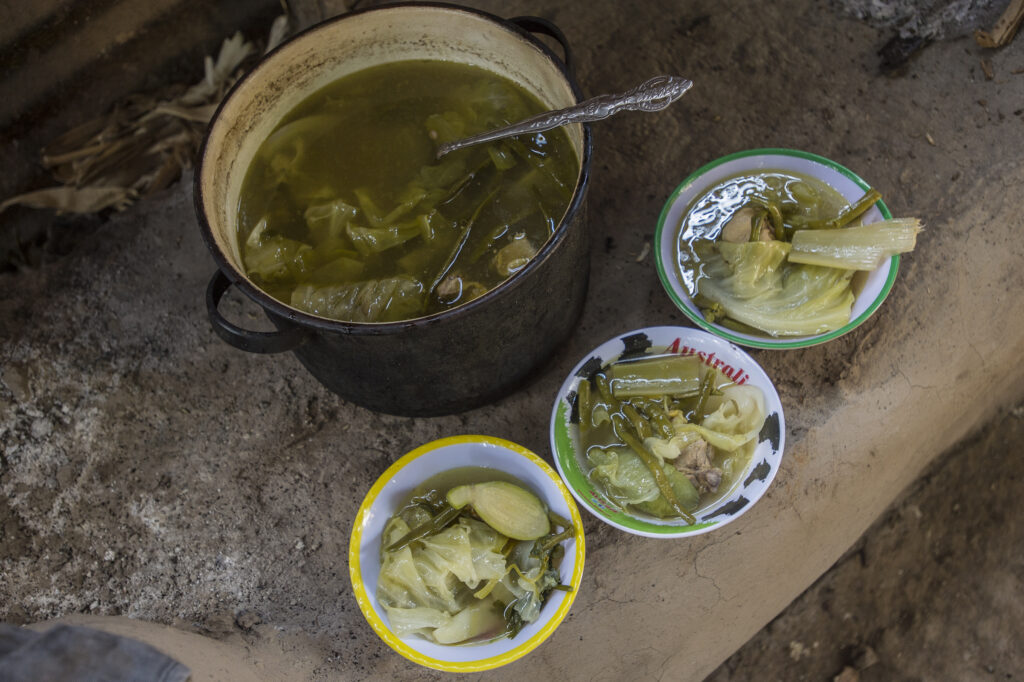 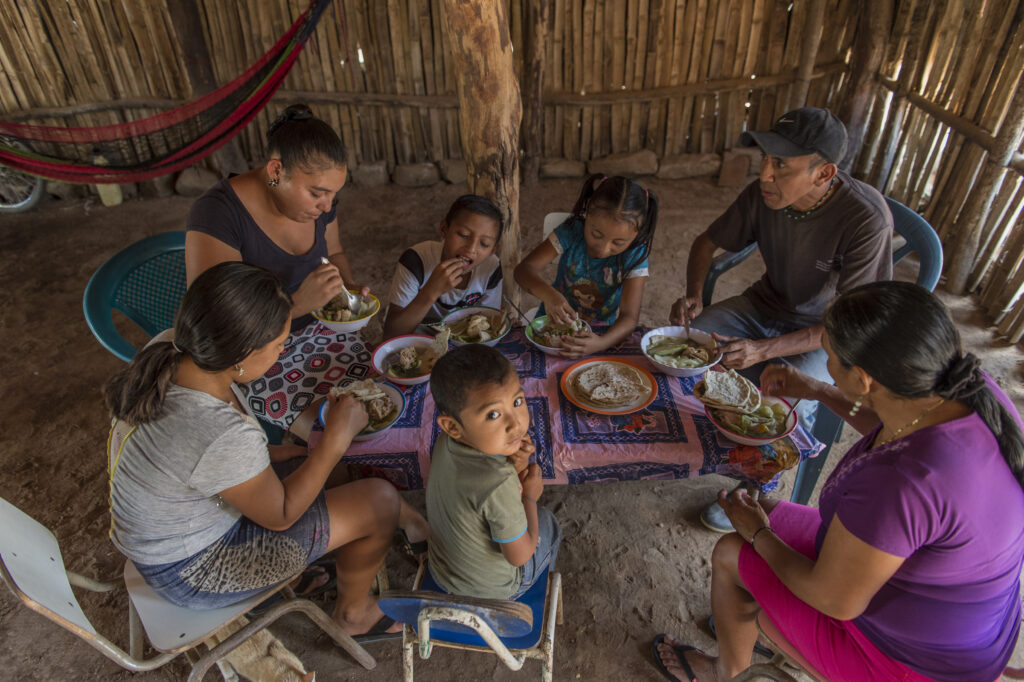 Cristina Martinez Perez (top left) and her family enjoy a meal of chicken soup that she made. As part of a Resilience and Climate Change Program, the U.N. World Food Programme provides agricultural training in Cristina’s community on topics like soil conservation and irrigation. Families now have access to a wider range of foods—like tomatoes, sweet peppers, eggplant, green beans and squash—and can earn money by selling the surplus. Participants receive vouchers from the U.N. World Food Programme for their participation in the program, which they redeem for cash at local banks and use to purchase food for their families. Chicken soup is a rare site on Cristina’s table. She only makes it when she receives her U.N. World Food Programme voucher, as she cannot afford the ingredients without it.

4. Rice and Lentil Porridge for Rohingya Refugees in Bangladesh 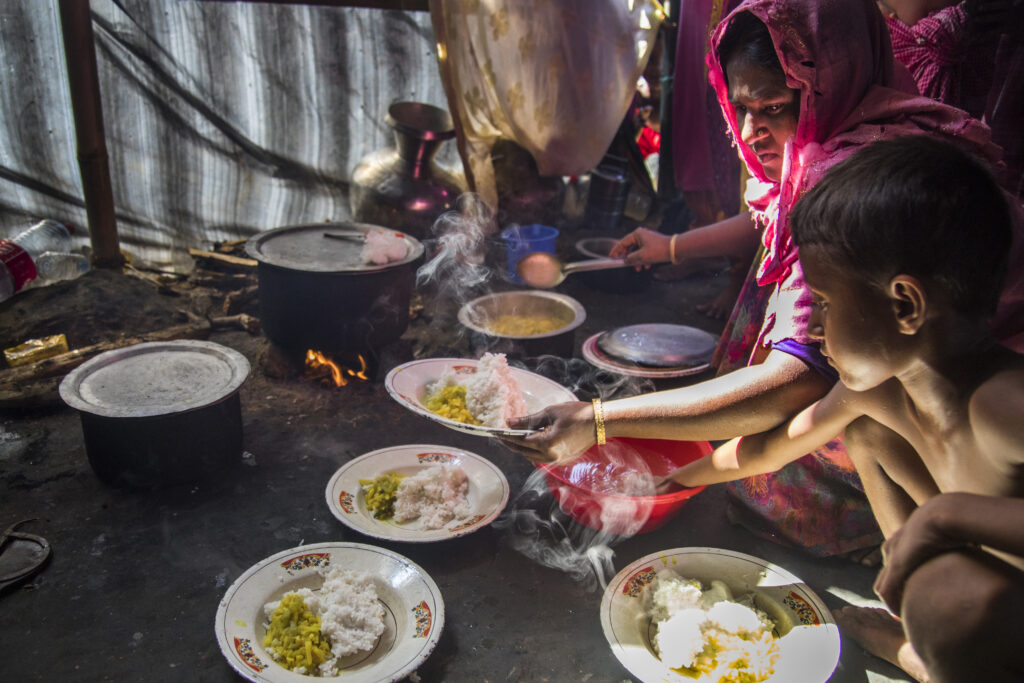 Hanufa is preparing a hot lunch of khichuri: a kind of rice and lentil porridge. She and her family are part of the hundreds of thousands who fled from violence in Myanmar to seek safety in Bangladesh. WFP has been providing these refugees with high-energy biscuits and has been supplying rice to community kitchens, where people can get a warm bowl of comforting khichuri. Food distributions, even simple ones such as these, provide solace to people arriving at the overcrowded camps – hungry and desperate – looking for somewhere to take shelter and rest. Most arrive nutritionally deprived, having been cut off from a normal flow of food for more than a month.

5. Sorghum with Beans for Family in South Sudan 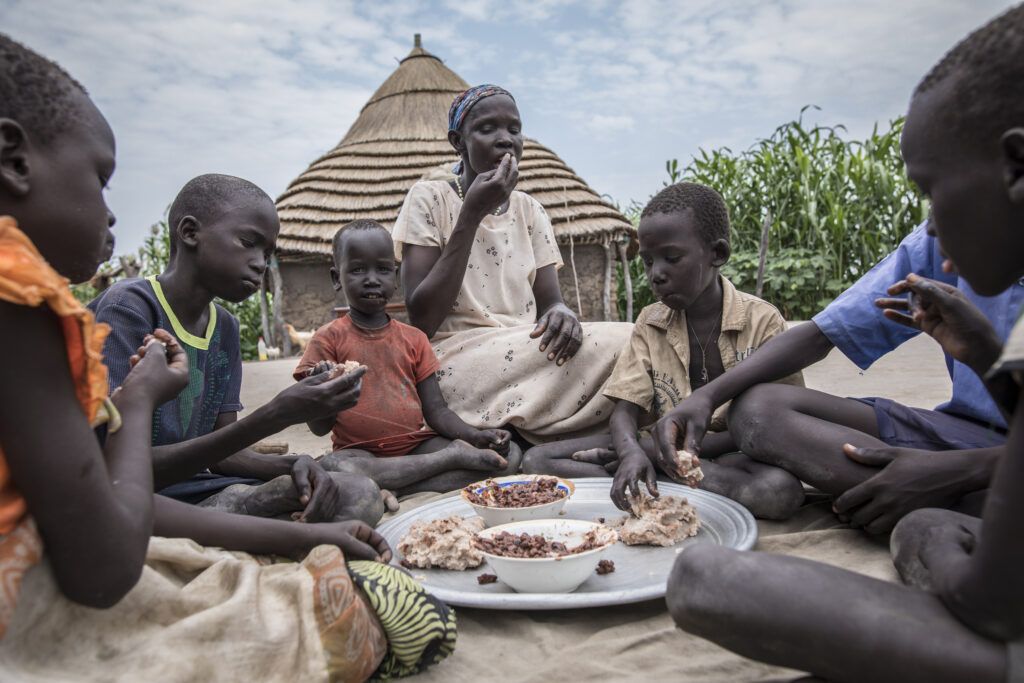 Nyanut Lual Aleu, 35, joins her family for a meal of stewed beans and sorghum cakes, ingredients from the U.N. World Food Programme. Although hunger prevails in many parts of South Sudan, there are small pockets of stability where the U.N. World Food Programme is helping locals close short-term hunger gaps and build resilience against future challenges. Nyanut is very happy to be part of the program. “My life changed completely since I am in the program,” she says. “I was able to build a new house and send my seven children to school. Now I can buy what is important for me. I am improving little by little. Now I cultivate my own food in my garden, I am so happy!”

6. Vegetable Stew, Bread and Rice for Family in Yemen 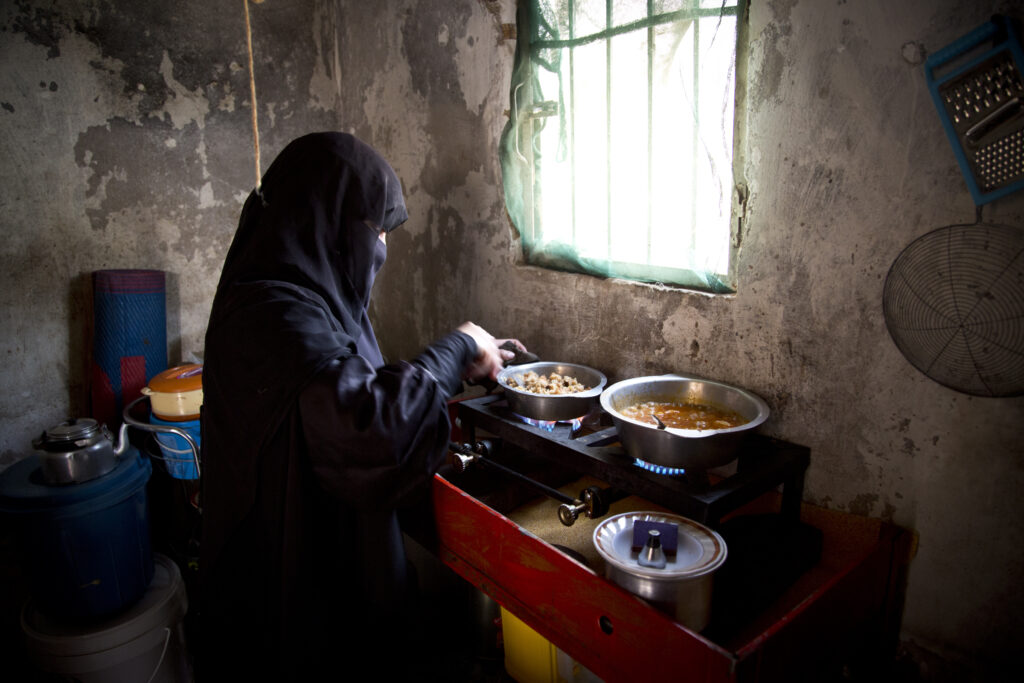 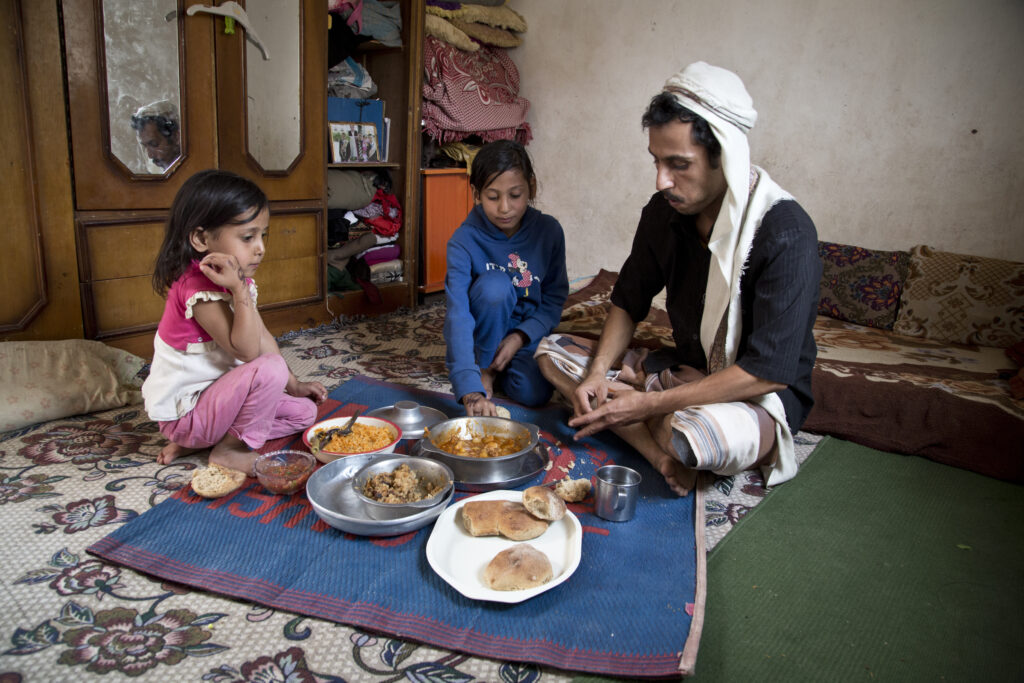 Walid and his two eldest daughters are getting ready to eat a simple lunch of bread, rice and a traditional Yemeni vegetable stew called salta, which his wife prepared. The war in Yemen has left nearly 20 million Yemenis uncertain of where their next meal will come from. Walid’s family depends almost entirely on the U.N. World Food Programme food assistance, which is a ration of beans, oil and wheat flour, which they use to make the bread. It keeps them stocked for most of the month.

“Today is the end of the month,” he says, “so we do not have much food left, but at least we do know that some help will be on the way soon.”

7. Vegetables, Rice and Noodles for Family in the Philippines 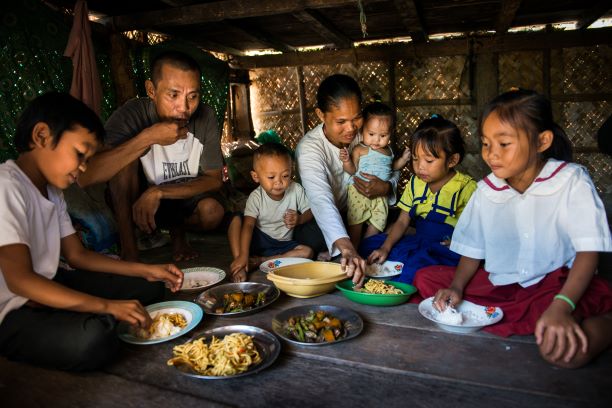 This family from Maguindanao in the Philippines is sharing a diverse meal of vegetables, rice and noodles. The carrots, green beans and onions provide vital micronutrients while the U.N. World Food Programme fortified rice is high in vitamins and minerals like Vitamins A, B6, C and Iron. U.N. World Food Programme assistance in the region focuses on increasing long-term food security while helping communities prepare for disasters. These humble meals are bright spots for families who oftentimes only eat once a day.

8. Chicken, Rice and Tomatoes for Syrian Refugees in Jordan 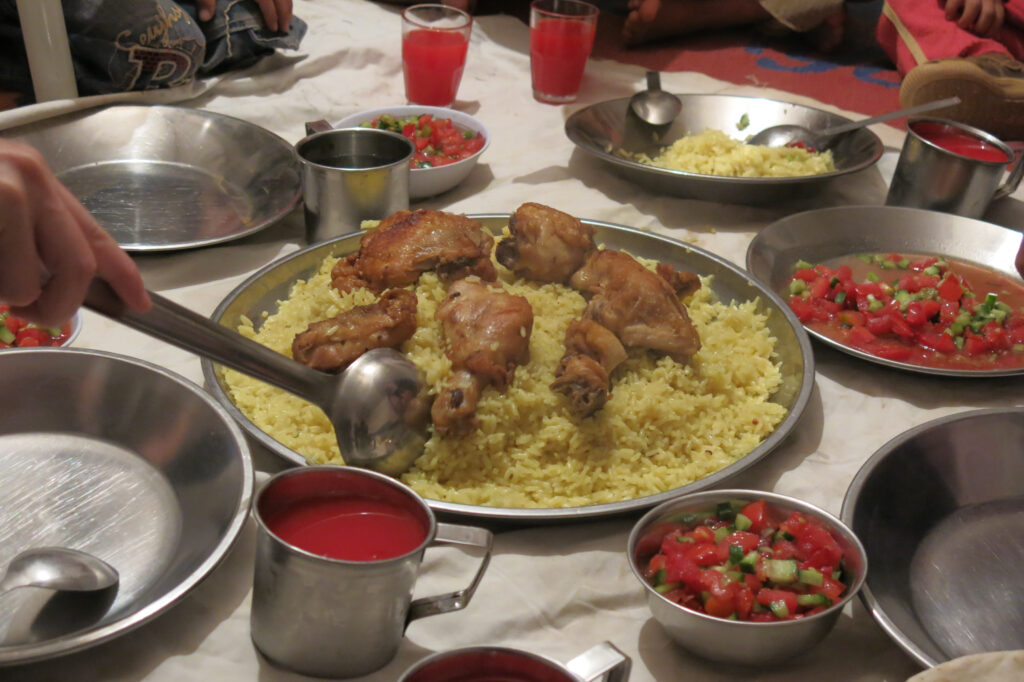 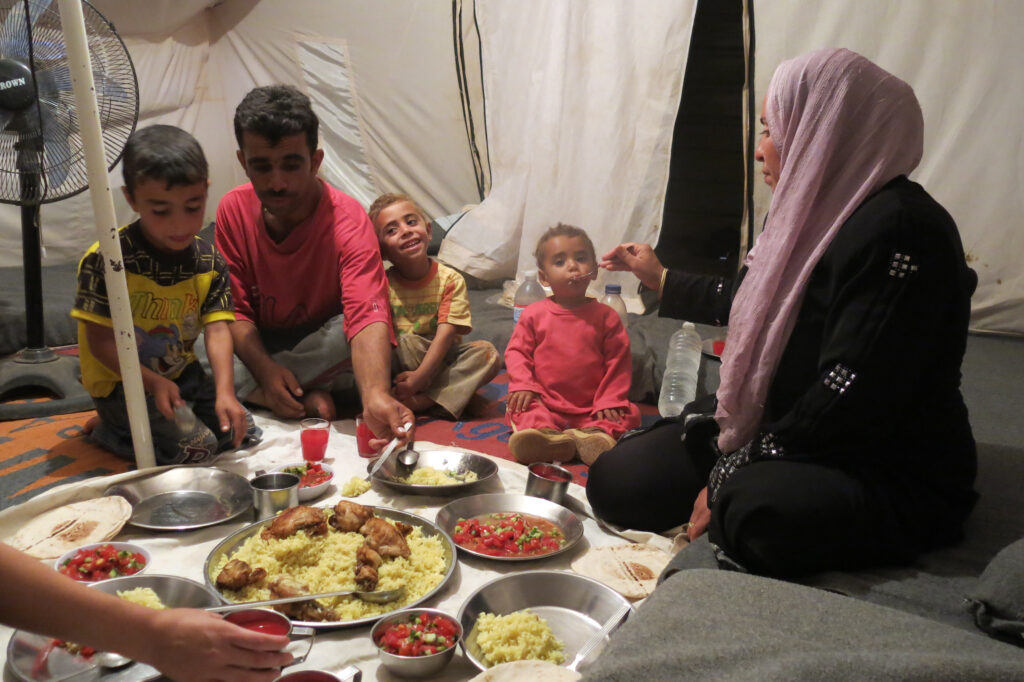 Abu’s family fled from conflict in their hometown in Syria to take refuge in Jordan. Here, they break their fast on the first day of Ramadan with a meal of chicken, rice and tomatoes. Abu was a builder and stonemason before the fighting, but he can’t find work anywhere these days, though he’s sometimes hired for a few hours as a porter in the camp, carrying goods around by wheelbarrow. The U.N. World Food Programme has been delivering urgently-needed food assistance to Syrians living in these transit centers in Jordan since the start of the violence.

9. Pita Bread with Beans and Vegetables for Syrian Refugees in Turkey 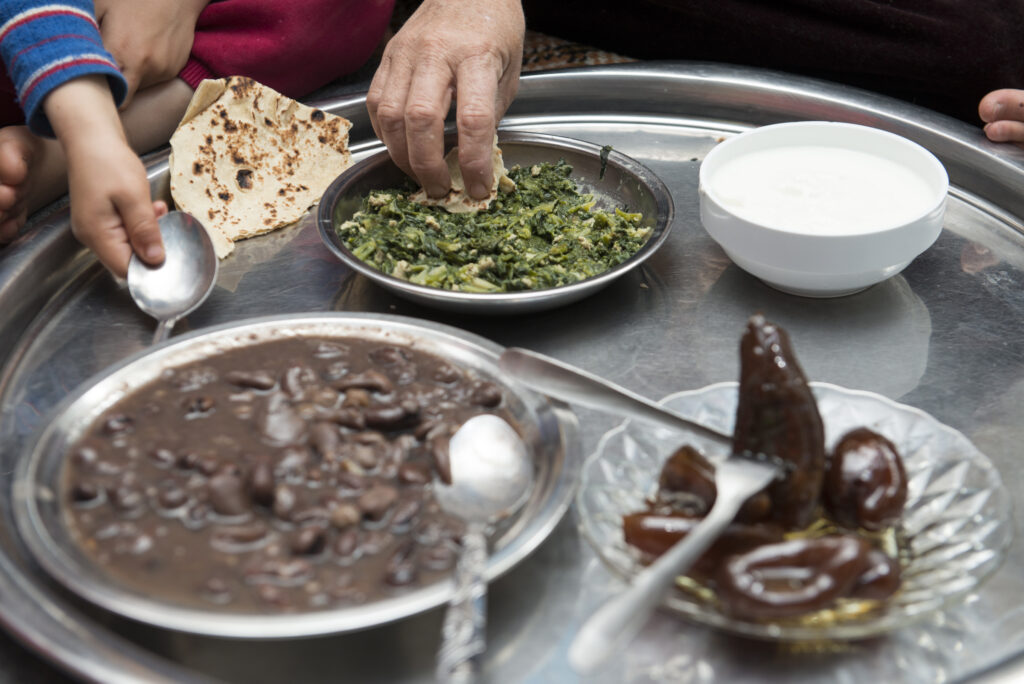 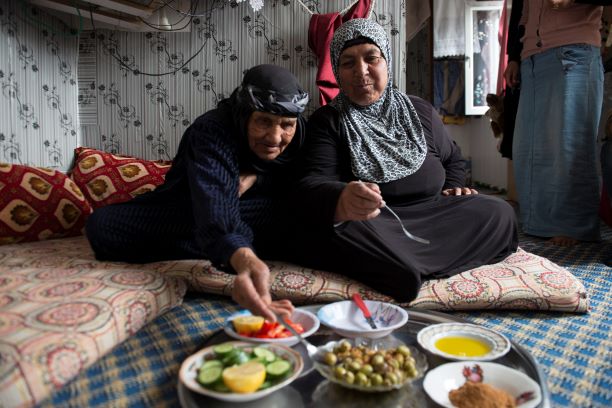 “Come on, have some!,” said the two Syrian ladies inviting their guests to partake of the colorful platter they are sharing, which includes olives, tomatoes, cucumbers and a few other small dishes. It’s barely enough for one adult, much less two or more, but the act of sharing is important to them. They are living in one of 25 camps in Turkey, built and run by the Turkish government to accommodate Syrian refugees. The U.N. World Food Programme has been providing electronic debit cards to the refugees, which enables them to do their own grocery shopping. The cards are the reason for the fresh produce seen here, which would be out-of-reach otherwise.

Whether they’re managing to survive on one meal a day or doing their best to make a meal out of little more than rice, the resilience of hungry families around the world has us feeling extra grateful right now. Despite the challenges around them, they’re carrying on culinary traditions, preserving family recipes and building community with what little they have. Mealtimes reveal the universal comfort and sense of belonging that even a simple loaf of bread can bring about, and the U.N. World Food Programme works tirelessly to ensure that this basic human right is afforded to the world’s most vulnerable people.

Learn more about the types of food WFP delivers.

Learn about the countries WFP works in. 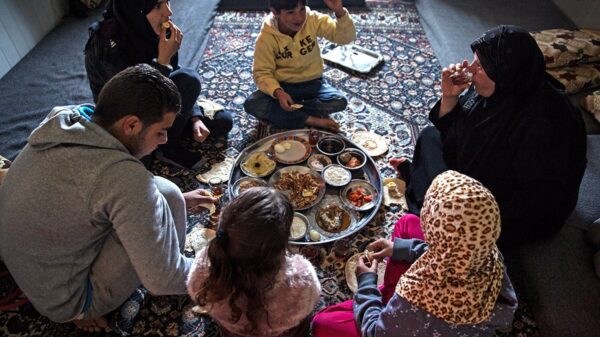 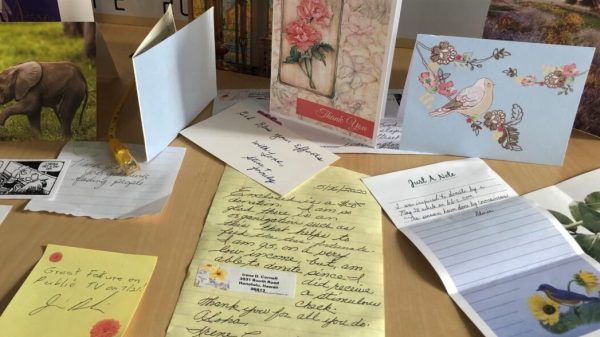 The Way You Give Inspires Our Work: Seven Stories From Donors Who Help Us Save Lives 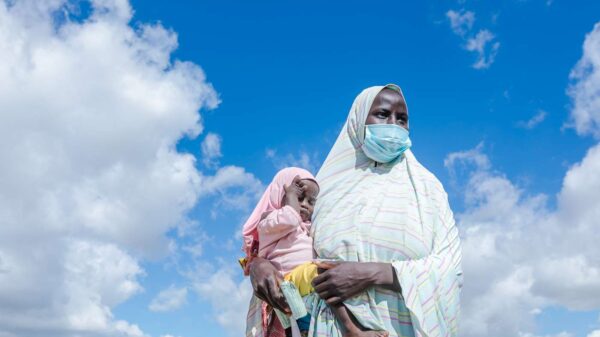 Children at War: Six Stories From the Most Dangerous Places on Earth

Handmade Toys by the World’s Most Resilient Children
GIVE TODAY