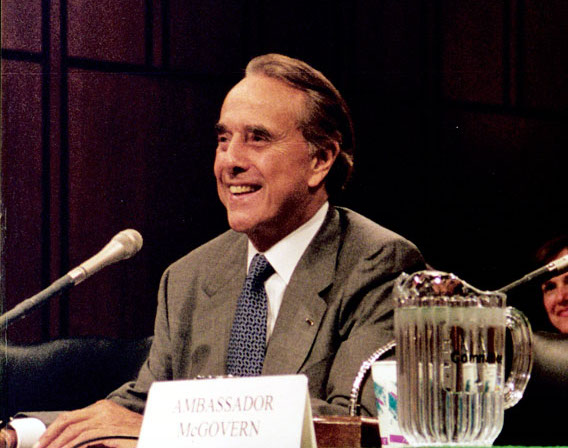 For what would have been his 99th birthday, we are honoring Bob Dole and reflecting on his extraordinary contributions towards the domestic and global fight against hunger.

Bob Dole first witnessed hunger and poverty as a child during the Great Depression, and later while serving in war-ravaged Europe during World War II. What he saw impacted the trajectory of his life: He went on to dedicate his career to public service and hunger relief.

In 1960, he was elected to Congress from his home state of Kansas and was elected to the Senate in 1968. Nearly every U.S. government program designed to prevent and address hunger since his election bears his imprint. Dole’s efforts to end hunger became central pillars of our country’s safety net system and a profound statement about our values as Americans.

During the 1970s, Dole teamed up with Senator George McGovern to reform America’s food stamp program (now known as SNAP), expand the domestic school lunch program and establish the Special Supplemental Food Program for Women, Infants, and Children (WIC). Today, more than 30 million children in the U.S. are fed by the school lunch program he helped establish.

Dole retired from the Senate in 1996, but his efforts in hunger relief didn’t end then. In the late 1990s, he teamed up with McGovern once again to apply lessons from the national school lunch program to the world’s poorest classrooms – ensuring kids everywhere have a nourishing meal. Thanks to their efforts, the aptly named McGovern-Dole International Food for Education and Child Nutrition Program was established in 2002.

What began as a powerful idea has since grown into a global school meals program that has fed millions of children in need. This important work has helped ensure that children throughout the world receive a meal in school — often the only meal they get that day — not only providing the necessary nutrition, but drawing children to school, helping transform their hunger into hope and opportunity. In recognition of their work, McGovern and Dole were awarded the World Food Prize in 2008.

Dole was a founding board member of World Food Program USA and a lifelong champion for anti-hunger causes both at home and abroad. He truly left behind a legacy by making an invaluable impact on the fight against hunger.

Read about some of history’s other hunger heroes: