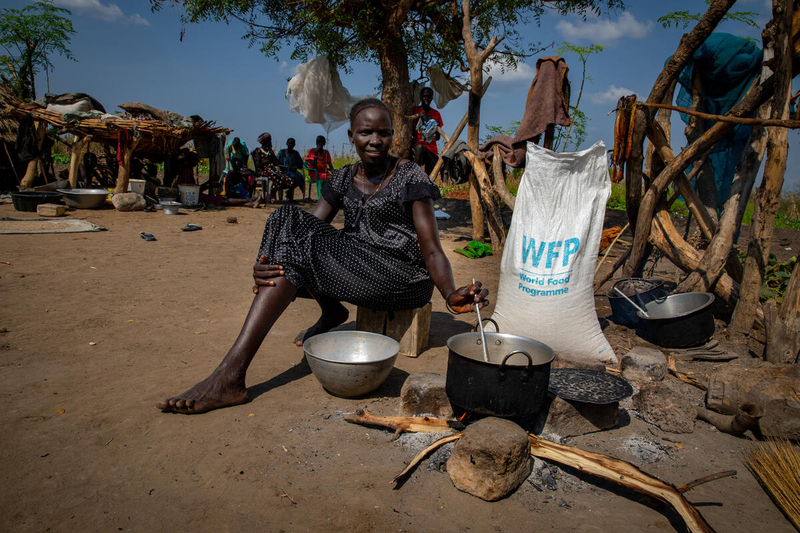 What Causes Famine in the World?

Our global food production system grows in size and output every single day. That means there’s enough food on this planet to feed every single person.

But even with all this abundance, famine is no relic of the past. In fact at this moment, more than 40 million people stand on the brink of deadly hunger. And by the time famine is officially declared, it’s too late: tens of thousands are already dying of hunger.

Thankfully the United Nations World Food Programme (WFP) has the expertise, international presence and operational capacity to stop famine in its tracks, pulling communities back from mass starvation. As the largest hunger fighting organization on the planet, we work around the clock to stop hunger.

Read on for a closer look at the devastating – but preventable – scourge that is famine.

So what’s the actual definition of famine?

Here’s how it works: Famine is declared in an area when severe hunger is already widespread, and when people have started dying of starvation because they don’t have access to sufficient, nutritious food.

There are a few official United Nations parameters that define famine. Famine is declared in an area when:

And what causes famine?

There’s one violent, overwhelming cause of famine right now: conflict. War is what currently drives most people in our world into hunger. 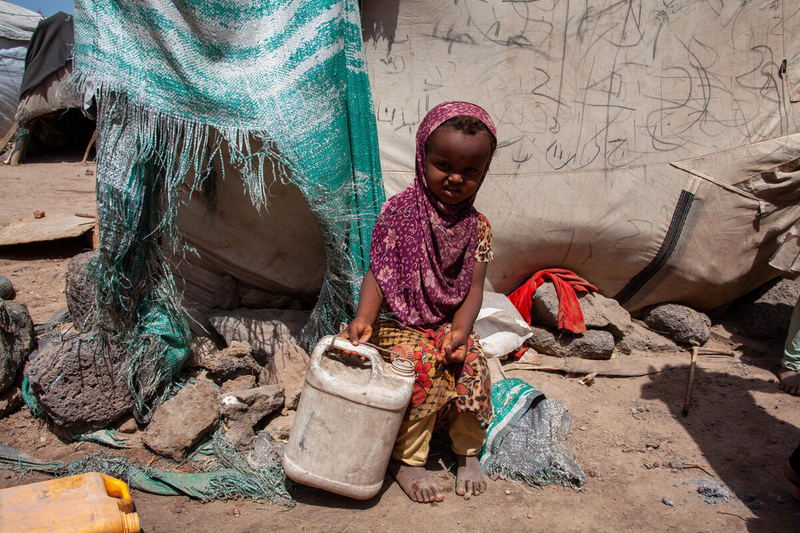 Three-year-old Fatooma lives in an Internally Displaced Persons (IDPs) camp. She and her family fled when airstrikes flattened in their village in Yemen.

How? Violent conflict pushes entire communities of people from their homes, their land and their jobs. This creates millions of refugees who then do not have access to the resources that usually keep them fed, healthy and stable. Finding food in unfamiliar, isolated and often bleak terrain becomes nearly impossible. Violence also sends larger shock waves across the region: destroying infrastructure and roads, killing jobs, halting imports, and sending food prices skyrocketing.

The next major cause of famine? Climate change. Our warming climate is starving vulnerable communities around the world by bringing increasingly devastating weather that destroys land, homes, livestock, and crops.

Inequality is another crucial factor. As the cost of living rises, urban households are unable to afford food to put on the table for their families. And for the millions suffering from chronic poverty, even staple foods are beyond reach. Gender inequality means women are more likely than men to suffer from hunger and malnourishment. In many cases, women eat last and least. 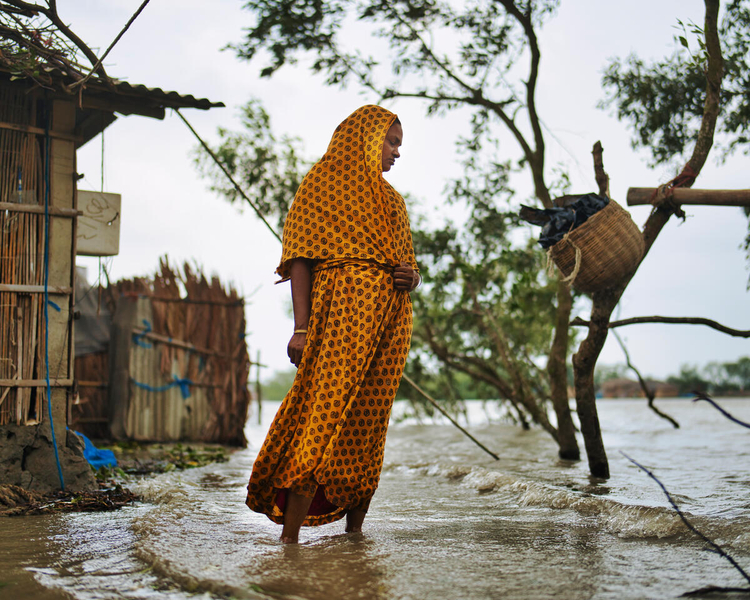 COVID-19 and increasingly extreme weather are driving more and more Bangladeshis to hunger.

Learn more about what causes hunger, and eventually famine.

How does famine affect communities?

Famine is the most disastrous form of widespread hunger. In affected areas, millions of people are in desperate need of food and water and on the move in search of resources. They’re skipping meals to make food last longer – especially mothers with hungry kids. To find food, families are forced to beg or forage.

And as the World Health Organization puts it, “between starvation and death, there is nearly always disease.” Severe hunger leaves the body vulnerable  to infectious diseases like cholera, malaria, pneumonia and measles, which can spread through communities like wildfire. The sickest and most malnourished die. And the repercussions of famine are still devastating to those who survive it, leaving their bodies weakened for life. 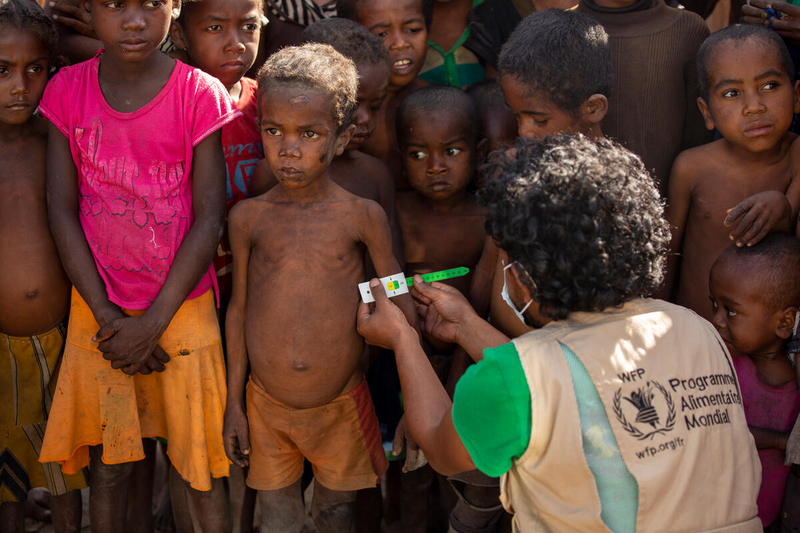 More than 1 million people in southern Madagascar are hungry after the worst drought in four decades.

“Famine is tragic, a horrifying moment in time, but it also leaves a legacy for the whole next generation,” explains the U.N. World Food Programme’s Acting Director of Nutrition Allison Oman Lawi. “When families, communities and nations are impacted by famine, it casts a shadow on their future. Malnutrition in children leads to stunting or chronic malnutrition that affects their health for life.

Where is famine worst around the world?

And the threat of starvation continues to grow in Afghanistan, the Central African Republic, the Democratic Republic of the Congo, Haiti, Honduras, Nigeria, Sudan, Uganda, Venezuela and Zimbabwe. All in all, more than 41 million people in 43 countries are currently on the very edge of famine and risk starvation. That’s up from 27 million people in 2019.

One more thing to know? The U.N. World Food Programme, “begins its response before a situation becomes catastrophic,” says Lawim. “We don’t wait for a declaration of famine or a survey on deaths, because once you are at the stage where people are dying, it really is too late, morally and ethically.”

Learn more about the places in the world with the worst famine.

How can we stop and prevent famine?

Before famine strikes, WFP uses its presence in the field, innovation and technology to identify, anticipate and warn the world of the threat of famine.

At every stage of famine, WFP harnesses its logistics and supply chain capabilities to move huge quantities of food to where they’re need most.

To avert the threat of famine, WFP works around the clock to provide food, nutrition and cash-based assistance to the world’s most vulnerable people.

Thankfully our deep-field presence, scale of operations and cutting-edge expertise developed through decades of fighting hunger make us uniquely positioned to fight famine. We use the latest technology to pinpoint where hunger is the worst in the world and make sure we are reaching those in dire need of help.

The most powerful tool we rely on in the face of famine? Food. Through direct or cash-based assistance, getting food into people’s hands is critical.

Our logistics and supply chain capabilities can move huge quantities of food to where they’re most needed — in extreme cases using airdrops and airlifts. On any given day, we have 5,600 trucks, 30 ships and 100 planes on the move. And every year, we distribute more than 24 billion meals (the equivalent weight of 389 Eiffel Towers).

We think ahead, and plan long term – not just responding to already full blown crises but working tirelessly day in and day out  to prevent them through nutrition programs, school meals, support for small-scale farmers, and helping families to afford a healthy diet.

Preventing famine is a choice. With enough resources and well-planned interventions , we can eliminate its threat entirely. But we need your help.

You Can Help Save Lives

People around the world are suffering from the affects of famine. Your donation will help rush food to those in need before it's too late.