BEIRA: The United Nations World Food Programme on Friday declared the Mozambique flood crisis a Level 3 emergency, putting it among a handful of top response priorities for the organisation, on a par with Yemen, Syria and South Sudan.

It follows the government’s declaration earlier this week of a national emergency – the country’s first – and request for international assistance. That triggered the activation of global, multi-agency ”clusters” to coordinate relief efforts on food security, logistics and emergency telecommunications (led or co-led by WFP) as well as on water and sanitation.

Satellite imagery shows numerous floodplains, including an “inland ocean” 125 km by 25 km – the size of Luxembourg – where water levels surged as high as 11 metres, submerging almost everything in their path.

An MI-8 transport helicopter contracted by the WFP-run United Nations Humanitarian Air Service (UNHAS) continued to airdrop food – including WFP high-energy biscuits (HEBs) and micronutrient-rich peanut paste used to prevent and treat malnutrition as well as tents, medicines and other essentials for stranded communities outside Beira.

Another 20 metric tons of biscuits airlifted from a WFP-operated UN emergency response depot in Dubai landed in the western city of Chimoio on Friday, and a further planeload is due to arrive in Beira on Saturday.

To date, more than 20,000 people have received WFP food assistance.

Two more UNHAS MI-8s, and two cargo planes with a capacity of 10 and 20 metric tons, are due to join the relief effort in the next few days.

BEIRA – The United Nations World Food Programme stepped up food distributions in and around Beira on Wednesday, with more airdrops of high-energy biscuits (HEBs) to isolated pockets of people stranded by the floodwaters and the delivery of easy-to-prepare fortified food to displaced families sheltering in schools and other public buildings in the town of Dondo, 45 kilometers north east of the port city.

Infants, children and elderly people hoisted to safety from rooftops across the vast floodplains and airlifted to Beira were also given HEBs, used in emergencies as they are nutritious, easy to transport, and don’t need cooking. The biscuits are part of a 20-ton consignment flown into Beira on Sunday from a WFP-run UN emergency response depot in Dubai. A peanut-based micro-nutrient rich paste to prevent and treat malnutrition is also being distributed.

An MI-8 transport helicopter contracted by the WFP-run United Nations Humanitarian Air Service (UNHAS) arrived in Beira Wednesday to support rescue and relief operations – the first of three helicopters due to arrive there this week.

The immense, wide-ranging international response has been facilitated by the government’s declaration on Tuesday of Mozambique’s first ever national emergency.

Mutinta Hambayi works for WFP in Malawi. Here she talks about her work as a nutritionist, some of the biggest misconceptions about her job and what she finds most rewarding about her job.

heading a Nutrition Unit with a diverse Nutrition and HIV portfolio in a large operation in Malawi, reaching 2.8 million people this year. I double up as Project Manager for research on prevention of stunting, which is a partnership with the Children Investment Fund Foundation (CIFF). I am also the chairperson of the Donor nutrition security group (Donuts), a consortium of 14 UN and development partners. 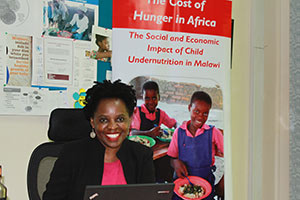 The most common misconception about my job is…

that nutrition, or the work around it, is only treating a disease, namely malnutrition.

that good nutrition is the foundation for an individual, a nation rich or poor and for economic growth. Nutrition is a bed-rock of human well-being, the ultimate realization of Zero Hunger. I see an entry point in everything everyone does because nutrition is a “harmonizing” area. All avenues of WFP programming must have explicit nutrition objectives.

A highlight during my time at WFP was…

by far in Sudan. I was thrown into the deep end of addressing an emergency – the aftermath of the Bahr Gazal war in 2000. You had to think on your toes. I had never seen so many severely malnourished children – it was a whole camp, it was heartbreaking. Fast forward, professionally I currently lead a cutting edge nutrition pilot on stunting.

The most rewarding part of my job is…

simply being a nutritionist in WFP and being able to contribute through an organization that reaches millions of vulnerable people. It feels like such a good fit for me.

The most frustrating part of my job is…

sometimes having little time to “think” and time for brain space. Sometimes I worry that I am just reacting and not applying a thought process for effective and lasting results. There are emerging issues of climate change, urbanization, resilience, social protection and so on which I must take on board for nutrition. As a technical advisor, I must see how my recommendations have far-reaching implications.

The main attributes you need for this job are…

adaptability and personal skills. Nutrition requires that you engage with many players. Of course you need technical competence and to be strategic in thinking, so that you can see and debate for a bigger and better picture – we can’t do nutrition alone.

nutrition is at a crossroads, for better or for worse. The opportunity to make good is now, when nutrition enjoys a high and unprecedented level of attention globally and within WFP.

Learn more about WFP’s work with maternal and child nutrition.